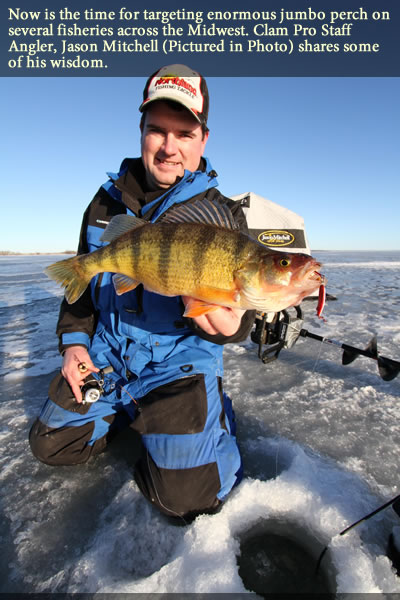 Strong perch patterns occur across the board at late ice. Typical locations include gravel and sand, subtle rolling structure that is connected to the shoreline is often productive. During the late ice period, perch often move shallow and if there is atypical rule of thumb regarding shallow perch, it is that they are aggressive and on the move. These fish run in packs and don't stick around. These nomads can be difficult to locate but when you find them, they often bite. Some lakes turn on during the day when the sun pops out, other lakes are morning and evening bites where the bite peaks when the sun is on the horizon. What is universal however is just how aggressive these fish get when you find them up shallow.

Each lake has a personality. Leech Lake has really kicked in as a great winter late ice perch factory. Many perch on Leech are coming off of large sand and sand grass flats where fish. Mille Lacs, Winnebago and Lake Winnie are also top bets that see suicidal shallow bites on jumbo perch. The Glacial Lakes of South Dakota is also noteworthy for enormous fish and Devils Lake, North Dakota is another top choice for true two pound giants.

Drilling an insane amount of holes is one proven tactic for connecting with these here today, gone tomorrow nomads. Finding fish means drilling and moving. When scouting jumbo perch at late ice, a few refinements with tactics, gear and mentality can also help you tag more jumbos this season.

Don't be afraid to use larger spoons and swim lures in shallow water. These fish are typically aggressive and they can see and feel larger profiles from further away. Once you call in a school of perch and they are stacked up vertically below you in an aggressive state of mind, they are typically going to take turns swinging at your bait. Chrome, gold and perch patterns are all top color producers but get in the mindset that big lures, plenty of flash calls in fish from afar and the more fish you have stacked underneath you, the better. When we are in search mode, we often jig very aggressively in an effort to call in fish and we don't slow or tone it down until several fish show up and stack below. Get the fish wound up where they stack above each other vertically.

On tougher bites where the bite hasn't hit full force, treble hooks typically have a little better hooking percentage and is what I prefer until we hit the peak of the day. The peak of the day can vary but typically occurs when the fish are at their most active and aggressive levels, That period of time when the fish are racing to you and chomp down on the lure, holding it. These fish make you look good. When you get on a torrid bite, exchange the treble hooks for larger single hooks as single hooks are much easier to unhook and speed up the down time between fish. Remember that you can prolong this intense activity by just getting the fish unhooked fast and getting back down to the fish. If the fish start to drift off or loose some of their intensity, a phenomenal tactic is to hook and hold a fish above the school. This struggling fish will often pull more perch up off the bottom in an aggressive state of mind.

Typically, the fish are not on a tear from sunrise to sunset. There will often be a peak of activity. On some lakes, sunrise or sunset is prime time. Other lakes see a run during the middle of the day or mid morning and afternoon. Once you get into the rhythm, you know when that prime time is going to be from recent experience. With that being said, you might have to coax the first few fish. When we have to coax more reluctant fish, soft tips or spring bobbers shine for distinguishing not only light bites but also lets the fish hold the bait longer which seems to help with hook ups. One of the most effective rod designs ever developed for this type of panfish bite is the Jason Mitchell Elite Series Meat Stick line up which features a feather light sanded glass tip that loads to a fast and abrupt back bone for better hook setting leverage. 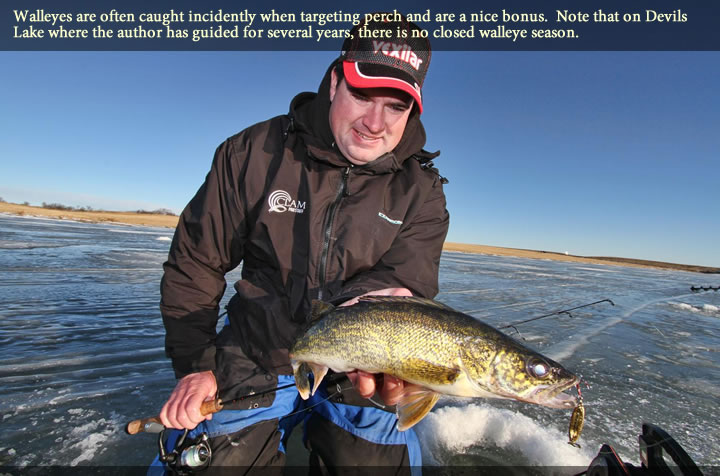 Typically, no finesse is required once fish get wound up so light sensitive finesse rod tips or light line can cost you fish on a really hot bite. On a hot bite, use a fast response high quality graphite rod (Jason Mitchell Elite Series 26 inch Perch) that has a quick tip for solid hook sets particularly when using spoons or swim lures. Heavier line like Northland Tackle Bionic seven pound test really lets you windmill through schools of fish because you can lift big perch out of the ice hole right to your hand without worrying about line breakage. Another tip is to fish high in the water to ring the dinner bell. Lures silhouetted higher in the water column can be seen from further away and also seem to put off more flash which is crucial for calling in perch. Even in ten feet of water on clear lakes, don't be afraid to fish five or more feet off the bottom Fish can see the lure from further away and as fish rise up to greet you, they just seem to become more aggressive. High fish often bite. Great tipping options include the classic pinched off minnow head but loading lots of spikes can also be effective. In the Dakotas where legal, perch eyes might be one of the better baits because they are durable enough to catch several perch. Other great options include pieces of soft plastic like Trigger X which has gotten so popular with the open water bass and walleye crowd. Hook the bait however so not only does the bait stay on during aggressive jigging strokes but also so that the hook is exposed for good hook sets. Trimming off the barb is another tip that can speed up unhooking fish. Anglers also can bend out the barb slightly and when using spoons, perch will often come unbuttoned by just banging the fish on the ice which greatly speeds up the time to get back down at the fish.

We are about to embark on one of the most productive periods of the entire ice period for anglers who love to target jumbo perch. Several good fisheries are starting to kick into high gear right now and with a few adjustments, anglers can turn good days of perch fishing into great days of perch catching.