By Dan Small - February 1, 2012
Nowhere in Wisconsin do anglers look forward to ice with greater anticipation than around the shores of Lake Winnebago and its sister lakes, Poygan, Winneconne and Butte des Morts. As soon as there is a three-inch shell on one of these lakes, they start to venture out.

Most anglers are anxious to get through the first-ice flurry of near-shore, walk-on fishing so they can settle down to winter's main event: tube-fishing for walleyes. I was introduced to tube fishing by Joel Taylor, of Omro, who spends nearly every day on the ice. Because he fishes so often, Taylor finds walleyes, and other anglers find him. If he wants to fish alone, he has to resort to borrowing a shack or vehicle from a friend to avoid playing Pied Piper.

Tube fishing is all about comfort and convenience. These lakes are big, and the best action is often several miles from shore, where there's nowhere to get out of the wind. Nearly everyone fishes from a moveable shack towed by an ATV or truck. Some fish directly from a customized vehicle.

That's where the tube comes in, right where the rubber meets the ice.

The "tube" is a length of PVC pipe, cut to fit between the floor of the shack (or car) and the ice. Its quarter-inch-thick walls stand up to abuse and help insulate the hole.

Since PVC pipe is measured by its inside diameter, a 6", 8" or 10" pipe mates perfectly with a hole drilled with an auger of corresponding size. Larger pipe can be used with smaller-diameter holes, too. 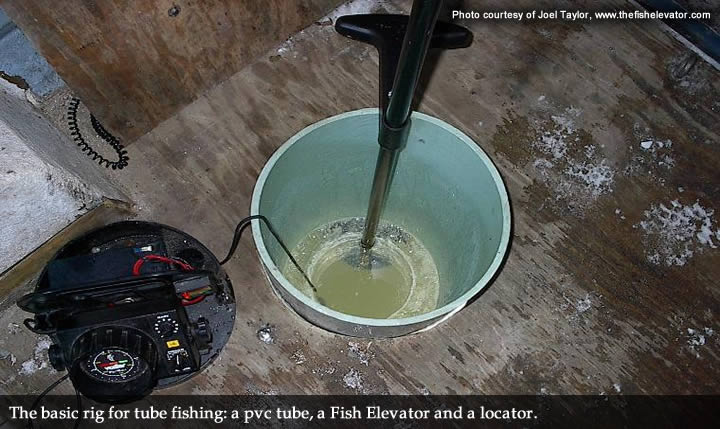 To outfit a two-man shack with tubes, cut two holes in the floor slightly bigger than the pipe, then cut two sections of PVC pipe long enough to reach the ice. Allow several inches of pipe so it doesn't drop through when fishing on snow-covered ice. Stow the tubes in the shack until you reach your fishing destination. Then push the tubes down to mark the ice, pull them back out and slide the shack out of the way. Drill two holes the right distance apart, pull the shack over them, slide the tubes in place and start fishing.

"Tubes keep the snow out on a windy day and keep holes from freezing over when you're fishing from a shack built on skis," Taylor said.

Or from a vehicle. And a tube lets you fish from a car with the door closed.

Taylor likes 10" pipe for shack fishing. Most vehicles require a smaller pipe, since you have to work around things like exhaust pipes and mufflers. Some minivans and SUVs have enough room to fish from the back seat and enough floor space to work with. For more room, slide the driver's seat forward while fishing. Unless you dedicate a vehicle to ice fishing (and some folks on Winnebago do that), cut a piece of plywood and thin sheet metal to seal the hole when you're not on the ice. Even if you just use your fishing car in winter, a hole cover will keep mice out and prevent trees from growing up through the floor while it sits idle all summer.

To drill holes for fishing from a vehicle, mark the ice with the tube as you would from a shack. Then jam a piece of 2x4 into the snow behind a rear wheel. Drive forward, drill your holes, then back slowly until the tire hits the wood and you'll be lined up. 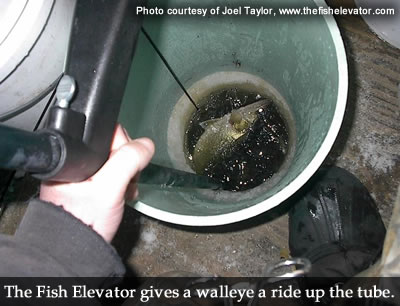 Taylor says Winnebago "Eastsiders" were the first to "tube out" a vehicle, but the trick has caught on around the lake. One drawback to fishing a foot or so above the ice, with or without a tube, is that you have to reach way down to grab a fish, or risk breaking your line as you try to lift it out. Some anglers use gaffs, but Taylor developed a device he calls the "Fish Elevator," which solves the problem nicely.

Like so many gadgets invented by ice anglers who have a lot of time to think while watching water freeze, the Fish Elevator is ingenious. It looks like an ice skimmer on a long stick, with a clamp to hold it out of the way under the ice when Taylor is fishing. When he gets a bite, he simply guides the hooked fish into the hole, then slides the elevator under it and lifts it out.

"When it's safe to go out on Winnebago, I usually start on the drops somewhere off of Oshkosh," Taylor said. "I look for suspended fish over a mud bottom in 14 to 18 feet of water, using a flasher, and I keep moving until I find them." 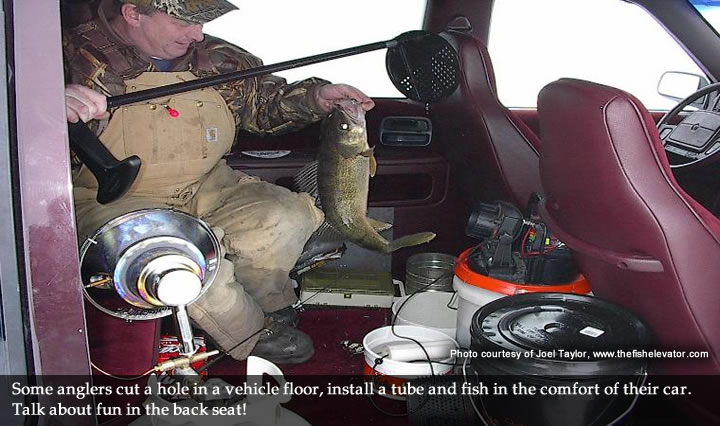 Taylor spends 20 minutes or so in one spot, then moves 300 yards and drills new holes. When he marks fish or baitfish, he starts jigging. Walleyes rise to take a bait or take it at their level. If a fish appears on his locator above his bait, Taylor reels his jig above the fish and tries to get it to bite.

"Most fish come through suspended, so I usually jig right at 10 feet," he said. "Some fish will come from above and some from below, so that depth seems to work best."

Taylor prefers No. 4 and 5 Swedish Pimples or No. 3 and 5 Jigging Rapalas, in silver, blue and red. He usually tips his lures with a whole shiner or shiner head.

Nearly every summer boat landing on Winnebago provides winter access. You can get on the ice at most roads around Oshkosh that dead-end at the lake. Be sure to check the ice for cracks and heaves near shore, as this is where most of the bad ice occurs.

For more photos of tube fishing, check out Taylor's Web site: www.fishelevator.com. If you're out on Winnebago this winter, look for him. He spends more time on the ice than he does at home.