Ghosts of the Lake 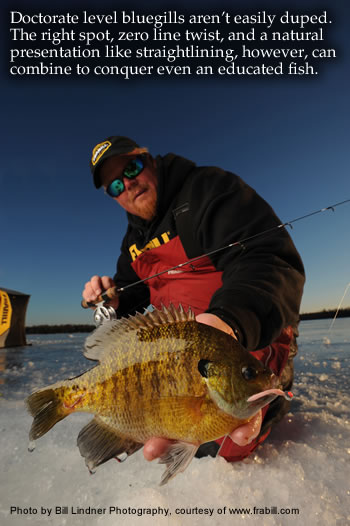 Few see them. Others either dismiss the sightings as hooey or are cursed to believe but never catch even a fleeting glimpse of one. These, you might call freshwater poltergeists, can be as common as the ghosts of missing mariners on pirate vessels, but still scarcely witnessed. Believers see them. Brian "Bro" Brosdahl sees them, and then catches them like genies in a bottle.

Bro is haunted by humungous panfish. They keep him awake at night. Cause him to swerve to the shoulder daydreaming on the way to find them. Difference between Bro and other ghost hunters, though, is his success rate. Bro captures them on hook and on film. And then like any steward of bluegill-building programs, he releases everything over 8-inches.

"Most viable panfish lakes have them," Bro asserts, "but not everyone has the knowhow to catch them. Even bodies of water that are overrun with small panfish usually hold a few monsters." To increase the capture rate, says Bro, a willing angler must evolve their conventional fishing techniques, the ones that work on run-of-the-mill panfish, but won't catch the eye of prehistoric panfish.

Bro talks about these older, sagely fish. "They're veterans - seen most every presentation out there. Think about it. In northern natural lakes, a bull bluegill has seen a lot of birthdays. They only grow about an inch a year, making a legitimate pounder ten years old. Football perch don't get that eye-popping length and girth until age eight or nine. Crappies grow faster, but have still spent years in the lake before achieving Facebook posting size."

Bro continues. "They laugh at black braided line and three season old 8-pound test. Literally, sonar pings can spook the bruins. And the parade of anglers walking over their heads is a thing of the past. Educated panfish avoid those parade routes, and find peaceful places to live."

Suddenly, Bro touches the brakes while citing his laundry list of do's and don'ts. The freshwater philosopher goes back to the subject of fishing line. "You know, I just can't leave the topic of line hanging out there. There's another issue that isn't addressed often - spinning. Crappy, coiled line makes your jig spin like a Spirograph." (To the younger set of anglers, that's whirling tabletop toy from the 70's that produced psychedelic paintings.)

"In real life," says Bro, "waterlife - panfish food - doesn't twirl like a top. Zooplankton pulse and propel through the water, but don't' act like a kid trying to get dizzy. To panfish, especially seasoned specimens, that's a turn-off."

Spinning is common with junk spinning reels, particularly when paired with over-weighted or ancient, coiled fishing line. Smooth turning reels like those on Frabill's Bro Series Combos don't have a Twizzler effect on the line. But if Bro really wants his jig balanced on a tightrope, he employs the Straightlining technique, which requires specialized equipment. Frabill's Straight Line Combo takes up line like rolled carpet on its fly-fishing-styled reel. Likewise, the line lets loose like a pulley, no twists or turns. Easy on, easy off. 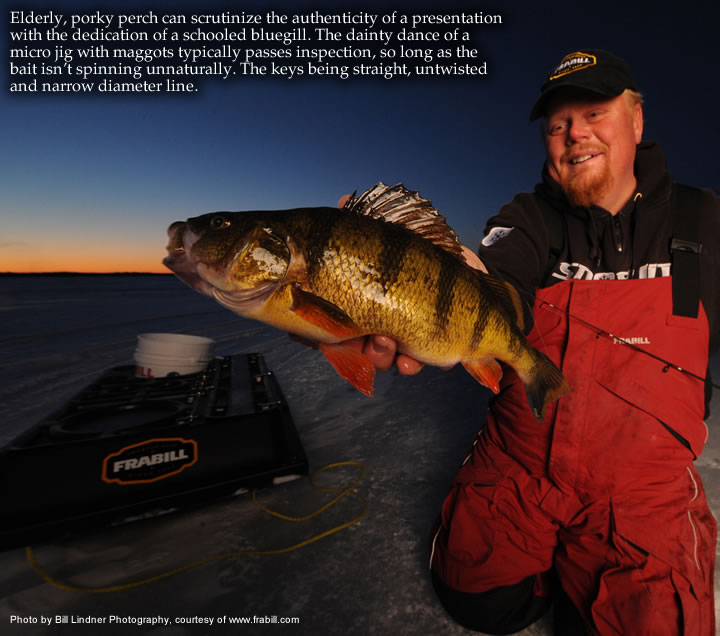 With the line tamed, the joystick is now in Bro's hands. He controls every twitch of the jig. "The micro movements are mine, or the effects of one too many mugs of morning coffee." And this boy can make a pot vanish before the rest of camp even stirs.

"The real action of the jig and jigger come to life," says Bro. "I can make the bait move, or not move. Prey will go dead still sometimes. Baitfish freeze. Zooplankton hang in suspended animation. Imitating that non-action is simply impossible with twisted line.

It's application time. For brutish bluegills, Bro's internal radar immediately scans for the deepest standing greens in the lake. There, bluegills are like croutons to a salad. Being the perfect place to live means 'gills of all shapes and sizes live amongst the foliage. If you're getting bothered by ankle-biters, mark the hole. Consider those fish the scouts. Later, especially nearer the bookends of the day, the big dogs will come through.

For said operations, Bro reaches into the pocket tackle box of candies for his fave, his namesake, the Northland Bro Bug. "Thing's surefire," says Bro. "With a bright Lady Bug pattern or more subdued Grasshopper pattern in the mix, I bust out either maggots or waxworms. Maggots are my first choice, loading the single hook up with as many as the shank will handle. Waxies go on in pairs, tail hooked."

A secondary Straight Line Combo lies in waiting, it sporting a Bloodworm from the Bro collection. "That slinky little tail flicks with the slightest movement of the rod tip. Doesn't take much. And like the Bro Bug, another horizontal bait, anti-spinning is mandatory. Sit and spin in front of a veteran bluegill and you might as well start digging around for a stick of dynamite. They won't touch a tilt-a-whirl jig."

Jig hung below the hole with care, Bro activates the micro motions, inching ever so slowly through the water column. Inch or two followed by that nervous twitching action. A bite, or more like the Dyson-ish suck of a greater 'gill, and the only indicator might be line movement incongruent with your jigging strokes. Or, the rod tip might momentarily go static. Set the hook. And in Bro-speak, it's a "sweep," not a lean-into-it hookset. Adding a Frabill Spring Bobber to the rod tip makes the system that much more sensitive, especially for anglers on the learning curve of trophy bluegill hunting.

Lakes will give up the ghost, but not to just anyone. Fish like the bull in the China shop and your future is filled with three-to-a-pound bluegills. Get with it. Get the right gear. And you can go from storyteller to ghost buster.