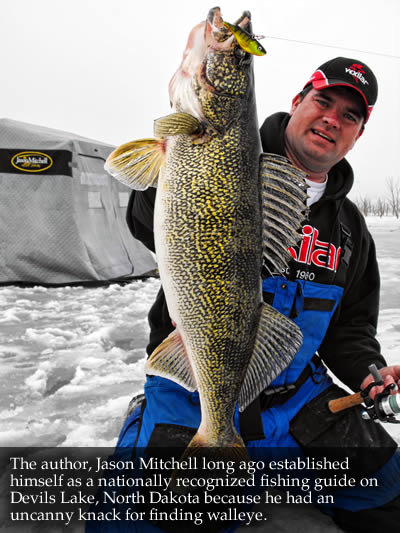 Many ice anglers associate the end of January and beginning of February with mid winter doldrums. Many anglers believe that first ice and late ice is the best ice for fishing and the in between ice… not so good. There is some truth to the midwinter doldrums particularly with smaller lakes. Now not to say a lake less than five hundred acres cannot be red hot in the middle of winter because they can but smaller water does seem more sensitive to a few factors that can ruin a bite. My own personal opinion, I believe some small lakes just get hit and as the fish get caught, the fishing gets tougher because fish bite better when they are competing against more neighbors. Remove half the fish at first ice and the remaining half are harder to catch by default. Smaller lakes can also be more subject to biological factors at times as well like oxygen levels which can slow fishing down.

Either way, when we look at big water, major ice fisheries that have some size, this is often our best bet to combat the midwinter doldrums with great fishing. I believe these larger fisheries remain solid for most of the winter because transitions and seasonal movements often keep some of those fish fresh. Why are these seasonal movements so important? Because most people fish where they heard about fish getting caught… in the past tense and as fish move, many people are slow to make the adjustments. The people however that actively look for fish, make the adjustments and find fish however are catching fish.

When we look at larger lakes, places like Devils Lake, Lake of the Woods, Leech Lake… there are all kinds of people fishing but the saving grace is that there are always fish moving and setting up on some kind of new pattern and the first people to drill in on those fish strike some pretty incredible fishing. The first guys that find the fish on the Mud for example on Mille Lacs or when walleyes pull off of some of the shoreline contours and set up on deep rock piles on Devils Lake. There are major walleye movements on many lakes for example where fish will gradually move deeper or move from a hard bottom structure to the soft mud bottom of the basin. An old general rule of thumb with walleyes was fish started out close to shore and than moved out towards the basin as the winter progressed. There are many instances however when the exact opposite happens. When we were guiding and trying to not only find fish but stay on the fish so we could guess where they would be next, we had to follow a process of elimination. Some movements are textbook and predictable while some movements made no sense until after the fact. What always made sense however was the formula, the methodology behind the decision making as to where to drill the next hole.

"An old general rule of thumb with walleyes was fish started out close to shore and than moved out towards the basin as the winter progressed. There are many instances however when the exact opposite happens..."
The first and obvious step to find fish is to check more areas just like the spot that was producing until the spot cooled off. I used to think that fishing pressure was the main factor that caused fish to leave a spot but when I was around rental houses, we often scouted for fish and moved houses on the spots. A few days later, we had people fish in the houses and there were many times when the fish were already gone even though nobody had been on the spot. Not always of course but enough to realize that even without fishing pressure, fish might only hold on a spot for a few days and be gone. So checking other similar spots is pretty self explanatory. If you were catching walleyes on a gravel bar in twenty feet of water, makes sense to check a few more gravel bars if there are any nearby. After checking a few other spots however that are similar and void of life, you now know that the time is now for the next step.

Check out and than in… often as fish reposition, anglers often assume that fish will gradually move out or deeper off the structure. The fish leave the twenty foot gravel bar and set up on the transition where the gravel turns to mud in say… thirty feet of water. If that doesn't work however, don't be afraid to look shallow, less than ten feet especially during low light regardless of time of year. I cannot count how many times we got on torrid evening walleye bites in the dead of winter in less than eight feet of water when a week earlier, we were in thirty feet. In fact on large lakes, the midwinter shallow bite might be one of the most overlooked bites on the lake.

Other traditional movements include moving off structure that is related to the shoreline and positioning over isolated structure or some type of basin transition. Often, the type of bottom is the major key to where fish will show up next. Regardless of time of year or if something feels wrong or right, force yourself to check different bottom types if something isn't working. If you have drilled in on a half dozen gravel spots, big rocks, sand and nothing… you better get over mud.

Catching walleyes right now is finding them. The angler who finds fish catches fish. The first anglers on a spot pick off the aggressive fish and the fish themselves respond differently when they are fresh and stacked up on a spot. To find walleyes, look at the big picture and focus on the process of elimination. You cannot will fish on to a spot or force them to bite but you can itemize a check list in your head and check off the unproductive locations and with each check, you are that much closer to finding fish. Use bait shop reports, shanty towns and other information to your advantage… not to where you actually fish but where to make the next move.