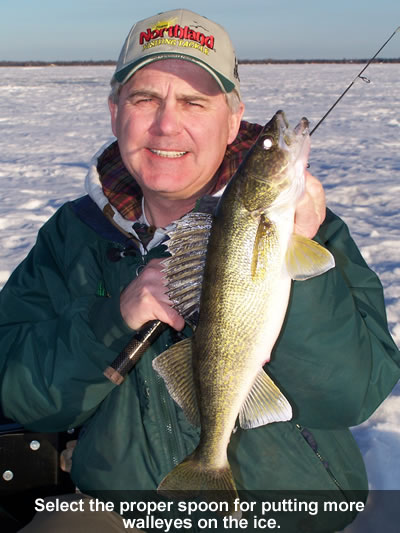 Just as there are a lot of ways to catch walleyes in open water, there are several very productive lure types for taking walleyes through the ice. But if a survey was taken among anglers who like to chase walleyes during the ice-fishing season, I'll bet a spoon would be the most popular lure. Spoons are popular because they produce. There are a lot of different spoons available to the ice angler, and each spoon has a characteristic of its own. Here are some ideas for using spoons to catch walleyes that are under the ice.

The action of the spoon is of prime consideration. Some spoons fall fast, others have more of a fluttering action as they drop to the bottom. Both have a place in our spoon arsenal. Spoons that are stamped and have a wider profile usually flutter more. Spoons that are smaller in profile but are still pretty heavy fall more straight up and down. If you have two spoons of equal weight, but one has a larger profile, the one with the larger profile will probably flutter more.

Color is also a consideration. Something more subtle and natural in appearance will often be better in clear water, while something brighter will be more productive in stained water. However, just as in open water, walleyes don't always play be the rules. Start with the color that you think should work, and if it doesn't, try something else.

Noise can be another consideration. For a long time, spoons were quiet. A few years ago the Buck-Shot Rattle Spoon was born. It has become the favorite spoon of many anglers who fish through the ice. Noise will attract walleyes in clear and stained water. Shake it or pound it on the bottom to get the walleye's attention.

Just as the spoon is an important consideration, so is the gear being used. Line is a very important consideration. A no-stretch line like Fireline enables an angler to impart a different action on a spoon than monofilament does. Since Fireline doesn't stretch, the spoon moves more when you move the rod. Monofilament stretches, so you need to move the rod more to get equal action on the bait.

No-stretch line also provides better hooksets. In water less than fifteen feet setting the hook with mono is no problem, but if you're working deeper water, you'll find that no-stretch line will often put more walleyes on the ice. If you're concerned that the more visible no-stretch line will spook fish and prevent strikes, tie a small swivel to your no-stretch line, then tie a twelve inch section of monofilament or fluorocarbon to the swivel and attach your spoon to that. Most anglers don't think that Fireline Crystal will scare fish, but you can bet the mono or fluorocarbon won't.

Much of the Midwest now has decent ice, and if the weather acts the way it usually does, that ice will just keep getting better. If you want to put some walleyes on that ice, get a spoon, attach a Gulp! Alive Minnow head to it, and get out there. Spoons catch walleyes, they also catch perch, and that is the recipe for a great time on the ice.