By Mitch Eagan - January 1, 2012
More anglers than you'd think eat bait. Not because they have to as a result of today's hard economic times, but simply because they want to.

Now I'm not talking nibbling on waxies and grated white cheddar sprinkled over a wheat wafer, but instead, gorging on a main course of succulent smelt after an evening of intentionally targeting these fanged torpedoes through the ice. It's all because smelt-the very silvery-sided forage that pack the bellies of popular predator fish like pike, walleye and trout-is a delicacy for any angler who bears taste buds. Their flesh is sweet, yet mild in flavor. (The smelt, not the fisherman.)

Snip; slit; scrape; rinse; repeat. The process for cleaning smelt is simple, too. Once you gather the right equipment and understand the finer points of icing these little fish, you'll replicate that procedure quickly 200 times while hunkered over the kitchen sink with nothing more than a pair of scissors and your thumbnail. And perhaps a kicker beverage to further enjoy the ritual.

Still not sure ice fishing for smelt is worth your time and effort? Just ask Lund walleye tournament pro Mark Brumbaugh, who nowadays departs his Arcanum, Ohio, home for days on end, and heads for the inland lakes of Michigan's Lower Peninsula just to ice these spry critters. Besides reaping a heaping platter of fried fish after only a few nighttime hours on the ice, Brumbaugh has come to realize catching smelt is more fun than he'd ever imagined. "I have a blast every time out. But to tell you the truth, it took a few trips before I learned the subtleties needed to be able to fill the bottom of a bucket with smelt; in fact, it takes more finesse to hook and land one than it does the most finicky walleyes," he admits. 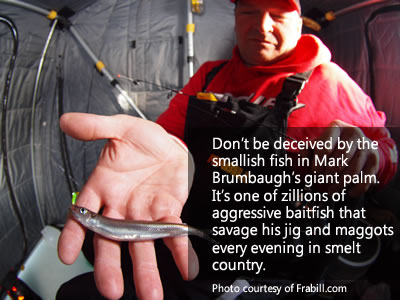 Smelt Science 101
Before getting your hook hovering under a hole, you should first understand the biology of Osmerus mordax (the rainbow smelt).

Smelt are not native to any of the freshwater inland waterways they now inhabit. They're an anadromous fish (saltwater species that lives in the sea and spawns in freshwater) in the family of salmonid, purposely placed in the Great Lakes as forage for an Atlantic salmon fishery formed at the turn of the last century. The silvery sliders were first stocked in 1906, in the Saint Mary's River in Sault Ste Marie, Michigan. But it wasn't until 1912 when smelt were found thriving from a stocking in the state's Crystal Lake, very near Lake Michigan's Port of Frankfort.

In the meantime, migrants made their way down the lake's outlet, into the Betsie River, and into Lake Michigan, where they were first reported in 1923. Soon after, smelt proliferated in a hurry, and by 1936 had journeyed into all the Great Lakes above Niagara Falls. Since then, biologists have been transplanting these fishes into deep, cold, natural lakes and reservoirs throughout the Midwest as forage for larger prey.

Filling scoop nets from the mouth of rivers and streams that dumped into the Great Lakes during the spring spawning run was the commonest way anglers harvested smelt. But as the environment of the big lakes changed and the smelt populous plummeted, anglers realized targeting them with hook and line on inland waterways fulfilled the void of fresh fish in the freezer.

Bright on, Buddy!
Although smelt have veracious appetites and feed on anything they can get their tooth-infested barracuda-like mouths around, they primarily feast on the zooplankton rising off bottom as the sun drops below the horizon; thus why anglers target smelt after dark.

By day, smelt themselves become prey and tend to hang near bottom and out of harm's way. Though they can be targeted during daylight hours, the better bite is after dark, when they climb high in water column over 30 to 60 feet of water to gobble up plankton. The best way to gather rising smelt to your hole is with an underwater light.

There are numerous lights on the market, and all work just fine. However, in localities where ice fishing for smelt hasn't caught on, submersible lights can be hard to find. Another bright idea I saw was employed by a lightless angler who took a quad-pod Frabill Shelter Light Bar and laid it over his hole so that the bright LED light shined into the drink. Both plankton and smelt rose to the occasion and hovered just under the surface where they were easy targets.

To See or Not to See (It makes a difference!)
More often than not, smelt school up and rip through pods of plankton like tuna slash through a cloud of anchovies. But at times they scatter about, swimming through an area one or two at a time. 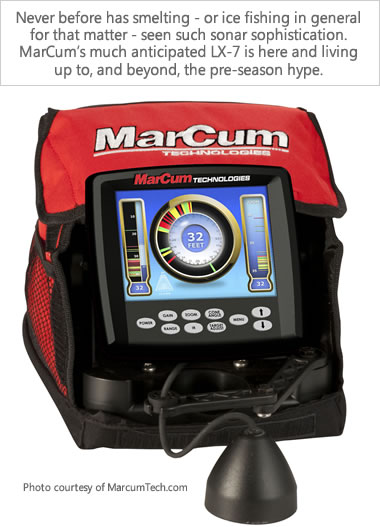 The best way to see where, exactly, these tiny fish are in the water column is with sonar. From the screen of a MarCum XL-7 I'm able to see whether or not fish are schooled up or coming through single file. And due to the unit's unrivaled sensitivity, I can put my offering right in their face.

Steady as She Goes
As you can imagine, when fish are zoned in on zooplankton, it only takes the tinniest of tidbits to tempt them. But it also takes the right rod, line, and a steady hand.

Icing smelt via a contemporary tungsten jig is the perfect ploy. These minute jigs have it all - sharp point with a narrow diameter shank; and ample weight in a small body to get it back down quickly. Tip it with a single spike and you have scent, shape, and plenty of weight all wrapped with a bow.

As for rods, it's not so much the feel as what the tip telegraphs to the eye. A Bro Series Frabill Quick Tip, for example, has the ideal action. Its tip is ultra-sensitive, and the red bead at the tip-top signals even the breath of a smelt. In fact, it you pay close attention to the tip of an ultra-light ice rod as you're trying to hold it perfectly still, you find you can see every beat of your heart pulsating through your arm, into your hand and out to the tip.

"To help hold the rod perfectly still when I'm fishing smelt, I'll lower the rod so that its midsection lies on my boot, with the tip just over the hole," says Brumbaugh. When he employs this technique, the rod quits quivering and the only movement of the tip will be from a strike.

Light line, too, is a must. But the line should be manufactured so that it stays subtle in ultra-cold temperatures, which allows it to roll off the spool without twist and kinking, Sufix Ice Magic meets those qualifications. 1- to 2-pound test is all that's needed; the ultra-thin diameter permitting the line to sink quickly so you can get right back to action.

In the End
Overall, nothing beats a platter of fresh caught fried smelt. And I mean nothing. And with the right equipment and a little finesse, you know firsthand just how amazing a meal of these so-called baitfish can be, and, just how much fun the catching is.