By Dan Small - January 1, 2012
Northern pike typically bite all winter long, but the most consistent action for the biggest pike comes almost without fail as soon as the ice will hold an angler and his gear. Why is this so? Some say it's because cooler weather and the increased vulnerability of baitfish caused by the decline of weed cover trigger a pike feeding spree. When a lake freezes during this time, the spree continues for a week or two. Sunlight penetrates through thin, clear ice, enabling sight-feeding pike to spot food more readily now than when thick ice and snow shroud a lake's surface. 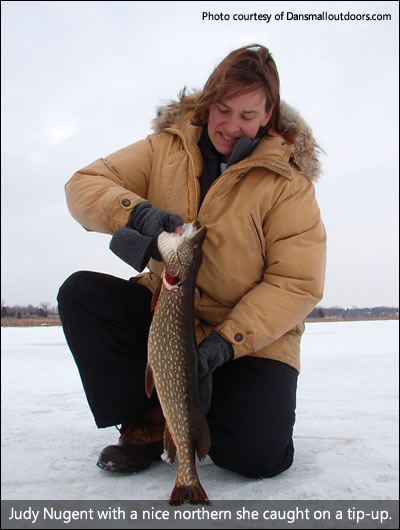 Where The Pike Are
Northerns prowl constantly, but their movements are somewhat predictable. In early winter, look for them in the same places you found them on your last open-water outings: weedbeds, inlet mouths, shallow reefs and other shallow-water structure. Later in winter, you'll look for them in deeper water along weed lines, near fish cribs, offshore bars and drop-offs, but for now, they should be shallow.

In river backwaters, reservoirs and flowages, stump fields, shallow bays and river channels hold big pike all winter long. Baitfish congregate near brush or stick-ups, and so do pike.

In shallow lakes with little structure, northerns cruise open water for food. Here, you'll do well if you set up near a group of panfishermen, as pike often prowl the periphery of panfish schools.

Pike feed most actively on sunny days. High-pressure systems slow down their activity, while a falling barometer speeds it up. Before or after a storm, you'll often catch more pike in a few hours than you'd normally see all day long.

Tackling Winter Pike
Good-quality tip-ups are standard gear. Look for some with freeze-proof bearings, a sealed, greased shaft and a reel that sits under water when the rig is set up. A cover that slides over the hole will help keep it from freezing.

Rig tip-ups with 25-pound test dacron line or one of the new high-tech braids that resist tangles. Add a 10-foot length of 12-pound test mono and a thin wire leader to prevent bite-offs.

As for hooks, go with either small trebles, large curved Swedish pike hooks, or a single long-shank No. 2.

Live minnows will draw strikes early in the season. Use whatever is available locally: golden shiners, chubs or suckers. Frozen smelt work well later in the season when pike are more lethargic.

If the ice is thin, a spud bar is all you need to cut a few holes. Thicker ice requires an auger. Taper the bottom edge outward with a spud bar to prevent line fray and help you guide a fish into the hole.

Two essentials are an ice skimmer and gaff. A northern is all teeth when it comes up through the hole, and the gaff helps control it. A jaw spreader will help you remove the hook without slashing your fingers.

Slip-on ice creepers will keep you from falling on slick ice. A portable shelter or windbreak will keep wind chill from making you miserable. Some now come attached to a sled that will hold all your gear. Tow the whole works by hand early in the season. Later, when the ice is thicker, you can use a snowmobile or ATV. If you're fishing the Madison lakes, be sure you comply with floatation rules. 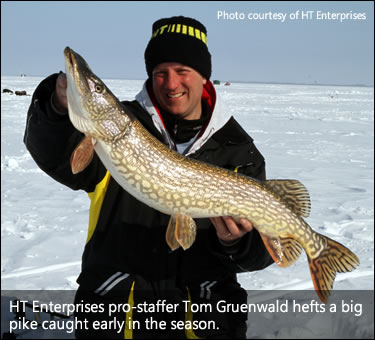 Tip-up Tactics
Set tip-ups along weed edges and in pockets within green weed beds. Hook minnows between the dorsal fin and tail so they hang downward. This keeps them off balance, forcing them to swim and thus attract pike. Pinch on a split shot or two if a minnow wants to hug the ice or if there is current.

In very shallow water, set tip-ups so your minnows swim within a foot or so of the ice. Pike will see anything above them, and the wiggling minnow will reflect sunlight off the bottom of the ice, which pike can see from a long distance.

Spread tip-ups out over as wide an area as you and your partners can watch easily. Cover a variety of depths, from three feet out to the break line. In deeper water, let your bait swim just over the weed tops.

When a flag pops, get to it quickly. Lift the tip-up out of the water, but don't put tension on the line if the pike is running. Feed out as much line as the fish wants to take. They will sometimes stop, ingest the bait, then make a second run. That's the time to set the hook. If you use small trebles or quick-set rigs, set the hook on the pike's first run.

A big pike will sometimes come to the hole calmly, then make a dash for freedom. Play a hooked fish carefully and try to ease it out of the hole when it is tired. If you plan to keep your fish, use the gaff to lift them out. If you want to release them, restrict the gaff to the lips and mouth or grab a gill plate with your hand.

"Two essentials are an ice skimmer and gaff. A northern is all teeth when it comes up through the hole, and the gaff helps control it. A jaw spreader will help you remove the hook without slashing your fingers. "
The Jigging Alternative
Some anglers set two tip-ups and use a jig rod as their third line, especially if action is slow. Rig it with the same braided line, mono and wire leader. Use a swimming lure, like a Jigging Rapala or a vertical spoon, like a Swedish Pimple.

Cover the entire water column from top to bottom. Start just under the ice and work deeper, then reverse directions and jig back to the surface.

Season northern fillets with salt, pepper and nutmeg, then broil them on both sides in lemon butter until they brown. You'll find fresh pike fillets as tasty as any fish, even walleye.

Dan Small
Dan Small is host/producer of Outdoor Wisconsin on Public Television and Outdoors Radio. He is also contributing editor of Wisconsin Outdoor News. He has written several thousand articles for national, regional and state-based outdoor publications since 1972. Listen to his syndicated weekly radio show on stations throughout Wisconsin and here on Lake-Link. For more information visit www.dansmalloutdoors.com.
TRENDING DISCUSSIONS
Advertise here