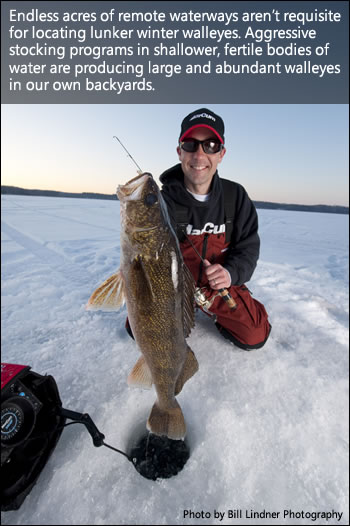 Redefining "Classic" Ice Fisheries
Some of the best walleye fishing you can imagine is occurring in places you might never think to look. Historic numbers of fish up to 10-pounds, even larger, are today living and thriving in lakes and reservoirs that only five years back were nearly empty of these coveted freshwater animals.

In the scope of the past two to three decades, given all the ups and downs that have occurred within these freshwater environs, there's a new "normal" in the realm of productive walleye fisheries. The fabulous fishing has for years remained something of a secret-until now. The secret is this: Some of the best walleye waters along the Ice Belt now lie within the cozy confines of shallow, sometimes small, often highly fertile lakes and reservoirs surrounded by prairie and farm country. The same holds true of waters in certain metropolitan areas. Rather than brimming with loads of puny yellow perch, walleyes in these waters munch on infinite schools of bullheads, small crappies, sunfish and even baby carp.

In portions of the Upper Midwest-southern Minnesota, Wisconsin, Iowa, Indiana and Illinois-renaissances in prairie walleye populations can be attributed to major increases in stocked fish, which in many lakes has coincided with copious hatches and survival of forage fish. Too, mild winters and the installation of aeration devices avert winterkills in these typically shallow fisheries. In Minnesota, where a good walleye population is often measured by the presence of 10 walleyes per survey net lift, some of these "new classic" lakes now harbor over 50 fish per net lift. That's a ton of walleyes. But the resurgence doesn't end there.

In eastern ice fisheries such as New York, Pennsylvania and New Jersey, walleyes are now stocked in places they never lived before. And according to northeastern anglers, such as New York outdoor writer Tom Schlichter, walleyes just keep on expanding in size and numbers-although many local anglers are unfamiliar with how to catch them.

To fully understand the expansion toward what has become "walleye bizarro world," consider a 2008 study of North American walleye stocking conducted by the Ontario Ministry of Natural Resources. The study revealed a striking statistic: Between 1991 and 2006, the number of North American waters stocked with walleyes has nearly doubled, going from 1,099 to 1,989 water bodies. That's a truly prodigious increase in the number of available walleye fisheries.

Consider further that a majority of them lie within the Ice Belt states and provinces. Further ponder that many of these are indeed "new" fisheries where walleyes never previously lived; or were previously overfished or unproductive waters that now teem with hungry walleyes. 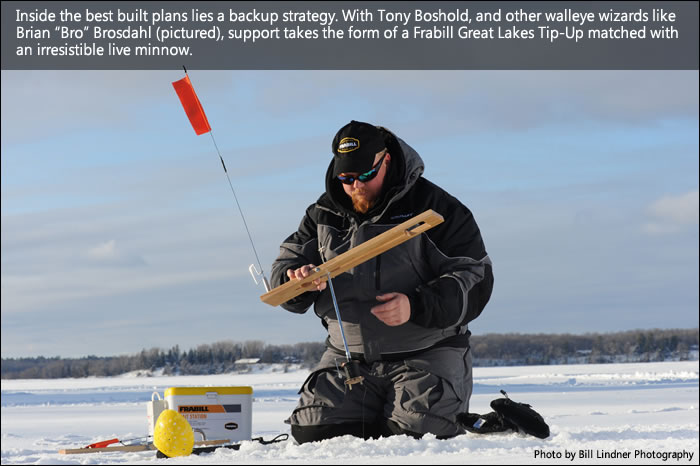 Fishing in Bizarro World
While not every hot new walleye bite is happening on a shallow, vegetation-rich lake with few perch and lots of "other fish" to serve as alternative forage, some of the best and most overlooked ones are. Often, the best way to find and catch these fish-especially early and late in winter-is to drill holes over water no deeper than 15-feet. This is the shallow littoral zone that holds a vast majority of small panfish, bullheads and other food species, such as fathead minnows. Small gizzard shad also live in some of these waters, though they'll typically filter toward the warmest, deepest and most oxygenated water available. Again, though, 'deep' is relative, and in many of these waters, might mean no more than 8-feet.

"The critical first step in locating fish in these shallow lakes," says Illinois ice fishing ace and tournament champion Tony Boshold, "is to simply select the zones where contour maps show the greatest concentrations of points, humps and other structure. Usually, unless expansive vegetation grows in the 6 to 12-foot range, I'll avoid large areas of uniform depth." The exception, says the MarCum Technologies pro-staffer, is where you find rocky shorelines, dams or dikes. Even in winter, Boshold affirms, walleyes will often travel right where the rocks meet the shoreline. "It's not at all unusual to cut holes and catch fish within casting distance of shore," he claims. "Especially in lakes where no other discernable points, vegetation, or structure exists, these shallow rocky banks can gather loads of feeding fish." 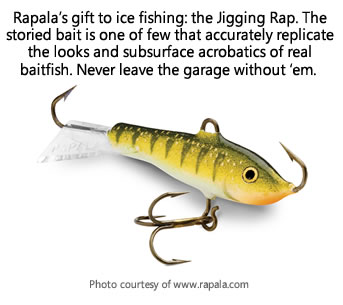 Trolling vs. Anchoring on Ice
For Boshold, the question elicits a no-brainer answer. "When I'm on ice with lots of shallow zones over which the walleyes can roam," he quips, "trolling's the only way to fly." And fly Boshold does. Thanks to a lightweight StrikeMaster auger, handsize ShowDown Troller sonar and a couple St. Croix and Frabill ice sticks, Boshold becomes a blur of ice shavings and hooksets on his favorite shallow lakes. It's not unusual for the high-energy angler to drill over 100 holes per outing, tag-teaming with a buddy to drill, check holes with his ShowDown and finally, fish back through the ones that revealed telltale marks on sonar.

Aggressive tactics rule from morning until just before the ice shavings settle at sundown. Search baits, such as a Rapala Rippin' Rap, Jigging Rap, Northland Puppet Minnow or even a large tungsten-headed jig matched with a choice softbait for action, get down fast and call fish from afar. Give the bait a few short rips, followed by a several second pause, then another quick rip. When a fish slides into view on Boshold's ShowDown or MarCum, he'll slowly raise the bait up, until that beautiful "thunk" makes the rodtip spring downward and then bend into the bulk of a hookset.

At dusk, the task of walleye discovery done, it's time to settle in for the big bite. Continue jigging aggressively with one rod, while additional deadsticks or tip-ups set with lively minnows become your soldiers- like a lively game of walleye Battleship on ice. Over your shoulder a Frabill Great Lakes Tip-Up pops, its triumphant flag, revealing the location of another feasting walleye.

If you live in farm country, the Great Plains, or even just know of a lake that's been newly stocked with walleyes, you just might have some North America's best walleye fishing right out your backdoor. Rather than travelling "up north," it might be time to stick locally or venture south.