Got a Turkey Tag Left? Try a Winter Hunt for Your Christmas Turkey

By Dan Small - December 1, 2011
It happened again this year. I managed to get through the "fall" part of our fall turkey season without killing a bird. 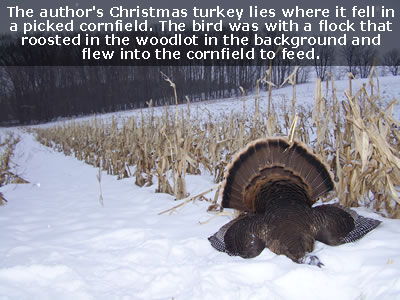 Wisconsin's fall turkey season runs through the end of December in five of the state's seven turkey-hunting zones. Most hunters probably gave up the idea of turkey hunting when the first half of the split season ended on Nov. 17, but I'm sure I'm not the only one left with an unfilled fall tag.

In zones 1-5, the season reopened on Nov. 28, but the regulations require turkey hunters to wear blaze orange as long as a firearms deer season is in progress. It's hard enough to fool a turkey when you're dressed in camouflage from head to toe. Trying to do it in an orange hat and vest is an exercise in futility. Thanks to the muzzleloader and antlerless deer seasons, that pretty much wipes out the first two weeks of the second part of the split season, leaving those of us still holding tags the coldest days of the year to try to get 'er done.

It's pretty easy to find turkeys this time of year. They gather in large flocks and spend a lot of time scratching for kernels in picked cornfields. It's not unusual to count 100 or more in a field at one time.

For the same reasons, it's not quite so easy to get close to them. With ground cover knocked down, the birds can see you coming from a long distance. They feel fairly safe in the middle of an open field because they can run or fly before you get close enough for a shot. And if one bird doesn't spot you, one of its buddies is sure to.

Phil Schweik, of Hooksetters Guide Service in Mosinee, says finding a food source is the key to bagging a bird in winter. "The best way to bag a bird now is to spend a little time watching a flock to see where they roost, how they get to a feeding area and what they do during the remaining few hours of daylight," Schweik said. "If you can set up close to the roost before dawn, or find a hiding spot between the roost and feeding field or wherever they spend the afternoon, you have a chance of getting a shot."

Now that snow blankets the state, your best camouflage option is a white suit - the kind predator hunters wear. A suit with dark lines to simulate branches will help you blend in with a snowy brush pile, hedge row or other sparse cover. Wear a white hat, gloves and facemask, too. If you want to go all out, you can put white tape on your gun and boots. Turkeys will still spot movement, but they don't seem to recognize a hunter in white as an immediate threat.

Calling is little help on a winter hunt. The birds are usually packed so closely together they show no interest in calls from a lone bird they can't see. They may answer, but will likely continue moving in the direction they are already headed, expecting the bird they heard to join them. You might have luck calling if you put out several decoys, but you'd probably need a small flock of them to make a difference, and setting them up without being spotted can be a real challenge.

Two years back, we had a lot of snow in December in southeast Wisconsin. I didn't get serious about turkey hunting until the day after Christmas. A flock was roosting in a small patch of hardwoods every night, and they came into a nearby cornfield every morning, so I dressed in white camo, put on a pair of snowshoes and sneaked along the edge of the woods before daylight. I got as close as I dared to the roost, put several decoys in the field and hunkered down on a folding stool to wait.

The birds stayed on the roost for at least an hour after sunrise then finally began dropping down into the woods. Turkeys often segregate into single-gender flocks in winter, but this flock was a mix of toms and hens. I decided to take the first bird I had a shot at, rather than wait for a tom and chance missing an opportunity altogether.

That first morning, the birds entered the cornfield about 75 yards away and angled north away from me. They ignored my decoys and did not respond to the few yelps I scratched out on a slate call. I waited until they went over a hill, then sneaked back out of there and decided to try again the next morning.

It would have required a half-mile walk over partly crusted snow to get on the north side of the hill where those birds disappeared, so the next morning, I opted for the same set up, but this time left the decoys in the truck. The turkeys flew down late, as they had the day before, walked into the field and again headed north away from me. When they disappeared over the same hill, I tried sneaking up on them, crawling commando-style for the last 100 yards on top of the crust with my shotgun cradled in my arms. 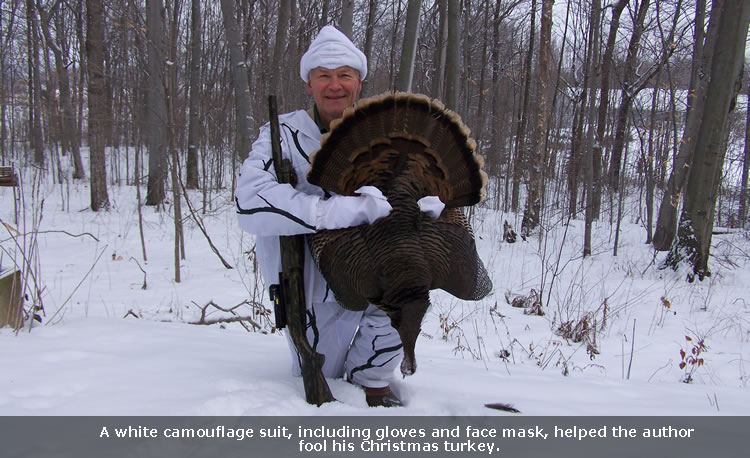 When I reached the hedgerow at the crest of the hill, several birds were still in range. They saw me, but they didn't seem to know what I was. I looked through my HoloSight, but there was no reticle! The batteries had died in the cold. I picked out the nearest bird, guessed where the red dot should be and fired. The entire flock, including the bird I had shot at, flew. I looked for blood or feathers and found none - I had apparently shot over the bird's head!

I left the flock alone for several days, then went out again on Dec. 31 and set up closer to the roost than I had the last time. I had fresh batteries in my sight and left it turned off until the birds flew down. As before, the birds dropped into the woods an hour after sunrise, then marched single-file into the field and began scratching for corn.

The flock spread out, but once again drifted slowly toward the north. One hen lagged behind the rest, but she was still farther away than I wanted to shoot. In a now-or-never situation, I aimed a little over her head and touched off a round. She went down, and the rest of the flock trotted over the hill.

This year, I have two fall tags left. That flock is still roosting in the same woodlot, but this year I'll try to sneak in from the north side, since that's where they go every morning. I hope to have one bird in the bag by the time you read this. If the flock is mixed again, this winter I might wait for a tom, or at least a jake, to fill that second tag.

A winter hunt is a lot of work, but when the payoff is a turkey for Christmas, it's well worth the effort.