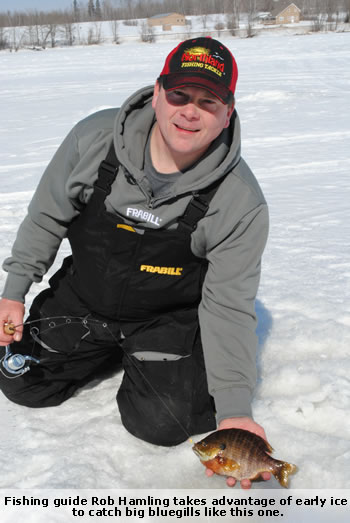 Ice-fishing is getting closer every day. For the past few days there's been a skim of ice on the pond early in the morning, but that skim has disappeared by mid-morning. Today the skim lasted until the middle of the afternoon. Once that layer of ice has a full day and night to get established, it won't be long until there will be anglers out there punching holes in the ice. I won't be the first person out there drilling holes: I wait until I see someone bigger than me out there, and, unfortunately, sometimes it's hard to find someone bigger than me. Nonetheless, when I'm convinced that the ice is thick enough, it's time to go ice-fishing.

The ice gets firm on smaller ponds and lakes first, and those bodies of water are typically home to panfish. Therefore, panfish will often be the targets on our first venture of the year onto the ice. There are a few things to keep in mind when getting after early season panfish. Following are some of those things.

On early ice, safety is the first consideration, being quiet is right behind. If you're making a bunch of noise or moving around a lot, you're chances for success are lessened. Get on the ice and to the area that you want to fish early, pop a few holes, then sit down and wait for the fish to come to you. Later in the season when the ice is thicker and there's some snow cover you can move around more, but now is a time to be quiet.

Although the weather is probably still fairly warm, it usually works best to fish from a shelter. Remember, if a fish is going to bite your bait, that fish must be directly below your hole. That means it could be just a few feet from you. If the fish sees you move, it's going to spook. Fishing from a shelter will hide your movements. The fish can see the shelter, but the shelter is motionless. You're in that shelter, so your movements can't be seen. The fish can still hear you if you make noise, but they won't see you. Frabill's Commando shelter is perfect for early ice. It's lightweight, but has plenty of room for your gear. It's very comfortable to fish from.

Small baits are usually most productive for panfish. Take a look at a bluegill's mouth: It's tiny. They like little meals. Crappies have a bigger mouth, but they still eat tiny baits. There's a new tiny bait out this year from Northland Fishing Tackle. It's called a Hard Rock Mooska Jig, and it is tiny. It's made from tungsten, which is heavy stuff. Just a little piece of tungsten allows this bait to sink quickly, but its profile is miniscule. Tip it with a Gulp! Maggot and fish it on two or three pound test Trilene Cold Weather line. "Gills and perch and crappies will eat it up.

Remember to keep your bait above the fish. They see up better than they see down. They'll move up for a bait, but will rarely go down for a bait.

Be safe and be quiet on early ice and you can get in on some pretty darn good action. It's coming soon to a lake or pond near you: Be ready.