Why "Live" Beats "Dead" on Ice

The rodtip of the deadstick springs suddenly and energetically to life. 'Dead'stick? It seems at once a confusing mix of metaphors for a tactic so reliant on the vigor and vitality of a wild baitfish. Below the ice, dormant or just plain dead minnows take pike, maybe the occasional wintertime catfish. But hang a limp, lifeless shiner or chub before the gaping maws of a hefty walleye, and you might just as well present a wet sock on a hook.

Deadstick set in a holder, a bouncing rodtip acts like a beacon, simultaneously prodding the bait to continue its underwater dance, while also pinging the lateral lines of those predators driven by flag-white tails. That anglers refer to this seemingly passive activity as "deadsticking" seems a rather curious irony-even within the sometimes-illogical sport of ice fishing.

Professional angler James Holst knows all about the occasional illogic of hunting walleyes through a hole in the ice. He has done hard time both in front of and behind a camera lens, in weather and conditions that often defy logic itself. During a recent filming trip to an anonymous Northcountry lake, however, Holst employed a MarCum vs825sd underwater camera to capture remarkable under-ice footage of numerous giant walleyes as they investigated live minnows fished on deadsticks in just 6-feet of gin-clear water.

During several days of fishing and filming, Holst witnessed dozens of 6- to 10-pound walleyes both eat and ignore his offerings, icing an impressive number of these titanic predators in the process. The salient water clarity and shallow depth in Holst's lake provided a rarely seen glimpse into the underwater feeding habits of these frequently puzzling fish. "We like to think of walleyes as fairly easygoing animals that feed with the utmost care and finesse," said Holst, in reference to his underwater footage. "But these shallow water fish were just as active and predatory as bass or pike." Holst's footage, which has aired on In-Depth Outdoors TV (idofishing.com), reveals walleyes zipping in and out of frame, clearly in hunt-mode. 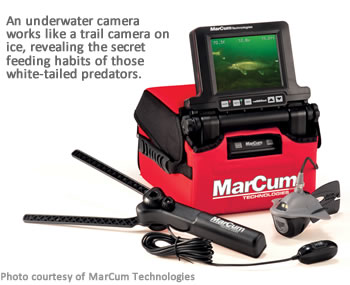 "Most amazing," Holst continued, "Was the total contrast in walleye behavior, relative to the activity level of the minnows on our hooks. I think most anglers would be surprised by how often their minnows aren't swimming in ways that attract fish. Every time our baits failed to show signs of life-neither kicking their tails nor attempting to flee-walleyes coasted on by without even giving the little morsels a look. I think they literally viewed the hook and motionless minnow as an inedible, inanimate object. On the other hand, when we had an active minnow down there, fish reaction was usually very aggressive. Even though these walleyes were actively hunting food, they absolutely would not consider biting unless our baits were lively and kicking. Whenever a minnow thrashed its body, these big walleyes lost all inhibition and became deadly hunters."

Holst continued: "No question that these fish were mostly honing in on the vibration of pulsing baitfish, rather than visually inspecting their movements. We filmed several live strikes that show walleyes facing completely opposite the minnow-no way they could see the bait with their eyes; yet as soon as the baitfish give a little kick, the walleye would blindly turn on a dime and engulf its meal. Clearly, the pulsing vibrations of active baitfish were inducing hair-trigger responses from these trophy walleyes; these 'blind strikes' really drove the point home. It's hard to appreciate the drawing power of healthy, lively bait until you see the difference on the screen of one of these MarCum cameras."

Beyond the mental impressions left by his underwater footage, Holst also prefers deadstick rods that react to the swimming "impressions" of lively baitfish. By necessity, a quality deadstick rod, such as Holst's Thorne Bro's Original 36-inch Deadstick, as well as a Frabill medium-action 38-inch Ice Hunter or St. Croix 36-inch light Premier, should react to and work with the baitfish it presents. The key to each of these superior sticks lies in its tip section, and then the rod-blank section as it transitions into the spine (lower 2/3 of the blank).

The right rod tip performs three functions. One, it softly flexes when a walleye bites, minimizing resistance felt by the fish. Next, it serves as a sensitive bite-indicator, arcing slowly downward, as a walleye's weight bears on the rod. Finally, the tip needs to work in concert with the baitfish, alternately bending as the minnow swims away and then gently lifting upward against the bait, prodding it to continue its seductive swim. Lacking an actively jigging angler, the stationary rodtip works as a sort of automatic puppeteer, using its flex to work both with and against the minnow's movements. 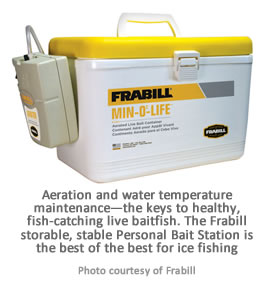 The first order of business is securing a cache of premium baitfish. Three-and-one-half to 6-inch golden shiners, creek chubs, and even bullheads prove highly appetizing to big walleyes, and swim with greater vigor than most other species. It's essential that to maximize baitfish health and energy, you store them in a container that maintains a constant cool temperature. Only Frabill insulated bait stations both maintain a constant water temperature while also properly aerating the water. (Insufficient aeration drastically saps baitfish energy.) Water that's too cold (near freezing) is also counterproductive to most bait species. For small baits, use a Frabill Min-O2-Life Personal Bait Station, while for larger specimens, an Aqua-Life Bait Station excels.

Armed with quality bait and the proper rod and presentation scheme, you need only position your minnow to maximize bites. Rigged on a #2 to 1/0 VMC bait hook, minnows struggle and wander in wide arcs. These actions certainly trigger bites, though extra lively minnows can also prove too fast for lazier walleyes to catch. Plain-hooked minnows swim best with the hook slipped cleanly through both nostrils. Meanwhile, a 1/16- or 1/8-ounce jighead with a wide-gap hook holds a minnow in check, while also prodding them to kick their tails actively in place; this is often a monumentally enticing maneuver for big fish. Hook baits lightly, parallel to their back, jig hookpoint piercing skin just in front of the dorsal fin.

Employ a quality rod holder and perhaps even add what's become known as an ice fishing "trail camera." Holst rigs his MarCum with an Auto Camera Panner that allows him to pan the lens and monitor multiple lines. "You don't often get to do this kind of sight-fishing for big walleyes," says Holst. "But it proves once and for all the power of lively, active bait."