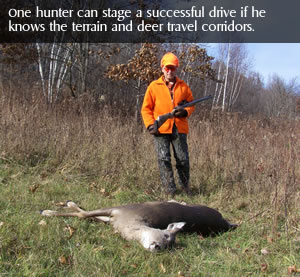 If you hunt deer with a group of friends, you are likely familiar with deer drives. Well-run drives can put a lot of venison on the meat pole. To make a drive work, standers must guard escape routes with clear and safe shooting lanes, while drivers move in concert through cover to push out deer.

Do it right, and someone will usually get a shot at any deer in the cover you are hunting. Trouble is, there are too many ways to mess up a drive.

If you don't have enough standers, deer can escape between them. Not enough drivers, and deer can circle back between them. If drivers get out of sync, deer can slip out to the side. And there's always the safety issue of hunters pointing guns toward each other.

I prefer hunting alone or with a single partner who knows the game plan and sticks to it. Two hunters, working together, can often pull off a tag-team drive that moves deer past one or both of them.

A drive, whether done with two hunters or 20, is generally used to move deer out of bedding cover. Drives work best during midday and during the gun season, when deer are typically less active than during the rut. Some archers use drives (The late Art LaHa orchestrated bowhunt drives with busloads of hunters and killed a lot of deer.), but it's a low-percentage way to bowhunt.

A good drive doesn't stampede deer, it gets them up and walking, not running. You want them to bumble past the waiting hunter while they are trying to sneak out of the way of the moving hunter.

You don't need to shout, bang pots together or whack trees with hardwood poles as you march through the woods. The deer know you are there, and they will either sit tight or get up and move out of your way. If you spook them too badly, they may be galloping, not walking. A running deer is hard to kill cleanly, and shooting at running deer can put fellow hunters at risk.

Basic Two-Man Drive
The simplest two-man drive is probably the most effective, but it takes the right kind of cover to work: open farm country, small woodlots, pockets of dense brush and other small or narrow strips of cover that are big enough to hide a deer, yet small enough for one hunter to get them moving.

It helps to scout such covers well in advance of the season, so you know where deer bed and what escape routes they use. If you hunt the same covers year after year, you'll learn what the deer usually do. Years ago, I watched several hunters push a small patch of brush. Two hunters walked slowly through the cover from the north, while two others waited on the south side. A third stander tucked himself into the edge of the woods across a dirt road to the west and stayed until the drive was finished. After the drivers had left the brush, a decent buck sneaked out of there along a small creek and crossed the road to the waiting hunter. He told me he had killed several bucks in that spot over the years.

The standing hunter must sneak into position downwind of the anticipated escape route as quietly as possible and then remain silent and motionless. This works best on the ground. In most small patches of cover, you'll give yourself away climbing into a tree stand.

In a narrow strip of cover, like a brushy fencerow or creek bottom, the driver should walk slowly and silently through it, zig-zagging if it is too wide to see every part of it.

In small, but wider patches, either walk through the middle, circle the outside or criss-cross through the center from two different angles.

A buck may sit tight in a small patch of cover, hoping the driver will walk past him. A walk/stop, walk/stop approach might get him moving, or the driver might see him in his bed and shoot him there. The stander usually gets a shot as a deer tries to sneak out.

The Still-Hunt Drive
Two hunters can still-hunt through a larger woods or dense bedding cover and sometimes move deer toward each other. Start at the downwind side of the cover and stay far enough apart so you can just see each other's orange flashes as you walk. One hunter still-hunts s-l-o-w-l-y upwind for a hundred yards or so, then stops and waits. Then the other hunter does the same, passing the waiting hunter and stopping 100 yards or so upwind of him. Deer often circle back to see or smell what disturbed them, so one hunter may move a deer toward the other.

If the hunters keep each other just barely in sight, each will know if it is safe to shoot.

If you add a third or fourth hunter to the mix, place him in a safe location as a stander at the end of the drive. 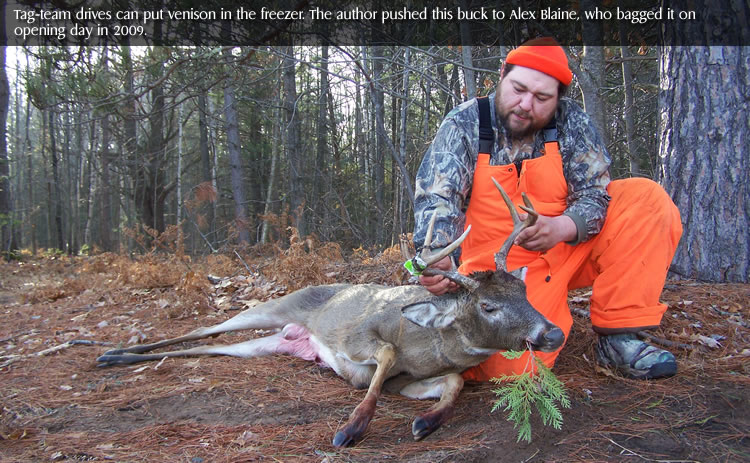 Charlie's Cloverleaf Drive
In his book, Whitetail Strategies, Charles Alsheimer describes a variation of the still-hunt drive he calls the "cloverleaf still-hunt." One hunter climbs into a tree stand in the middle of a prime bedding area (This may be the toughest part to pull off.), while a second hunter makes a big loop away from the stand hunter and comes back to him. When the still-hunter returns almost to the stand, he makes another loop, continuing the process until he has gone a full 360º around the stand. A bedded buck may get up to avoid the moving hunter and walk right past the stander.

"Over the years, I've killed several bucks using this technique," Alsheimer writes. "I've found it to be a real ace-in-the-hole when post-rut hunting gets tough."

My son Jon and I have tag-teamed to kill several bucks during the gun season. We've even done it while both of us were in tree stands a couple hundred yards apart. Once, Jon turned to look to his right and spooked a buck and a doe I had earlier seen walking toward him. I shot the buck as they trotted past my stand. Tag-team hunting not only works, it's a good way to assure you have help when it's time to drag out your deer.