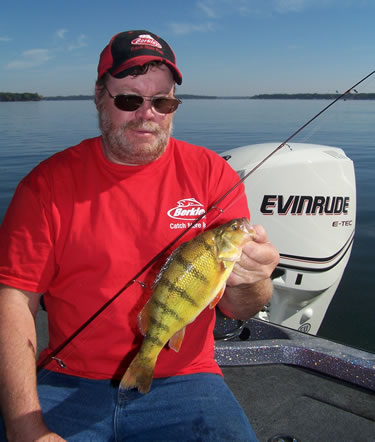 There are a couple of reasons ice-fishing baits work so well this time of year in open water. First, it's a conditioning thing. Fish become conditioned to lures. Once they see a bait a few times, they can become reluctant to bite that bait. Over a spring and summer time period, fish like walleyes and perch see lots of jigs and spinners and crankbaits. On the other hand, it's been several months since they've seen an ice-fishing bait. Drop a jig on a walleye's nose and it might be ignored. Drop an ice-fishing bait down there and the chances are better that it will be bit.

Another reason ice-fishing baits are so productive right now is their design. Ice baits are meant to be fished vertically, straight up and down. Crankbaits and spinners have to be moved horizontally to be productive. From now until freeze-up, in many bodies of water, walleyes, perch, and crappies will school in deep water, and they won't want to chase a bait. A vertical presentation will be very productive. You keep an eye on your depth-finder and when you get over a school of fish, you hover directly overhead and drop your bait into the school and leave it there, wiggling right in their face. You will get bit...usually.

On a recent fishing trip the above is exactly what we did. We located the fish with the sonar, hovered directly overhead, dropped ice baits on them, and caught'em. Caught'em good! Walleyes and perch. Not real big walleyes, but nice ones.

Perhaps the best ice bait for open water fishing is a Northland Puppet Minnow. This bait was designed to be fished straight up and down. You let it sink to the bottom, then you lift it. A small "wing" at the back of the bait makes the Puppet Minnow fall back to the bottom in semi-circles. When your line goes slack, the bait has hit the bottom or a fish has it. Sometimes a gentle lift is best, sometimes a ripping lift will trigger the fish. If walleyes are the target, go with a larger bait: When perch are the quarry, downsize a bit. Attach the Puppet Minnow to your line with a small snap/swivel to prevent line twist. Add a Gulp! Alive Minnow Head for scent and additional visual appeal.

Puppet Minnows have a single hook at each end of the bait and a treble belly hook. That's a lot of hooks. I like to net any fish that's medium size and up when they're hooked on this bait to reduce the chances of getting a hook in my hand. The Frabill Conservation Series of nets have a bag that will reduce hook tangles in the net, and also reduce the possibility of a hook in the hand.

If you're going to be fishing open water in the next few weeks, give ice-fishing baits a try. You'll catch some fish, and it will also serve as a good warm-up for the ice-fishing season.