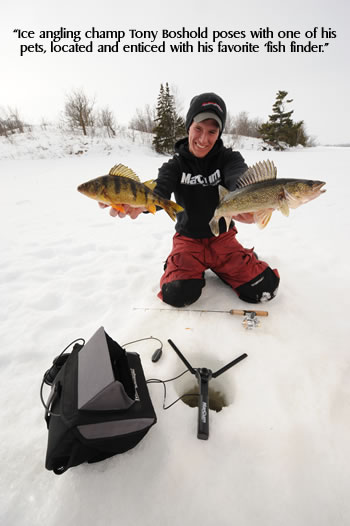 Ice fishing ace Tony Boshold sees the big picture. Give the world champion angler an auger and an underwater camera in the morning, and later that day, he'll have discovered the lion's-share of a lake's secrets. Many of the top anglers fishing the competitive ice fishing circuit these days utilize a MarCum camera-including reigning NAIFC Team-of-the-Year Champs Jacek Gawlinski and Zibi Wojcik. Yet fewer anglers than you'd think emulate Boshold and the Polish tandem - disappearing into the horizon, dipping the camera lens beneath an unending string of predrilled ice holes. That's gradually changing, however, as underwater cameras earn the status of 'standard equipment.'

"There's only one way to discover and really learn the best spots in a lake," says Boshold. "Fishing each hole takes time, but the camera gives me an instant thumbs-up or down. If fish are there, there's no hiding from the lens-I see 'em right now. And the other key is that MarCum's high-resolution color LCD shows me fish and cover in detail you can't get with other systems. Makes a huge difference. Lots of people think the camera is a great fish-catching tool- and it is-but it might be the best fish-finding tool on ice."

Cameras as Fish-Finders
"I especially love it when I'm on a lake with huge 5 to 20 foot flats; I know it's only a matter of time before I'll find a mass herd of bluegills, crappies or perch. Might seem like a needle-in-a-haystack to some fishermen. But to me, it's inevitable-the camera is eventually going to find a school of fish no one else is targeting. That alone is worth the price of admission."

For Boshold, the willingness to power-drill and then check each hole with his underwater camera is simply the best way to find tournament-winning pods of fish. Even when he's set up on a certain spot, Boshold continues using his favorite 'fish finder.'

"I use the Auto Camera Panning accessory that comes with my MarCum to suspend the lens at any depth, using the remote control to search the terrain all around my position. I'm scanning for the biggest expanses of lively vegetation, as well as fish in the distance. The directional arrow on the screen also lets me track fish schools, as they move across the weeds.

"Look for a mixture of vegetation, rather than just, say, all coontail, spread across an entire flat. From there, we look for those little open trenches or circles of sand between the veg. Another spot that has produced tournament winning 'gills is a little 2-foot rise in the weedflat. Might only be the size of a pickup truck, but it can hold mega fish. Same thing with dips, where bottom drops a few feet. Major ''gillage.' 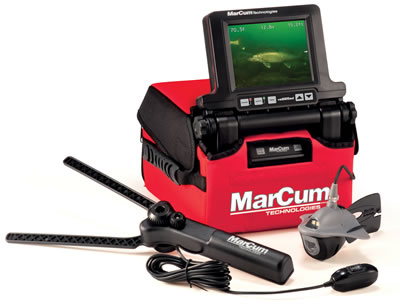 Cameras as Fish-Catchers
As Boshold will tell you, locating fish under the ice remains the most important hurdle in the pursuit. There are plenty of times when panfish and other species feed with all the enthusiasm of a turtle. Good luck detecting subtle nips and ticks with even an expertly honed sense of feel. If Boshold needs another layer of bite-detection, there's a good chance you do as well.

"On a tough bite, you can get nipped dozens of times without feeling a thing," he reveals. "Until you've watched selective bluegills or perch inhale, mouth, or delicately nip at your lure on the screen, you won't detect or hook nearly as many fish as you could. The first time you see it, but don't feel it on your line, you can hardly believe the number of fish you've been missing. Panfish are used to eating tiny things that are weightless in water; they can feed with a bare minimum of effort."

Along these lines, one of Boshold's all-time sweetest lure tricks is something he calls the "bump-and-flutter." He starts with a small, yet weighty tungsten jig, such as a 4mm Fiskas Wolfram or Northland Hard-Rock Mooska Jig dressed with a Little Atom Jumbo Nuggie. A foot above the jig, he ties in an 8-inch dropper line and a #10 to #16 nymph, such as a gold-ribbed Hare's Ear or midge imitation.

"The tungsten jig shoots to the bottom fast, while the little fly flutters slowly behind. It's absolutely weightless in water, so fish can easily breathe it into their mouths. Finicky panfish absolutely devour the fly. Yet even then, the strike itself isn't often felt on your line. But the camera screen shows all. You'll catch every fish that bites, while anglers around you fishing without a camera will swear there isn't a fish to be caught.

And that's just fine with me," he says with a wink.