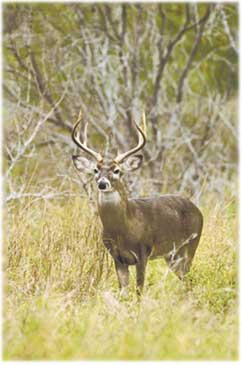 This time of year, it is easy to think about nothing but fishing. But with hunting not too far off, some thought should be given to scouting. Scouting plays perhaps the most critical role in your deer hunt. A few hours spent in the field before the season can make all the difference when the season starts. There are 3 types of scouting: pre-season, during season and after season. Now is the time to start your pre-season scouting, the most important of the 3. Scouting the whole year can provide a wealth of information, but pre-season scouting will be the most effective. During the summer, most bucks and does live and feed in the same areas they will inhabit when hunting starts. Crop rotation and placement have a major impact on deer habits, and by late summer, the crop pattern is well established. Summer deer are not too cautious because they haven't been hunted for months, so they can generally be seen at all times of the day.

Normal Range
All Whitetails have a normal range, which varies from 100 to 4,000 acres. Does have a smaller range size than bucks. A deer's range includes all the basics of survival: food, water and cover.

Food
A working knowledge of deer foods and feeding patterns is important to a hunter's success. Whitetails like to feed close to their bedding areas. In the fall, they may bed within a couple hundred yards of a food source such as soybeans, corn, alfalfa, clover, apple trees or acorns. There are a large variety of oak trees that have acorns, so look for the white oaks as indicated by rounded tips rather than the more typical pointed ones. Often, their trails will naturally lead to and from these food sources. Food sources change constantly throughout the year. Deer travel routes and bedding areas change with food sources. Constant scouting is critical to success. As the acorns begin to fall, deer will concentrate on filling up on the high protein nuts and will continue until the source is gone. Also in early fall, deer will fill up on green vegetation. Green plants grow all over the fields and woods, so finding specific feeding or bedding areas could be difficult.

Bedding Areas
Whitetails choose beds primarily for concealment. They lie in the thick grass or brush, beneath deadfalls or by mounds. Bucks like to be up high where they can see a predator approaching. During rut, bucks bed where they can watch does. Deer use several bedding areas within their home range. This prevents predators from zeroing in on them. Bucks have been known to bed in a small grass patch or thicket in the middle of a field or even by the road. Deer don't sleep for long periods of time but rather doze on and off, always aware of their surroundings. It's tough hunting deer around the bedding areas because of their high state of awareness. You're better off hunting a trail leading to or from a bedding area.

Water
Deer will always have a source of water within a short distance of their bedding areas. It could be a lake, river, pond or a bog - anything that has water. Rutting deer get thirsty from the day's activities, so having a stand by a watering hole could pay off.

Trails
Deer, especially does and fawns, follow the same trails to feed and to bedding areas. Bucks, on the other hand, will use less traveled routes. A well-worn trail might score you a buck, but chances are the big boys won't be using them. Be careful not to walk on or close to trails. If the deer pick up any human scent, they will change their routes. Bucks like to walk in straight lines while does and fawns tend to meander.

Droppings
The droppings can vary based on diet. A deer feeding on apples or some other form of soft food will drop dark, moist, clumped pellets. When their diets shift to acorns, the droppings will be dry and lighter in color. By examining their droppings, you can tell what their diets are. This will help you in focusing on feeding areas. The bigger the pellet size, the larger the deer. A mixture of large and small droppings could indicate a doe with her fawns. A single pile of large droppings usually indicates a buck.

Tracks
This is the most difficult way of determining what is in the area. I have harvested large does that have the hoof out track, as thought by many to be a buck's signature. A large track could be a large doe or a buck. Going back to what I had mentioned earlier, if there are small tracks mixed with large tracks, then it is probably a doe with fawns. An old buck could have a 5-inch track. In light snow, a buck will tend to leave drag marks.

Scrapes
A buck will create a scrape when he is starting the mating cycle to let does know he is available and to mark his territory. They start showing up a couple of weeks before the peak of rut, usually in early October. Scrapes are found along wood lines, fence rows, edges of fields, old-logging roads and along trails. Most of the bucks tend their scrapes at night, so dawn and dusk are the best time to watch them. The late rut period is the best time to hunt scrapes because mature bucks are dressing up scrapes hoping for one last fling.

Licks
Licks go hand-in-hand with scrapes. Bucks lick and rub their foreheads on branches and twigs above their scrapes to leave scent and to mark their territories.

Rubs
Bucks start rubbing around bedding and feeding areas in September. Usually, the bigger the rub and the higher up a tree it is indicates the size of deer. One buck can tear up a lot of trees. They tend to stay in the area but may only rub a tree once.

Cameras
I have often wondered exactly what is on the trails I have been tracking. As I mentioned earlier, a large doe can have a track just like a big buck. I have set up stands on a trail based on track size only to find does and smaller bucks. With all of the trail cameras available, I decided to try a few. There are two types of systems available. String or infrared triggering. I can't see the string system being very reliable, so I focused on the infrared systems of which there are 2, active and passive monitoring.

Active monitoring is used when a specific type of animal is to be monitored. Only animals passing between the transmitter and receiver, which when monitoring deer would be set at 30 inches, can break the beam. The animal must also break the beam for a specific period of time or the event will not be recorded. The time period is adjustable on most active infrared units.

Passive infrared monitoring systems are designed to detect the presence of both heat and motion. Both must be present at the same time for the event to be recorded. Passive systems monitor an area. Almost any animal activity in the area will trigger the system.

Gametronix has the Game Scout trail camera system that out performed the 2 other systems I tried. You need a camera that is quiet, waterproof and has auto wind. Also, concealment plays an important part because of the effective photo range. With some systems having an effective photo range of 20 feet you would need to set the camera right on the trail, which makes it easy for someone to steal and it could also alert an animal. Some manufacturers use inexpensive cameras, which when recording an event would spook an animal. The Game Scout system has all of the necessary options and an effective range of up to 60 feet so it can be set up a ways off of the trail, not disturbing the surroundings. Now is the time to get out in the woods and start learning the animal's habits and feeding patterns. Once you're comfortable with the area you want to hunt, get your stand up. The longer you have it in place, the more the deer will get use to it before the season starts. Take your time and be careful not to disturb the areas you're scouting. This can have a big impact on the upcoming hunt.