The Essentials for Wintertime Crappies

By Paul Nelson - November 1, 2011
The best time to search for winter crappie spots is in the fall, when anglers can capitalize on the mobility of a boat and onboard sonar to cruise around marking spots mentally, preferably with GPS, too. Once the lakes freeze, though, assuming you didn't conduct autumn reconnaissance, your tools are a lake map, GPS map chip to select probable areas, and then a whole lot of exploratory hole drilling.

Crappies in most lakes will already be near their winter locations by the time surface temperatures reach the low 50s, so there is a window of opportunity every year to do some homework in a boat before the upcoming ice fishing season.

Every lake has a unique personality, but there are enough similarities between lakes for anglers to make educated guesses to where the crappies are likely to be schooled. Crappies and other fish species must adapt to whatever habitat and food choices are available to them. If it's not there, they can't use it - pretty straightforward stuff. 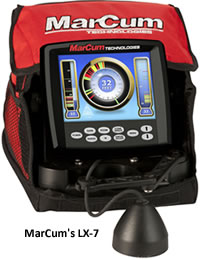 Identifying lakes with the greatest potential is job one. Lakes with plenty of deepwater, with one or more mud basin areas are premium, the crappies likely feeding on zooplankton along with a various baitfish species. Crappies in shallower lakes usually consume a higher proportion of minnows and insects with less zooplankton. Large lakes often feature shallow bays that act like independent bodies of water. So it's possible to have both 'deep' and 'shallow' bites occurring at the same time, on the same lake.

Anglers using premium sonar like MarCum's new and highly anticipated LX-7 will recognize the colored layer of "stuff" that lifts off the bottom as night approaches and settles back to the bottom in the morning. Fish the band. Crappies feed there.

The "stuff" is actually zooplankton, which crappies vacuum up when the micro-foodstuffs are concentrated in layers above the bottom. Crappies feeding on zooplankton will have black mush in their stomachs once opened on the fillet table. What you're seeing is digested zooplankton.

Crappies in both deep and shallow lakes like 'isolated open water,' meaning, they want to be close to some structure while resting and relatively stationary, and then move straight to the structure and cover to feed.

Crappies in lakes with featureless basins tend to wander more, behaving similarly on lakes with steep breaks around the edges of large basins or lakes with basin areas between structures that frame the deep water. 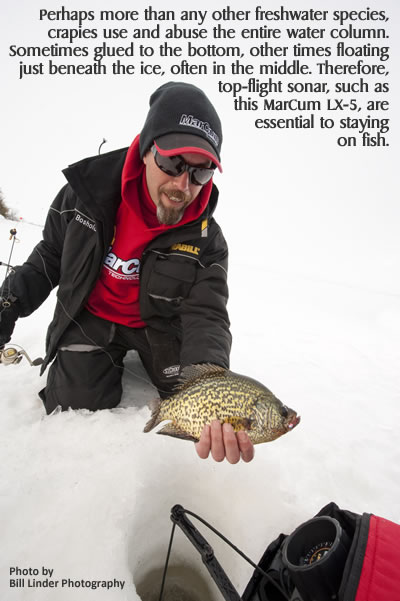 Crappies make runs when they're in feeding mode. Anglers have the best odds of getting hooked up on lakes with predictable holding areas when the crappies are on the move. Anglers may have to use trial and error and make multiple moves to first find these feeding paths, though.

By and large, crappies prefer small presentations during the cold water months, but their mouths are soft and tear easy, so you need to use hooks with 'bite' lose fish. Most small lures have small hooks, so I like to open the bend on the hook to make it wider and get a deeper set.

Northland Fishing Tackle has added the Hard Rock Mooska Jigs to their line. The micro-lures are heavy for their size, which is on account of the tungsten not lead composition. Tungsten lures can be tiny and still heavy enough to get deep in a hurry. Also, the jigs feature a sharp, wide-gapped, upturned hook right out of the package.

Small minnows are proven offerings for wintertime crappies, most effective at dawn and dusk; in the presence of large crappies (and bonus walleyes); and early and late in the ice fishing season. During the midwinter period they react more positively to live maggots and waxworms, or some of the new highly-detailed soft plastics, such as the Bro Bloodworm from Northland.

Anglers should match their handpicked presentations with light line and a sensitive rod to be able to detect the slightest nips in deep and shallow water alike. I like use the 27-inch Quick-Tip "Bro Series" combo made by Frabill and match it with 3-lb. test clear monofilament. Another surefire ice stick from Frabill is the new Straight Line Combo. It offers Bro Series rod quality with a fly-fishing styled reel. The wisdom behind the design is to let line flow smoother, and without kinks and coils. And it works. Those of you who line-watch, the 'tightliners,' will really appreciate its performance. The Straight Line Combos come in three lengths and actions.

Wintertime crappie fishing is about sticking to the basics. These core concepts account for the majority of my catches every winter. Prepare for some flexibility on the fly, but the 'KISS' program is spot-on with crappies. Search the acronym 'KISS' - and not the makeup wearing glam band - and you'll know what I mean.

Paul Nelson
Outdoor Writer Paul Nelson is a veteran guide who specializes fishing waters along Minnesota's famous Highway 2. Nelson can be reached at Bemidji Area Lakes Guide Service, [email protected], 218-759-2235.
TRENDING DISCUSSIONS
Advertise here
Advertise here
Please take a moment to visit our sponsors. Without them we would not be here.