By Jason Mitchell - November 1, 2011
We do much of our filming on late ice. We take a lot of our photos at late ice as well. The reason is simple, long relatively nice days on the ice where you can expect sweatshirt weather. When the sun begins to rot the ice, you can expect to get some work done if you are in the business filming television shows as you typically get good fishing and weather that doesn't freeze fingertips and camera batteries. Like many of you however, I need to get on the ice long before late ice and in all reality, first ice is just as prime of an opportunity to catch fish but the conditions might not be so romantic. 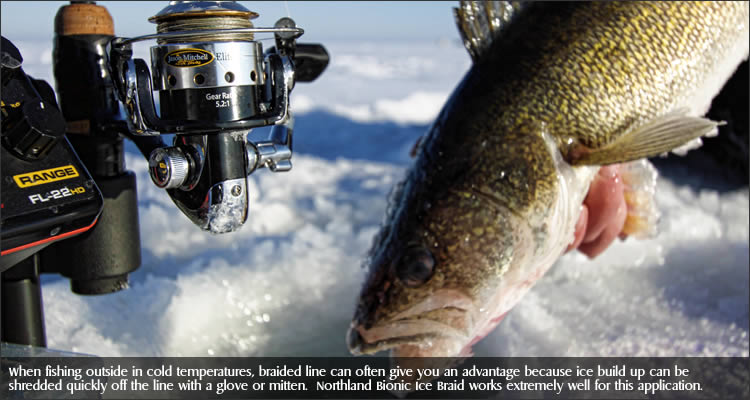 The reality is that during that first ice period when we are walking on the first three inches of clear virgin ice making those very first footsteps, we are dealing also with some of the first real cold weather of the season. Balmy and sunshine doesn't make ice. Chances are that we are fishing in bone chilling cold where the ice booms and moans through the night like a civil war battlefield. When I was younger, I was a pretty enthusiastic and ambitious angler who would typically find ice to fish and tolerated some fairly miserable conditions where I didn't have the proper clothing and even chopped holes at times by pile driving holes with fence posts through a few inches of ice so there goes everything you ever heard about spooking fish at first ice. We fished in some miserable conditions and tolerated the uncomfortable of the situation because we wanted to fish so badly. I still have that passion but the gear has gotten so much better that I seldom experience any of that former misery anymore.

When I am walking out on early ice that is less than six inches, I often simply walk to close by locations where I caught fish in the fall. Regardless of what species I am after, most of the fishing is relatively shallow and often close or in proximity to the shoreline contour. Don't out think the fish as most places won't get busy until you get at least six inches of ice so pull fish off the obvious spots first. Weeds like coontail are typically still green so nice weed bed edges are obviously good for just about all fish but for walleyes and perch, gently sloping sand shelves or gravel shorelines that drop off into deeper water can be dynamite. If there is any weed growth like some patches of broken down cabbage, chara or carpet weed, the spot can be even better. Flooded timber can also be good. Often during the early ice period, we often find walleye and perch together or crappies and bluegills together. Some stretches of shoreline or some parts of the shoreline structure however, will just have more activity. If you start seeing activity on your Vexilar, even just bait fish or invertebrates rising through the water column when the sun sets, you are getting close to the zone. Finding the general areas and depths typically doesn't take long. Just remember to look at the big picture so that you can slow down when fishing through some spots. If you are after walleyes and catching a few perch, slow down as the walleyes are around. If you are after crappie and find pods of bluegills, slow down as the crappies are typically nearby. 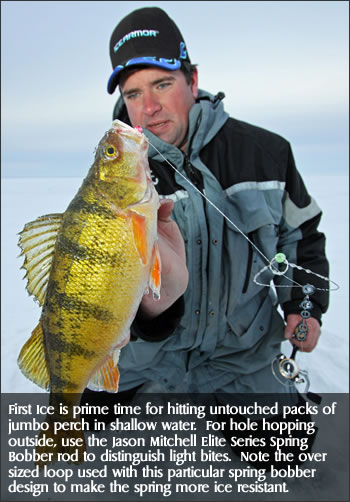 Early ice is typically a time of the year when a person can walk out and expect to catch some fish. This time frame is typically one of the best times of the entire season to ice fish. There are a few unique challenges however to catching or finding fish at early ice. Like mentioned earlier, conditions are often brutal. The right clothing makes all the difference in the world for enjoying your time outside. There are a lot of really good cold weather suits out there and to be honest, some are actually too warm if you are moving or doing any activity at all. My favorite cold weather suit is the Ice Armor Grey Suit. With this particular suit, I have fished outside in thirty below temperatures all day and was comfortable but just as importantly, the suit is still comfortable when the temperature is thirty above. If you plan on walking on ice, get some ice cleats, or if your soles on your boots are thick enough, even tack a few drywall screws into your soles so that you have some traction. A tow rope that hooks up to your shoulders makes towing a sled or Fish Trap much easier. Clam manufactures both the Fish Traps and the tow ropes for serious ice anglers. Keep gear to a minimum when on foot for obvious reasons. If you are planning on really exploring the lake, the Clam Scout or Pro one man shelters are perfect because they are simple enough to still tow easily. These light weight shelters offer heavy duty protection from the elements when needed and there is plenty of room to store your gear. A bucket, Mora hand auger, small tackle pouch, a few of our Jason Mitchell Elite Series Rods, rod case along with a GPS and Vexilar round out all of the gear in my Trap.

Unless I plan on doing a lot of sight fishing, I often like to fish outside and hole hop. I often just use the Fish Trap to haul my gear or I set up when I am tired and want a break or if I get on a really hot hole. With that being said, here are a few tips for fishing outside in cold temperatures. When the temperature is less than about ten degrees, I really like to fish with braided line when fishing outside. Many people make the mistake of thinking that braided line is no good when fishing outside in the cold because it typically absorbs water. Yes braid will ice up faster than mono but what I have found is that I can shred the ice off the line much easier by just running my mittens down the line and the line seems tougher in the cold. With mono, the ice just seems to slide down the line and you eventually have to put the line in your mouth to melt the ice off. Northland Tackle makes a Bionic Ice Braid that works extremely well. Ice on line however costs you fish because it is harder to distinguish bites especially when targeting panfish so be diligent about shredding the ice off the line. When it is so cold that I have to use choppers or gloves, our over sized spring bobbers that we designed for our twenty and twenty four inch Jason Mitchell Elite Series Spring Bobber rods save the day as this particular spring bobber rod gives you sensitivity in the cold and is fairly ice resistant.

Lastly, always keep safety in mind. Use a spud bar to check ice in front of you when walking on questionable ice. If water comes up the hole or the ice gets wet when you pound the spud bar down, back off the same route you came. Keep at least a couple of screwdrivers in your pockets to help pull you out if the worst happens. Put a cell phone in a waterproof bag and put that in your pocket. Wear an inflatable life jacket and avoid springs, muskrat huts, beaver lodges, feeder creeks and other moving water. If you do ever fall through, don't panic and don't worry about taking your boots or clothes off, you clothes will actually float for a while. Keep your head out of the water. I didn't have screwdrivers or anything to grip the ice with one time when I fell in so I got out by laying on my back and kicking my feet until I got up on the ice far enough to roll over on my belly and crawled out. This sounds simple but getting out of the water is absolutely exhausting. Safety is nothing to compromise as falling through the ice is scary, dangerous and serious business. StrikeMaster actually makes a jacket that was designed for first ice safety with ice picks and cleats on the elbows. First ice is rewarding and productive but neither of that matters if you don't use common sense and fish with safety in mind.