Icing Hawgs in Crystalline Waters... the Answers are Clear

The distinguished angling trio, who reside in Michigan, Illinois and Ohio, respectfully, are surrounded by some of the clearest water in the country. These waterways have always been lucid enough to see bottom in 20 feet of water, even before the HEPA-filter-like zebra and quagga muscles invaded their way into the systems, siphoning waters even cleaner than before.

"What many anglers don't realize is that catching fish from ultra-clear waters- even with a thick layer of ice on them- can be as tricky as during the open water periods. It takes a stealthy approach and specific equipment to fool fish into biting," says Brumbaugh. The three fishing aficionados have been teaching students at the Ice-Fishing Vacation School about catching many different species of fish from on the frozen tundra of Lake Huron's Saginaw Bay for several years now. This fishery has become cleaner every year, and what they've learned during the bay's transformation has even surprised these already knowledgeable instructors.

Walk softly and carry a sharp auger
Wherever you are right now, look up. What do you see? Notice how clearly you can see the sky, the ceiling, or whatever it is you're looking at? Now imagine you're a fish and the water's as clear as the air around you, and the ice over your head is as translucent as a sheet of thick Plexiglas. You, too, could see whatever it was over your head. And if was moving and making noise, more than likely you'd become alarmed and vacate the area. That's exactly what fish do. 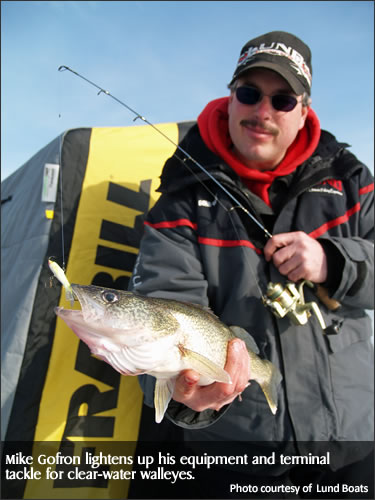 "If the ice is clear, I make sure to set up my portable shanty onto any snow that may have drifted onto the ice so as to blanket my silhouette, movements, and muffle any sound I might make," Brumbaugh says. If the ice is hard and transparent, he'll fish inside his Frabill Thermal Predator shanty-the insulated material shadowing any stirring from within-even if it's warm enough to warrant fishing outside.

Once he's drilled sufficient holes with his StrikeMaster power auger, and his shanty's in place, Brumbaugh removes his ice cleats, and to further reduce noise, lays down a piece of carpet to place his feet on. "I've seen fish dart off the second any noise is made, or even when I just move," he says. "Fishing from within a shanty is a must when atop snow-free clear ice, no matter what depth you're fishing."

Lighten up!
When Gofron ice fishes clear water, he lightens up his equipment and tackle. "The biggest mistake I see the students of the ice-fishing school make is they use too heavy of line and terminal tackle," he says.

In clear water situations, Gofron drops down to 6-pound-monofilament for his main line, and then attaches a tiny swivel (a must for warding off line twist when using larger lures.) He then secures a 1-foot section of fluorocarbon leader and a small snap (not a snap-swivel.) "Too large a swivel may distract fish away from my lure," he adds.

A good answer to the swivel dilemma is Aquateko's InvisaSwivel-a transparent fluorocarbon-based swivel that is also nearly neutral in buoyancy, so as not to impede the action of a lure, or even a lightweight flutter spoon. The 12-pound-test InvisaSwivel is a great match for clear water, light line jigging.

See 'em and hook 'em!
Martin is a firm believer that an immediate hook set is a must when fishing clear water. "The fish are already weary about hitting a lure in this situation, and they'll spit out a hook faster that the blink of an eye once they realize that something isn't right, or real. You almost have to set the hook before you feel the strike," he says.

The perfect remedy in Martin's eyes is an underwater camera, which lets him watch a fish strike before he feels it. "It doubles my hook ups, and then some," he adds. Martin currently employs a MarCum VS825SD. With the camera's large 8-inch screen and super-clear color image, there's no doubting when a fish strikes.

"But you don't want the camera hanging down and looking out to the side, but rather aim it downward and have it suspended well above the fish. With a large color screen, you won't miss a thing, even when it's dangling several feet above the lure," he adds. You can also use MarCum's Camera Panner, which lets you scan the clear water all around your position. Martin says some fish, especially large walleye, can be wary about the camera hanging in the strike zone in clear water situations and won't come near the lure, no matter how badly they want it. Suspending the lens well above their level solves this dilemma.

Fortunately, if you're having trouble icing fish from crystalline water, the answers are clear: fish from atop any snow on the ice, rather than the clear, bare stuff. Employ a portable shanty. Downsize your line, and your terminal tackle. Use an underwater camera and as soon as jaws snap, set the hook!