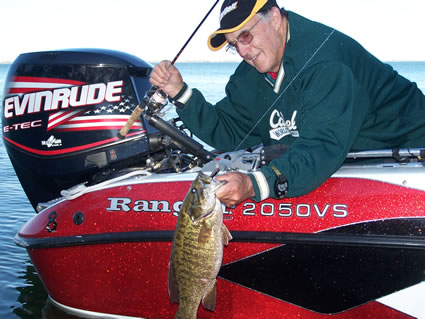 Labor Day 2011 has come and gone. For some folks, that marks the end of summer, and to some people that means it's time to put the boat and their rods and reels in storage. If they want to pull the plug on fishing in early September, that's certainly their decision, but, if they live in the Midwest, they're missing out on two months of some of the best fishing of the year. I'm guessing that if they live somewhere else, they're also missing some outstanding fishing opportunities. The following ideas will enable you to successfully extend your fishing season.

Keep in mind that different bodies of water will be productive in the fall at different times. A shallow lake with dark water will often be better earlier in the fall, while larger, deeper lakes with clear water will turn on a little later in the year. Small shallow lakes cool off earlier, so the fish in those lakes are reminded by Mother Nature that autumn is coming and they need to fatten up. This reminder comes later to fish in the larger, deeper lakes. Rivers will continue to provide great open water fishing after the lakes in the area have frozen over.

As the water cools off, slower presentations will become more productive. Crankbaits can be good for walleyes early in the fall, but a jig and minnow or jig and soft-bait will get better as the water cools off. It used to be thought that a jig and soft-bait lost it effectiveness in the cold waters of fall, but more and more, we're learning that a jig and Gulp! or Gulp! Alive will be just as good as live bait late in the fall much of the time.

The same thing holds true with largemouth and smallmouth bass. Either of these will aggressively eat a spinnerbait or buzzbait early in the autumn, but as the water cools, largemouth will be more frequently caught on a Jungle Jig tipped with a piece of soft-bait with a subtle action.

When it comes to smallmouth bass, a dropshot rig will be very good. I fondly remember my introduction to dropshotting. It was October and my friend Barry Day and I were on West Lake Okoboji in northwest Iowa. Barry was in on the early days of dropshotting and was going to show me how it's done. As we were putting the boat in, a boatload of anglers were leaving the lake. They suggested we forget about fishing: They'd been throwing spinnerbaits for several hours and hadn't had a take. Barry assured me that we'd get bit. Barry was right. In the next four or five hours we caught a bunch of smallmouth and largemouth, a few walleyes, a couple of pike, and a variety of panfish, all on dropshot rigs. Just remember that in the fall, slower presentations will often be better.

Also remember that much of the time, larger, bulkier baits will be better in the fall, especially if you're looking for big fish. Not always, but often.

Autumn weather can be chilly. I always have my Cabela's Guidewear in the insulated version in the boat this time of year. It enables me to stay comfortable in conditions that could be uncomfortable.

If you choose to go hunting or to the football game or to rake leaves on a nice day in the fall, that's your call. Just realize that you could be missing out on the some of the best fishing of the year.