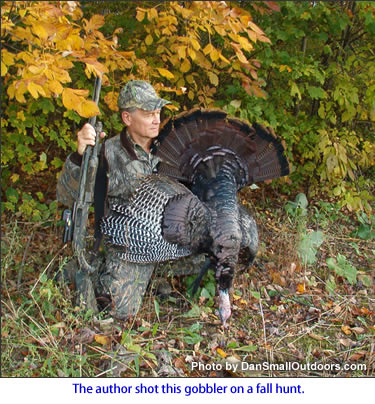 Many hunters apply for a fall turkey permit, then tuck it into their backtag carrier when they bowhunt for deer, just in case a flock wanders by. Others carry their turkey permit into the grouse or squirrel woods for when the action slows on one of those species, or again, just in case...

A few hunters, however, relish the chance to go one-on-one with a tom when he isn't interested in hens, when he could care less what your calling sounds like, and when you can't get him to gobble away his location regardless of what breed of peacock, owl or auto horn you toot.

Call me crazy, and many have, but I think fall turkey hunting is a gas. I've been foiled more often than not by fall gobblers. Actually, by their indifference more than anything. And when I do bag one, there's always that nagging feeling that it was partly by accident.

But then I've bagged gobblers in the spring by accident as often as by design, and I've not noticed the thrill to be any less intense.

While the game plan may be far less obvious in fall than in spring, and the feedback from your quarry practically nonexistent, you can nonetheless hunt gobblers in fall with some reasonable hope of success. And if you don't succeed, you can always pop a tender jenny.

Fall turkey behavior
Unlike in spring, when birds are scattered and toms are loudly vocal, in fall turkeys travel in groups and don't have much to say.

Both of these behaviors present problems. You can walk miles between flocks, and then when you find one, it's hard to get close. Fooling one bird in spring is hard enough, but all those pairs of eyes make it a lot tougher.

Since turkeys are not as vocal in fall as in spring, getting one to respond to your calling can be a frustrating task. You won't know how you're doing until one shows up, or until nothing happens.

Step one, though, is simply finding birds. Adult hens and their broods often travel together in flocks of several dozen or more. Adult toms stick to themselves, usually in much smaller groups. Jakes are most often found with the hen flocks, but they may strike out on their own in small flocks.

Look for sign now as you would in spring: scratchings, molted feathers, droppings, flipped cow muffins, tracks in mud or dust. Gobblers make bigger tracks, leave J-shaped droppings and have larger wing and tail feathers. Their breast feathers are bronzed or black-tipped.

If there is a reliable source of food available - acorns, waste corn and other grains, insects in alfalfa - gobbler flocks will often follow the same pattern day after day, as long as the weather remains stable. They'll roost in the same area each night, fly down at the same time each morning and take the same route to food.

Hunting strategies
The classic fall hunting strategy is to locate a flock, bust it up by running at it and yelling to scatter the birds in all directions, then set up where you found the flock and call birds back to you with a kee-kee call or hen yelp.

This technique works fairly well with young birds that are afraid to be alone and are eager to get back together. The first farmer to whom I explained the scatter-and-call-back method when seeking permission to hunt nearly died laughing.

"If you get that close, why not just shoot one?" he howled.

Indeed, why not. That's why I hunt gobblers. This trick may work on young birds, but gobbler flocks either fly off in one direction or don't bother to try to regroup if scattered. Either way, you're out of luck.

One strategy is simply to lie in wait for a flock of toms along their path from bed to breakfast and ambush one as he strolls past. Not terribly exciting, but it often works. If the group ventures slightly off its usual route, however, you'll be stuck unless you can bring them to you.

This is where decoys and calling come into play.

Try to get to where toms have been feeding before they do in the morning and put out a couple tom or jake decoys where they'll be seen. Set up near the decoys and call very sparingly with a few slow, deep yelps. If the flock shows up, they may eventually work their way toward you to see who the new guys are.

The first fall I tried this, I didn't wait long enough for it to work. I sat along the edge of a strip of alfalfa between the woods where I knew toms were roosting and some standing corn where they had been feeding. A flock of hens and jennies showed up first. Their clucking and purring was barely audible from 50 yards. 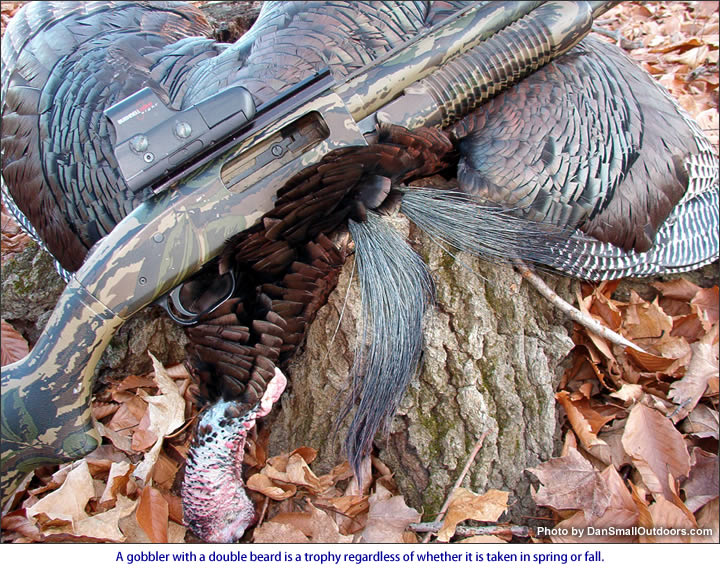 After they wandered off, I sneaked in a circle through the corn and another small woodlot where I thought the gobblers might have gone. As I was walking back to my decoys a half hour later, I spotted a red head eyeballing me.

There, standing right among my three jake decoys, were the eight toms I had been hunting. They had me pegged and simply melted back into the woods before I could do anything.

Probably the best way to tag a tom in fall is to roost one, then set up close to him in the morning. Lenny Heisz and I were hunting in Crawford County one fall when I had drawn two tags. I had already tagged a jenny from a flock we scattered and called back. Now we were looking for a tom.

Late one afternoon, we flushed a group of five or six toms from standing corn onto a wooded ridge. We sat down near the edge of the cornfield and waited until we heard the birds fly up to roost, then retreated to the truck.

The next morning, we set up near a trail that led from the ridge to the cornfield and waited. Before sunup, several toms actually gobbled once or twice, then the flock flew down. Lenny yelped a few times to coax them along the trail. At 20 yards, one tom stepped into the open and I dropped him. We were sure the birds were headed for the corn. We were also pretty sure Lenny's calling helped.

That was my first fall tom and the one that got me hooked on hunting second-season gobblers.