The Art of Triggering the Bite 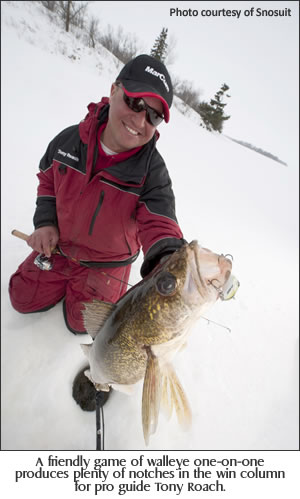 Lure Moves for Walleyes in Reality

Last February, fresh off a phenomenal trip to the current version of hog walleye heaven-Lake Winnipeg, Manitoba-Tony Roach could hardly keep himself from jumping out of his Snosuit. "Here we were," Roach exclaimed, jigging arm twitching randomly, "Standing out in the middle of the 'Winnipeg Wasteland,' ripping these clunky rattling crankbaits-lures like the Rapala Rippin' Rap. You'd pound these things into the bottom with heavy line, didn't matter, and halfway up your jigstroke, WHAM, these big 'eyes would jolt your arm to a dead-stop. Locals were catching 12-pounders on 20-pound test baited with hot dogs!" Befuddled, Roach muttered, "If I could experience one or two bites like that at home each winter, I'd be a happy camper."

What you must understand at this point is that like the rest of us living in the real world, Roach is used to jigging tough winter walleyes with the finesse and precision of a puppet master. His walleyes are your walleyes. And on rush hour traffic fisheries like Mille Lacs, Minnesota, clouds of baby perch and ciscoes surround walleyes in every direction. For these "real world" walleyes-the direct opposite of the roving hunters on Lake Winnipeg-feeding requires no more movement than snapping their jaws.

You begin to understand why Mille Lacs walleyes remain some of the most frustratingly selective specimens on the globe. Roach deals with these snooty fish nearly every day of winter, so you'd think he'd be sneaking off to the Lake Winnipegs of the world as often as possible.

Not so. As a fulltime guide here, failure doesn't compute. But more than that, though he'll deny it if you ask, Roach likes his fish a little on the tough side. He's got a fiery streak, and to be perfectly honest, T-Roach keeps catching walleyes pretty much all winter long anyway.

The deal is that Roach has simply learned to read the moods of each individual fish as it slides across the screen of his MarCum flasher. Among top-tier fishermen, it's pretty much what the game of jigging for walleyes through ice eventually becomes-a one-on-one dual with each fish, as revealed by electronics. If you're paying attention, you learn a few things. And if you're good, you eventually recognize certain clues that unfold on screen, reacting appropriately with lure moves and tweaks. T-Roach knows, for example, that when a school of bait that's been littering his screen for minutes suddenly vanishes, it's time to get aggressive with his jigging strokes. Big mamba-jamba is lurking.

The Triggering Game
If Roach is using one of his high-resolution MarCum cameras, the view of such a fish biting on screen can be utterly thrilling. Usually, he reserves the camera for tough bites, though, opting for the flasher anytime he's on the move. Beginning with the active fish Roach encounters on fresh spots, then progressing to trickier walleyes and finally, those bottom-hugging sloths he terms "comatose fish," Roach provides a play-by-play analysis.

Burners (Active Fish) - Roach: "We call hot fish "burners" because they paint these deep red blips on the MarCum screen. When you mark a burner a foot or so off bottom, you know there's a good chance you're going to get bit. I'll often start with a heavier, semi-straight spoon such as a 3/8-oz Buck-Shot or even a Rapala Rippin' Rap. Hot fish-especially bigger ones-relish biting big flashy baits.

"When my spoon has dropped to about 2 feet above the fish, I'll stop it and watch for a reaction. You want that burner to swim over, rise, and strike. If the fish chases but doesn't hit, I give the spoon a short, semi-soft pop-pop with the rod tip, then do a slow raise-pulling it up a foot or so before pausing again.

Passive Aggressives - Next are fish that chase your spoon, over and over, but won't bite. "I'll give the lure two quick pops to gauge the fish's interest. If the fish slides back in, I'll go back to slowly raising the spoon again. Often, the fish will continue to follow. Watch the speed the fish swims as it follows, and try to match it with the speed of your spoon's ascent. This keeps the fish's interest much more than if you pull it up too fast or too slow.

"A move that often seals the deal here is to do some gentle shaking of your wrist while you're raising the bait. You need to be able to do the raise-shake very slow, often no more than an inch at a time. As you're doing this, you often feel just a tiny bit of extra weight-like the spoon has picked up a small weed. Reel down quickly and bury the hooks!" 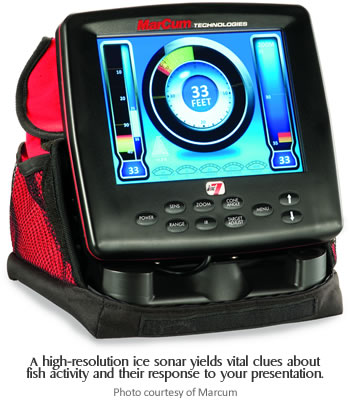 Head-Bangers - Another move that works for 'passive aggressives' is to thump bottom. The fish quickly swims over and meets the bait, but immediately starts to fade off the screen-nasty rejection.

Roach: "I do two quick pops again. If there's no reaction, I'll slam the spoon into bottom. On sand, I like to really thump it around. On softer mud or silt, you need to keep the banging to a minimum-don't stir up too much of a cloud. This can spook fish. On rocks, all it usually takes is a few bangs. A heavier spoon can really make noise-especially a rattler like the Buck-Shot. Less is better here.

"Sometimes, the fish will fly back in and whack it right on bottom. Otherwise, once I've regained the fish's attention, I'll immediately begin a slow raise-shake move. If the fish still won't hit, try another bottom bump and immediate raise-shake. Things can get tricky, but if I've got a fish that keeps coming back for looks, eventually, I'll get him to bite."

Comatose Fish - Time for a last ditch effort to scratch out bites the day after a coldfront. Roach breaks out the underwater camera, sets up in a shelter, and opens a bag of tiny minnows. "These fish aren't moving much-or at least, they won't react to typical spoon moves. So I like to force feed 'em." You want as little spoon movement as possible, Roach says. Find the smallest, yet liveliest minnow in the bucket. Slip the hook tine through its lips and drop it down to the bottom. Watch on camera. Hold it just above bottom so the minnow's tail sweeps puffs of sediment. The whole package looks like a baitfish bottom-feeding on invertebrates.

"Sometimes it happens really fast. A walleye scoots in, grabs the bait and vanishes off the screen with a mini mushroom cloud of silt. Rod doubles and it's game on. Done right, we've salvaged entire trips on horrible post-front days- set up nice and snug inside the Frabill, watching the walleye reality show on underwater TV."