By Ted Pilgrim - September 1, 2011
When "Cold, Dark and Damp" actually signal Comfort and Good Fortune
If you're not careful, being on water when most everyone else isn't can quickly become the central theme of your muskie strategy. Since fishing during the closed-season months is automatically ruled out, what we're left with are those 'dirty weather' days when winds howl and rains fall, right along with plummeting air temperatures and barometric instability. Fishing on days like these can easily begin to feel a little crazy, at least until you remind yourself that these are muskies you're after-a fish that often defies logic and reason itself. Which, in a twisted sort of way, makes fishing in illogical conditions start to make sense. 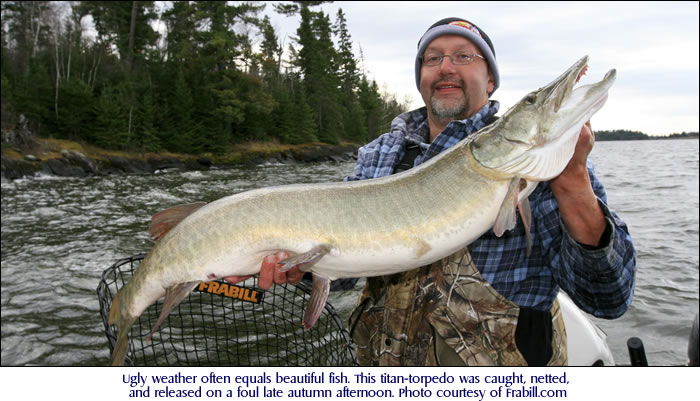 Although sunny, "feel-good" TV shows don't seem to agree, the reality is that the truly supreme big fish bites-especially in autumn-can occur on the some of filthiest weather days imaginable. All day rains, ominous clouds and gusts across the water, even bitter cold and snow in late fall often produce dramatic appearances by prodigious predators.

For anglers hardcore enough to "be there" when others aren't, the reason is: That's when monsters come out to play. This is especially true on battered and beaten water where anglers often outnumber the muskies themselves. You might see things (and fish) on the worst weather days that few other anglers ever see. Of course, be careful what you wish for. The right kind of dirty weather can quickly become ugly and mean, producing big hail and cracking thunder, which nearly always makes muskie slink back into the weed-work.

Casting in Comfort
Even though comfort isn't usually something that's often associated with muskie fishing (think 12-hour days slinging half-pound baits) staying warm and dry in cold wet weather really is more than a luxury, it's a requirement. Think casting gi-normous baits all day is tough? Try doing the same thing while physically soaked and iced to the core.

These days, the savviest hardcore anglers are relying on Frabill's fishing-focused FXE Stormsuits to stay comfortable and functional on the water. That's a big deal, albeit something we don't think about until it's often too late. After fishing through decades of brutal Midwest autumns and winters, the diehard angler-designers at the Wisconsin based company finally decided that enough was enough- it was time to give anglers the kind of functional outerwear they could trust in extreme elements.

It's why these days, when the weather turns ugly, top fulltime guides, including Frabill Pro Staff Bret Alexander, Eric Haataja, Jeff Gustafson and Pat Kalmerton each don Frabill FXE Stormsuits, never giving the elements a second thought. Then, even on bitterly cold October and November trolling runs, a pair of FXE Task Gloves safeguard those precious paws. They're not ski-gloves, boxing gloves or clumsy snowmobile gloves. Frabill's FXE Task Gloves are authentic fishing gloves- and they excel at keeping hands warm, bone dry and totally functional for handling rods and nets, while defending against finger-shredding fish.

Sour Weather Strategy
Of course, getting a big green fish to eat something with hooks is still the objective. And doing so in extreme elements is often best accomplished by working some of the most classic big fish zones on lakes and river. On lakes, the top strategy simply involves checking as many great fall spots as possible-major points that extend and then plunge into the most massive sections of deepwater available; complexes of submerged rocks that extend in every direction, and jut up and down into varying depths; even remaining vegetated flats that border deepwater. Fish the highest percentage spots you know, especially the ones harboring wind-driven current, peppering each zone with a handful of casts before moving on to the next. In rivers, you often slow things down a bit more. Zero in on outside river bends near major deep holes in the main channel. Meanwhile, creek mouths or feeder stream areas can also attract muskies.

You can score fish with a lot of different baits, but the pinnacle producers are often big wooden or plastic offerings, such as Storm FlatSticks, River2Sea Wide Glides and old classics such as the Suick and Bobbie Bait. Rapala Super Shad Raps are another fantastic option in many waters. Each is best partnered with Knot2Kinky titanium leader wire.

Just keep casting different spots, and eventually, you'll get cracked by mister mean green. Don't linger on any location for too long. Hit all the low hanging fruit while bad weather persists. Which, ironically, is usually the exact wrong approach on rivers. Cranks and jerks can be equally effective tools; as can trolling long deeper stretches. But as late fall progresses and weather worsens, slowing down and hovering over deep holes often produces best. Entertain great big suckers in a Frabill 1409, and sacrifice them one by one beneath a slip float. Working a mega softbait or Bull Dawg deep is another viable option.

Back in lakes, though, the biggest mistake anglers make is to assume that cold water and foul conditions slow muskie metabolisms too much, which dictates a slower retrieve. Absolute nonsense. Trolling big plugs at 6-mph or more from a brawny Lund warship has been a classic fall presentation forever. So why should your casting approaches be any slower? Speed reel a Super Shad Rap-get it to do some serious head-banging in the rocks. Grind a big spinnerbait through bulrushes. Such fast, aggressive (and noisy) approaches trigger lots of bad weather muskies.

There's just enough foul weather magic in the water to keep an angler guessing. Could it happen today? You're alone on the water, yet anything but lonely. Clouds warn; rain and wind foretell. Dark shape appears. A vague whiteness quickly expands around then envelops the entirety of your lure. And the jolting intensity that follows is not likely witnessed by another soul on earth.