By Jason Mitchell - September 1, 2011
As an angler, I find the distribution of northern pike fascinating. Pike basically inhabit the northern latitudes of the entire globe spanning from North America to Europe and Asia. In some high mountain lakes and the arctic shield, pike are considered an invasive species. The predatory appetite these fish possess is incredible. While pike are indeed common across the upper Midwest and much of Canada, big pike are really a rarer treasure. Many fisheries are not capable of producing big pike and more than other species of fish; big pike seem most susceptible to fishing pressure. In order to catch big pike, pike have to live long enough in the right water.

Big pike either need regulations, lack of fishing pressure or relate to patterns that keep them safe from anglers. Some lakes in Canada for example are either remote or have regulations that require the release of most fish. Other fisheries like Lake Sakakawea and Lake Oahe in North and South Dakota produce big pike because of the vast size of the water and with very few anglers targeting pike these fish live long enough to reach impressive sizes. Both of these Missouri River reservoirs are going to be producing some really big fish over the next ten years as the high water situations right now are optimum for pike. Lake of the Woods is another incredible fishery for big pike. Devils Lake, North Dakota along with Minnesota's Red Lake are also worthy of consideration.

On water where big pike exist, fall is an excellent time to target trophy fish for a few reasons. First off, weed beds that reached the surface and choked shallow structure start to open up again as the water cools down. These areas become easier to fish not to mention that fish that are using weeds have fewer areas to hide. What also happens is that deep fish that have been relating to forage over open water or deep structure often move into shore and set up on the last remaining weed beds. Activity just seems to peak in the shallow water during the fall.

Every lake is different especially with shoreline profiles and weed communities but across the board, my most productive type of spot come fall combines rock and good cabbage. This combination is very difficult to find. Typically, most of the cabbage grows over sand and weeds don't typically grow well over a hard bottom. Shallow structure that comes off the shoreline that drops into deep water is a prerequisite for this type of spot but the bottom has to shift or change enough to combine both rock and sand on the same spot so that you get both rocks and cabbage weed within tight proximity. Broad leaf cabbage by far is the best but some pencil reeds are good and pencil reeds typically grow over gravel or small rocks. Some weed variety within or in the edges of the cabbage is good like dollar weed or coon tail. 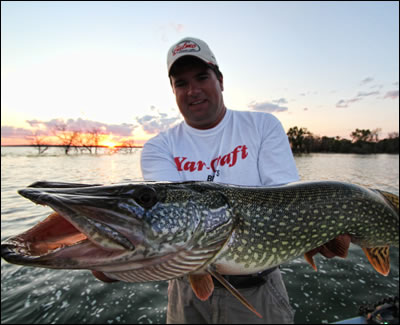 Combine good weeds with round rocks and boulders that range from bowling ball to trash can lid size and you have yourself a spot where you will probably pull big pike each season. Now the weeds are only good if they are green without the browning residue. Broadleaf cabbage is one of the first weeds to break down in the fall on the water I fish so finding good weeds takes some research as there might be only a few clumps of good green weeds left on a much larger spot and these tight locations really narrow down how fish set up on these spots. The narrow leaf cabbage often seems to grow a touch deeper and will sometimes stay green later into the fall, as the cabbage breaks down completely many fish seem to reposition over coon tail or some other weed variety that is still green.

Weeds and rock is a magical combination and on the water I fish, there are only a relative handful of spots that offer both of these elements on one spot. This combo can be difficult to find but worth the effort to locate.

For working the tops of weed beds for big pike, I don't always use big lures. What is most important is casting where big fish live. Regular bass size spinner baits and swim baits are tough to beat with Northland Tackle's Reed Runner Spinner Bait a favorite. In my opinion, you can't beat chartreuse/ fire tiger color patterns along with white for pike on most bodies of water. Another great pike lure is a Mimic Minnow which is a soft plastic paddle tail bait rigged on a pointed jig head that tracks through the water nice regardless of retrieve speed. Where gaps and troughs exist in the weeds or over the tops of rocks where open water is present, nothing beats a suspending minnow bait. The bait can be popped hard to emit a lot of flash and vibration and than stopped or twitched and this start and stop is just too much for pike to resist, they really eat these baits. A great bait that is hand tuned to run true and also really has a killer action is the Salmo Suspending Sting. If weeds or fouling up is not a factor, I don't know of a better lure for consistently catching big pike.

For anglers targeting trophy pike, the fall period is one of the best times of the year if you enjoy casting and want to target fish on shallow shoreline orientated structure. Fish that have been able to avoid anglers all season over open water for example now become accessible by casting.