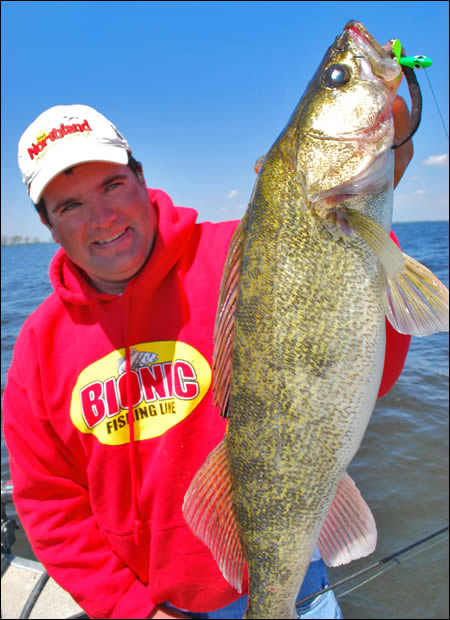 Wind and chop on the water often makes or breaks walleye fishing success. As wind directions and velocities change through the course of a day, adapting to the opportunities created by wind requires some flexibility. Mid summer often finds extended periods of stable weather with varying wind. One of the top patterns particularly for shallow or aggressive fish is rolling with what the wind deals. Following wind and focusing efforts on shorelines or structure that is getting pounded by wind is a top strategy. Obviously, too much wind can stain the water too much but generally speaking, some stain in the water created by wind can create short periods of incredible activity. What can make these patterns more remarkable is that there are many spots that only produce one day. Fish can be stacked on a spot and with a switch or change in wind, the same spot can be dead twenty hours later.

In order to capitalize on wind, an angler has to fish by the seat of their pants and hit spots as opportunity creates them. On the Missouri River reservoirs in particular, anglers have long touted the importance of fishing mud lines, which were essentially columns of muddy turned up water that protruded from points and high banks. The sediment suspended by wave action often forms a temporary umbrella that spikes walleye activity. Like anything else, too much wind, too much sediment, too dirty of water can hamper the bite but typically on most bodies of water, some wind, some stain creates windows of opportunity. When looking for stained water or mud lines, you can essentially see the different colored water, you can see the muddy water protruding from the shore and you can also see where the mud line stops and the water turns green or blue.

The location of position of fish will often change as the mud line develops and lingers. Often, during the beginning stages of the mud line forming, we often find fish right in the thick of it but as time passes and the mud line gets larger and extends from the shore, we often find fish relating to the edges of the stained water. Ironically, there are times when the walleye bite happening around mud lines seem to taper off after an extended period of time. I have often felt like the bite slowed down as the debris on the top of the water column extended from the shoreline and began to settle. Mud lines definitely have a life span and the flurry typically doesn't last forever.

Some mud lines are larger than others and are obviously dependent on wind velocity, wave height and type of structure. Some shorelines for example might have a long veil that extends out to a certain depth and this veil of stained water might proceed for miles. In this situation, trolling might be really effective for covering the water necessary to contact fish. Often however, we find mud lines isolated and spot on the spot. A single point with a single mud line for example and we do really well by casting as we can focus on specific features.

In this stained, typically shallow water, we often cast either crank baits or jigs and both presentations really shine at times. For hitting spots fast and jumping several points that have wind blowing in on them, nothing is better than just pulling up to the point and cracking crank baits across the point by casting if you just want to see if there are any fish home. We often start or find fish by casting crank baits. One of my favorite tactics however once I devote myself to a spot and I know there are fish present is to cast a Northland Tackle Whistler Jig. I typically tip the jig with either a leech, minnow or half crawler and sometimes use a soft plastic tail like a Trigger X. I error on the heavier sizes and just either slowly reel them back to the boat or pump them like an underwater yoyo. I believe the prop really helps catch more fish in these situations.

Few things are more dreaded amongst walleye anglers than flat calm conditions with no wind. Flat water that has good visibility is a tough situation. Obviously we can't control the weather but there are a few ways to catch fish in these tough conditions. Often even on flat calm days, there will be windows of opportunity where there will be just a slight ripple on patches of the lake. This can sometimes create a window where you can pull a few fish. If I can see just a slight ripple, I will make an effort to either point the boat towards it or cast towards it. A little bit of ripple when the lake is glass can really create a better opportunity.

Another really good tactic is to look for still stained water from wind or wave action that happened on days prior. "Fishing yesterday's wind" can be an extremely productive tactic for finding stained water that still holds some sediment particles. Places where dangerous waves crashed up onto shorelines or across flats just a day

"Ski boats and recreational boats might not be popular with anglers but that wake slopping on a point or weed bed all day can save your tail when things get tough..."
or so before can become hot after the wind lays down. Every lake is different with some lakes clearing up almost instantly but some lakes will hold some color in the water for days after a strong wind.

Boat wakes can also cloud up the water as well when large wakes roll up across shorelines or move weeds. Many weeds will have a thin film of sediment on the leaves, particularly cabbage. If there is enough movement, the sediment will cloud up the water. On flats days where the water really clears up, anglers can sometimes find some stained water near areas where there is heavy boat use. Ski boats and recreational boats might not be popular with anglers but that wake slopping on a point or weed bed all day can save your tail when things get tough. I don't think fish are spooking from the traffic and get use to the commotion like all of the other animals on the lake. Stained water created by boat wakes can create some surprisingly productive opportunities often in really shallow water.

Another potential savior for tough flat conditions are carp. A very productive tactic that has worked for me on many lakes with clear water is to basically look for roaming schools of carp and fish behind the carp. Typically, you can see these schools of rough fish rolling through spots and they typically stir up the bottom and leave some stained water behind as they forage along. I have often found walleyes just steps behind these roaming carp. Whenever you have shallow water walleye patterns that are dependent of wind, roaming carp can keep some of these patterns alive after the wind dies down.

Many clear natural lakes and reservoirs depend on wind or wave action to really activate the walleye bite. Taking advantage of wind often merely requires the mindset of an opportunist. When the wind stops however, there are situations that can enable you to pick off additional fish during some of the toughest conditions. Recognizing and adjusting to opportunities that dirty or cloud up water can create great fishing.