By Jason Mitchell - August 1, 2011
Many anglers struggle to catch walleye as late summer progresses into fall. Fish can be scattered and patterns can seem inconsistent. Typically on many fisheries where several forage options exist, there can be a lot of different patterns happening at once with no single pattern dominating fish location. There might be fish scattered both shallow and deep. What we often find ourselves doing is instead of looking for the silver bullet pattern where the bulk of the fish in a particular area are doing something specific; we often fishethrough good spots fast… attempting to fish as many spots as possible as quickly as possible. 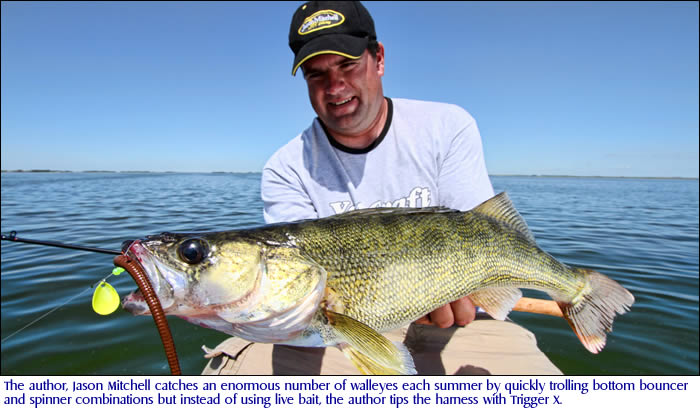 On Devils Lake, North Dakota where I made a living catching walleyes along with many other bodies of water where we travel to film, water often greens up as summer wears on and this algae that mixes through the water often seems to coincide when spinner harnesses really become effective. For covering a variety of depths, contours and for fishing through spots quickly, bottom bouncers combined with spinner harnesses are deadly effective. Most of the time, the extra flash and vibration of a spinner blade seems to be more productive than a plain smell once the water warms up past seventy degrees. My favorite harnesses by far are the Northland Tackle rainbow spinners. These harnesses are balanced with the right size hooks, line, beads and blade size so that I can fish fast or slow and the harness rolls through the water nice without twisting. Holographic colors are hot along with the baitfish image patterns. The only adjustment I might ever have to make to the Northland Tackle spinner harness is shortening the snell which I often shorten to about two feet when fishing weed bed edges and heavy debris. 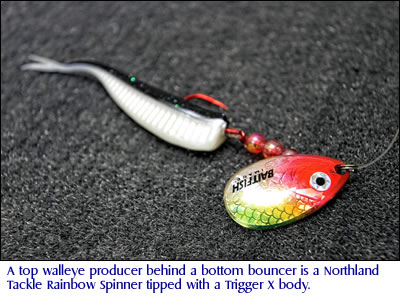 Most anglers tip harnesses with a whole crawler but there is a lot of room for experimenting. Obviously, there are times when tipping the spinner with a minnow or leach works well. When you are really dialed into the right spot, it doesn't matter what you have on the back of the spinner. The reality is however that there are times when one bait will out produce the other. I have gotten to the point where live bait is an absolute last resort as I am typically much more effective if I tip the spinner with a Trigger X worm, leech or fluke. Soft plastic options like Trigger X can really shine because these baits track through the water true and are much more durable than any live bait. The reality is that walleyes probably hold on to Trigger X as long as live bait anyways. There are a lot of good options out there for tipping spinners but the Trigger X is the most effective. Just try it if you don't believe me. Once you use it, you will be hooked.

Also, using soft plastics instead of live bait for tipping harnesses is a confidence hurdle for some anglers. Some anglers have a hard time letting go of live bait and the reality is that live bait is always something to try when nothing else is working. However, if you are missing fish or not getting bit with the soft plastics, fish faster and hold on. Come mid to late summer, many anglers make the mistake of not fishing this set up fast enough. We often find that we get bit more often and hook up more when we are pulling harnesses anywhere from a mile and a half to over two miles per hour. Don't drop the rod tip back or feed the fish line, just surge and speed up. I often swing the bow of the boat away from the fish with the electric trolling motor to load up the rod even more and the fish just seem to take the bait that much better. For dragging bottom bouncers like this behind the boat where it is critical that the rod loads up to hook the fish, we actually designed a seven foot bait casting rod that has the perfect sensitivity, action and load point for this style of fishing. This particular rod is called the Jason Mitchell Elite Series JMSC70MLF.

There is no rubber stamp with walleye fishing where something always works in a particular situation and there are always times where you have to change what you are doing but I am confident that some of the mentality and techniques described above will help you catch a lot more walleyes this summer at some point.