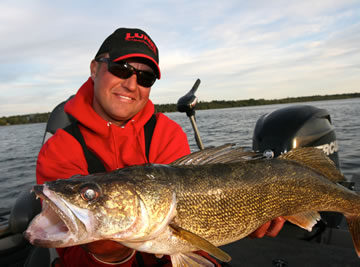 One of the most overused terms in fishing today is "reaction strike." It seems like every time you turn around, someone else is talking about a scenario where a fish has been magically stimulated to bite. The truth, of course, is that fish strike baits for one primary reason-to eat. As anglers, we're in the persuasion business-doing things with presentation that allure fish to bite when they otherwise wouldn't. It's actually a pretty apt description for the role of a lively baitfish.

I can make an awfully convincing case for the supreme reaction strike triggering power of a live minnow, such as a meaty golden shiner or a creek chub, for any fish species, including bass and trout. But for now, I've mainly got walleyes on the brain-a fish that's so fond of eating live minnows that you sometimes wonder why anglers neglect to use them throughout the openwater season. We're talking about a critter so delectable that it actually fishes itself. Get one swimming and darting in front of a big marble eyed titan and let the minnow take over from there.

Live minnows exhibit two critical characteristics that make them totally inimitable among other baits or lures: organic random movement and instinctive flight response. In the presence of predators, live baitfish use a set of natural, random escape maneuvers. These moves represent the most effective strike triggers in existence. Often, walleyes (and other species) simply will not ingest a bait until they've examined it for extended periods. Without all the little shakes, twitches and retreat signals performed by a living and breathing baitfish, you simply will not get bit.

Which brings us back to the currently hallowed "reaction strike." Assume for a moment that a true reaction strike is one that occurs only because a fish has been stimulated or just plain provoked to swallow something it wouldn't otherwise bite. You can do this at times with a crankbait-adding jolts of speed while trolling or when a Rapala crankbait caroms off a rock or stump. You can use other lures to entice strikes, too-jigging spoons that descend with partially random actions, or jig-softbait combos ripped and suddenly paused at arbitrary intervals. Even a lively leech writhing on a jighead beneath a float often draws a powerful reactionary response from otherwise uninterested 'eyes. 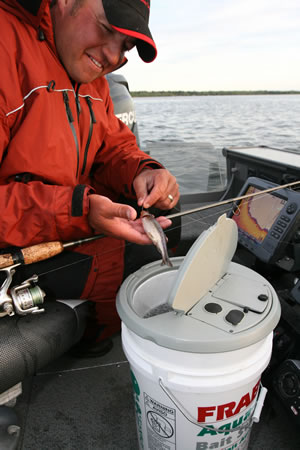 Yet among big walleyes, nothing-absolutely nothing-stirs up craven desires to chew like a spirited, tail-kicking baitfish. I gotta tell you that much of my profession revolves around big walleyes. Not just because my clients and I like to catch them, but rather it's because I often need one or two big ones for a tournament kicker or a promotional photo. When there's real pressure to produce a horse, I nearly always find myself reaching into one of my aerated Frabill bait containers for a 6-inch creek chub or a mega golden shiner. Doesn't matter whether it's spring, summer, fall, or even if every other angler is using little jigs or whatever else. Big minnows get big bites.

When I buy a batch of mega minnows at the baitshop, questions and sideways glances from fellow patrons always amuse me. Mostly, they want to know 'what the heck I'm fishing for with those giant minnows?' Usually people don't even believe I'm offering them to walleyes, assuming instead that I must be after pike, catfish or even muskies. In spring and summer, most fishermen buy little "jig tipper" minnows-2 and 3-inch fatheads, shiners or chubs that they believe are more manageable for fussy walleyes. And even in the fall, when anglers finally start thinking about big minnows, I still usually have my pick of the litter in the bait tanks-mongo 6 to 8-inch creek and redtail chubs that others view as pike bait.

If only they could hop into my Lund in June, July or August. I'd hand them a rod and let them feel the thrill of these baits getting smashed by a big walleye. Almost nothing in fishing is so exciting as feeling a heavy fish rip yards of line from your spool. The anticipation of finally setting a hook into what will likely be a real heavyweight . . . it fires me up to think about it, even now.

There are a few tricks to presenting big minnows, of course, but success mostly boils down to precision boat control. Big walleyes often live and linger in select zones on structure. You've got to learn the art of the 'hover'; using your boat as part of the presentation to position your minnow in select fish zones for extended periods. Clearly, not all boats are created equal-it's a major reason why the top anglers in the biz have fished from Lunds for so many years-Al Lindner, my uncle Gary Roach, Mark Martin, Ted Takasaki and guides like Tom Neustrom. There are design elements engineered right into these vessels that make them superior platforms for presenting baits to walleyes. Things like IPS hulls and reverse chines aren't just fancy terms meant to impress people - they really do enhance your ride, stabilizing and slowing your drift in all conditions. And I love the fact that the big captain chair in my Pro-V feels like a throne, providing a comfortable place from which to feed hefty walleyes big minnows.

Go with simple rigging-sliding bullet sinker, an InvisaSwivel for line-twist management and neutral buoyancy, a 3 to 10-foot fluorocarbon leader and a snelled #2 VMC hook. Just nip the hookpoint into the bait's mouth and out through one of its nasal openings. This method does no harm to the minnow, which will reward you with unending tail-kicking, walleye alluring movements.

Rig one, and you'll learn a whole new meaning for the term "reaction strike."

Tony Roach
Tony Roach grew up in northern Minnesota where he has been a fishing professional for over a decade. He has guided on a wide variety of lakes including Mille Lacs, Winnibigoshish, Lake of the Woods, and many more! Roach, a professional walleye angler competes in tournaments across the Midwest. Tony offers a vast knowledge of multi-species fishing, on a wide variety of waters.
BITS & BITES
Advertise here