By Mitch Eagan - July 1, 2011
Behemoths may not come easy, but the devoted know beastly pike are worth the time

Sad but true, the northern pike often gets no justice. But it's only anglers that have deprived themselves of targeting trophy-size fish during the summer months that take up this preposterous position. While many anglers cast shoreward only and curse the hammer-handles for tearing up their terminal tackle, ardent Esox anglers probe the depths for giants, even though the time gaps between bites can sometimes be long.

Northerns in depth
Like any brute fish, northern pike prefer to spend a summer's day in cool water. During the months when beads of sweat build on an angler's brow, big bruisers often chill with bellies to the bottom. Here they sulk amongst structure in the dimly lit depths until prey swims by, and within a blink of an eye they dart out from the dark alleyways and sabotage the unsuspected. It's over before it started. 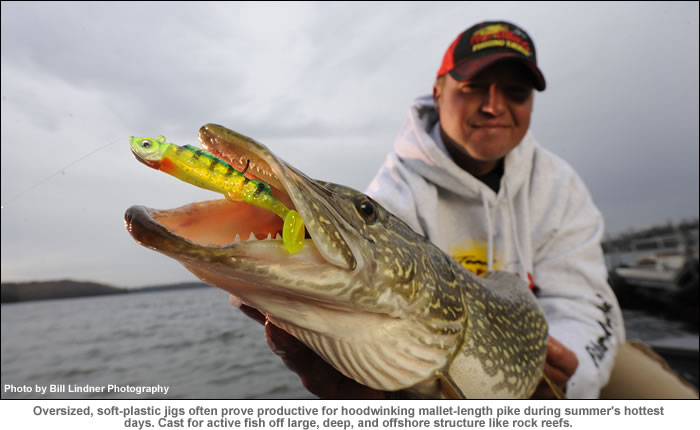 But gargantuan pike don't linger just anywhere in the heat of summer. And contrary to popular belief, they don't eat just anything. They have a fondness for a particular type of forage, and those select baitfish prefer specific types of structure.

"Northern pike aren't always the veracious eaters people think they are," said Todd Kalish, fisheries biologist with the Michigan Department of Natural Resources (DNR). "They prefer to eat soft-rayed fish. That's fish without spikes, like suckers, herring, shiners and shad, versus prickly walleyes, panfish or bass." According to data collected by the Wisconsin DNR, Kalish added, muskie and pike will feed on fish with poky pectorals if they have to, but these fish make up less than 5 percent of their diet. 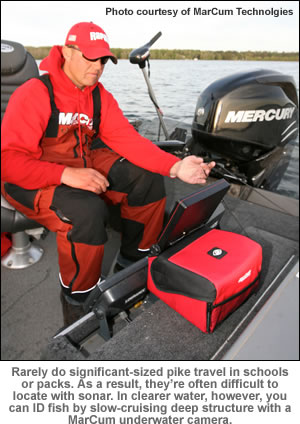 Search and ye shall find
Unlike walleyes and bass, big pike are loners. This is not to say there won't be several slinking on a key piece of structure, but they don't hunt in packs. More often than not, you won't mark even a pod of sows on your sonar. Lower the camera of a MarCum underwater viewing system in clear water, however, and you may spy one in the distance. And if you're lucky, curiosity will overwhelm the fish and you'll be looking camera-eye to fish-eye through the screen. Inquisitiveness is a trait pike are born with.

The key to locating deepwater pike finding their preferred forage. Schooling baitfish like herring, shad, and shiners appear on sonar as clearly as clouds over structure. You'll see suckers and shiners, too, but often they're hugging bottom, especially during daylight hours, and an underwater camera's the best way to confirm what species you're messing with. This is where the clarity and sharpness of a MarCum color underwater viewing system shines through. With a "Solar Intelligent Display" screen, it's easy to decipher the smallest details, even on a bright sunlit day.

Soft-rayed baitfish will utilize just about any kind of structure, be it weeds, wood or rock. It's all good. Structure on structure is better; that's the aforementioned in conjunction with points, humps, and saddles between islands or neck down areas between main-lake basins. Watch the wind; concentrate on structure that's getting whacked with waves as the current has its way with baitfishh. Scurrying forage gets predators excited and snapping.

As for how deep to search for baitfish, that depends on the waterway. In the pot-hole, tannic-stained waters of the north (classified as mesotrophic, semi-clear middle-aged lakes with some silt), 20 to 30 feet may be plenty. In lakes where this the maximum depth range, you might have to look shallower as there could be oxygen depletion in the dark depths during the heat of summer. In the ultra-deep waters of the Great Lakes or oligotrophic inland lakes (young, deep, clear, cold), you can start your search for baitfish at the aforementioned depth and then go deeper from there.

Another trend recently popularized by Frabill Pro Staff and Freshwater Fishing Hall of Famer Tom Neustrom is focusing on deep thermoclines on natural lakes. Here, above the oxygen-free-zone, baitfish gather over the fathoms and giant pike - as well as wide shouldered walleyes - will follow like contracted assassins, rubbing out a fish or two as appetites dictate. 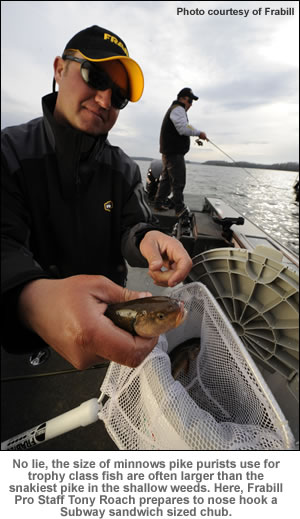 Tempting trophies
Two methods come to mind for targeting trophy pike in deep water: Jigging and live bait rigging. The former will trip the trigger of pike actively feeding, while a minnow or sucker on a live bait rig often flips pike in wearier moods. In waters where you can fish two or more lines, these time-tested- tactics can be used simultaneously.

Vertical jigging with 3/4-ounce or larger metal spoon is a proven technique, as is casting and jigging a 1/2-ounce or heavier bucktail or curly-tail grub - either at least 4 to 5 inches in length. Lift a vertical spoon quickly, and then let it flutter down to the bottom. Strikes usually occur on the drop. When casting a spoon, lift the rod tip to swim the bait, and then drop it while reeling in slack, allowing the lure to pendulum towards bottom. Again, pike will normally strike as the sacrifice falls.

Tie on a nickel-titanium leader to keep bite-offs at bay. The techy alloy not only curbs tooth nicks and broken line, but also offers some stretch and acts like a shocks absorber. A 1-foot section of 25-pound-test Knot-2-Kinky is limber enough to promote lure action, yet strong enough to subdue huge pike.

Attach the leader to a 15- to 20-pound-test superline, such as Sufix 832, which has minimal stretch and a tight line diameter for slicing deepwater. Make the connection with a robust swivel. Made from a fluorocarbon-based material, the ultra-clear, ultra-durable InvisaSwivel virtually disappears in the water. And self-lubricating when wet, it will keep your line twist free. The same swivel in the new Nuclear Chartreuse or Bloody Red colors are actually designed to attract additional attention to our bait, not vanish beneath the surface.

Even though livebait might 'sucker' the more lethargic pike, avoid lifeless minnows. Shiners and suckers should be kept in well-aerated water, like that produced by a Frabill Min-02-Life Personal Bait station or Min-02-Life Aerated Magnum Bucket. Properly chilled and oxygenated, a minnow lives longer above the surface and struggles more on the hook once dipped.

Minnows, like suckers or chubs, should be just nipped through the lips to minimize injury and maximize mobility. A 3-foot leader of 30-pound-test fluorocarbon, tied to the brightly-colored InvisaSwivel, which is holding back a 3/8- to 1/2-ounce slip-sinker is all that's needed to create a live bait rig for fooling pike.

Don't be one of those anglers casting shoreward, cursing the hammer-handles tearing up terminal tackle; instead be that ardent Esox angler probing the depths for giants. Find the baitfish utilizing structure on structure, hit the wavy side, and jig and deploy a lively minnow or sucker. While it's true big pike don't come easy, one torpedo strike will validate the time you invested.