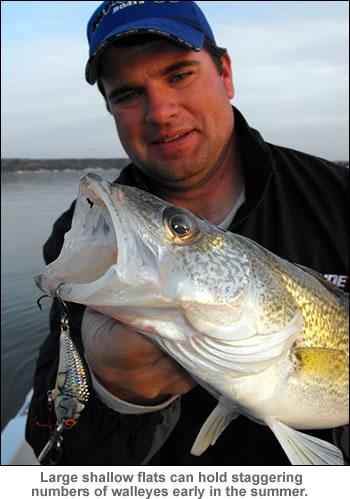 If there is one spot, one pattern that is capable of producing a lot of walleyes for us each season early in the summer, my vote would go to large shallow flats that protrude to deep water. Shallow is relative along with deep but what we are looking for are flats that are generally at least one acre or sometimes several hundred acres that might be in anywhere from five to fifteen feet of water. These flats are generally more productive if they drop off into deep water whether this deeper water is a deep basin, old river channel or trough. The bigger the flat, the more obvious the spot and these flats are often no secret on the map. While small, obscure flats might not get as much attention, the reality is that the larger spots often are capable of holding more fish.

These flats often warm up and typically on these shallower flats that lie in less than fifteen feet of water, there is often some emerging weed growth of some type. Depending on bottom composition and water clarity, this weed growth might include chara, sand grass or carpet weed. Typically, the shallower flats consist of sand, gravel or even scattered rock on many natural lakes and reservoirs while deeper flats and or basin areas are typically softer consisting of silt, clay or muck. Often but not always, these productive areas are connected or protrude from the shoreline.

Trolling crankbaits is so incredibly effective on these flats for a variety of reasons. Because crankbaits can be trolled at a set depth determined by the amount of line behind the boat, these lures can be trolled at an exact depth that doesn't vary if the boat speeds up or slows down. This keeps the lure working above the emerging weed growth on the bottom. Crankbaits also have strong flash and water displacement so fish can feel and see these lures from considerable distances. For pulling in fish or covering water efficiently on flats, crankbaits are a pretty good bet.

There are always exceptions but much of our success early in season on inland natural lakes and reservoirs happens on shallow running minnow baits or small shad profiled baits. Early in the summer when water temperature is just starting to climb and trees are just starting to leaf up, small shad profiled baits in particular seem to work incredibly well on many lakes and reservoirs. Part of the effectiveness of small shad profiled crankbaits come early summer is the fact that many fisheries blow up with young of the year fish hatches. These forage options might include yellow perch, gizzard shad, drum, white bass, crappie or bluegill fingerlings. Many fisheries have a staple fish species that provides a stable food source each season but some reservoir systems in particular have a tremendous number of fish species along with drastically changing habitat from one year to the next. As water levels fluctuate and the habitat changes, some species might spike periodically severely altering walleye fishing patterns. Even on fisheries with renowned forage bases of shad, perch, smelt or some other prolific bait fish, a stellar hatch of another species can tilt and alter the patterns drastically from one year to the next.

The beauty of these shallow flats (come early summer) is that many young of the year fish seem to show up on these locations. These flats warm up fast and the combination of sand and emerging new weed growth just comes alive with life. Even on the same lake on different years, the forage abundance might vary but there are usually schools of some type of fish that a walleye will eat. 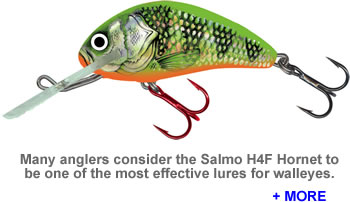 Because these flats typically hold a staggering number of young of the year fish, there is no guessing that walleyes will be relating to this forage. Because there might be so much forage, this over abundance in forage can also affect the bite. Crankbaits can be a good counter punch when walleyes have plenty to eat because these lures will often trigger reaction strikes.

There are many good crankbaits on the market that catch a lot of fish but by far one of the deadliest lures we have used for this kind of scenario described above is the tiny H4F Salmo Hornet. This little hand tuned crankbait has a tremendous vibration and will reach depths of nine feet on super line. Because the lure is so small, many anglers make the mistake of assuming that walleyes (especially big walleyes) won't hit such a small lure. Early in the summer, however, fish are keying on young of the year fish that are about the size of a quarter. The H4F Hornet is the right size and the vibration and action is really noticeable. This lure flat out catches fish.

In fact I mention this because if there would be one tactic that is likely to keep you on the edge of your seat come early summer, motor through these big shallow flats with a Salmo Hornet and run the lure about two feet off the bottom above the weed growth and hang on. This is a high probability technique where chances are good that you will be reeling in walleye.