Lighter Side of Jigs 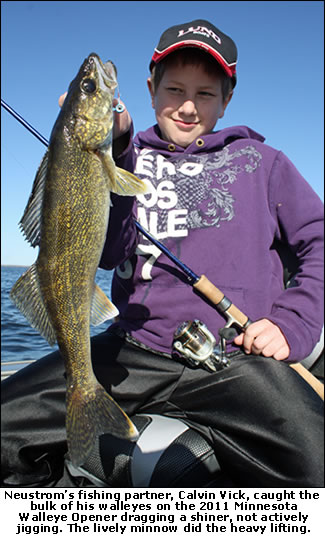 It happened again, just like the last Minnesota Walleye Opener, and one before that. We were dosie-doe-ing amongst dozens of other boats, all square dancing over a giant piece of structure and dipping jigs. Not bragging, but like last time and the time before that, our Lund's catch rate trumped the dance floor. Soon, other boats orbited us like moons circling a planet. Elbow room tightened, but we continued hauling in walleye after walleye while the invaders struggled to scoop up our scraps.

The 'tail-pipers' appeared to be using similar jigs draped with live shiners, too. But still, the barrel of our landing net stayed hot while they drifted by fishless - the difference not being with what they were using but rather how they presented it.

Jigging is an interpretive act. Meaning, you pitch it out there, begin with a simple lift, fall, and retrieve action, and then paying acute attention to how fish respond and then react accordingly. In this instance, experimentation was simple, because everyone knew walleyes were there…and feeding. But what most anglers lacked was the intuitiveness and flexibility to change jigging motions and cadences until finding that perfect plate presentation.

Typically, anglers fish too heavy of jigs. We drifted and backtrolled in 16 to 18 feet of water, dunking only 1/8 ounce jigs. In fact, when the wind died, we downsized to weensy 1/16 ounce jigs. That degree of lightness puts control in your hands, not gravity's. Upping to a ¼ or 3/8 ounce jig would have forced us to fish nearer the boat, perhaps directly below, and not been able to tender that loft and glide motion that was the order of the day.

The walleyes wanted it away from the boat and sailing softly, not banging the bottom. Using smaller jigs not only caters to the preferences of inactive or cold water walleyes, but also teaches you how to fish small and with total control. Heavy jigs write their own rules. Light jigs make you the boss.

Other parts of the formula include jig and boat speed. So many anglers fish too fast. Referencing the Walleye Opener, more often than not, boats sped past us, rods snapping like bullwhips. Those guys seldom got bit. And if they did, it was a nip and a miss, maybe never knowing something kissed the bait until they later inspected the gashes on the back of the minnow - sure signs of fanning on a walleye.

Slow down, fish with patience, especially if you're on top of walleyes. Generally speaking, in depths over 12 to 15 feet, I won't even stop and drop until I see marks on the Humminbird. There are times when you need to search with a jig, days when fish are affixed to the bottom and scarcely traceable. But if they're up and feeding, those beautiful black thumbnails will be obvious on the screen.

These premises pertain to casting as well. When it really flattens out, I prefer pitching jigs over slow-trolling. Or, if I'm slow-trolling a jig off the stern, whoever's occupying the bow or mid-ship will cast and retrieve a jig, widening our total area of coverage. The caster is also able to better manipulate jig speed and test various motions, like dragging and popping.

Most often, though, the caster is successful imparting that same methodical gliding action. In fact, if the minnow is hooked lightly, through the lips only, it becomes an active member of the drama. Just let the jig drag around, minnow struggling on the hook, and occasionally letting the jig settle on the bottom. No lie, done with patience, a single cast and retrieve can take a full minute, even two.

Oftentimes, actual bites don't materialize like the classic 'strike', a jarring jerk on the rod. Like a bass squeals away with a soft plastic bait, a walleye will bite down on the minnow and start swimming off as if he'd scored an easy meal. You'll feel a gradual loading of the rod tip. Paying close visual attention to the line, you might see it take an irregular path with zero pressure on the rod at all.

About any jig with a piercing hook does the job, but I do have preferences. Northland Fishing Tackle's classic Fire-Ball, with its short upturned shank, is a walleye's worst nightmare. The simpler, less expensive Northland Gumball Jig is the answer in spots known for hammer-handle pike attacks, as you can blow through a lot of lead. Lately, a lot of anglers are having success with VMC's Neon Moon Eye jig. It, too, features a surgically sharp hook. But what really gives the Neon Moon Eye jig that added flair are oversized, fishlike eyeballs. Even a small minnow yields a juicier appearance because of the bulbous, realistic peepers. 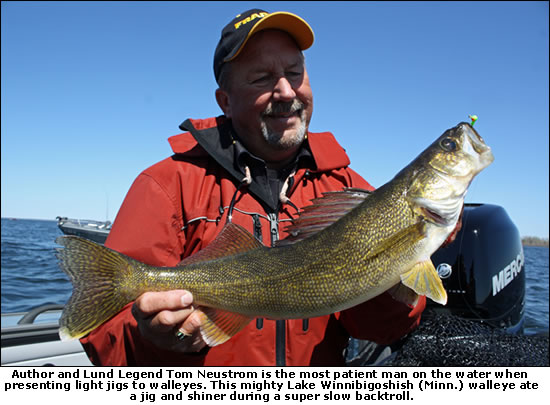 The best periods to employ this subtler, finesse approach to jigging are in the late spring, early summer, and then again in the fall. During those periods, baitfish - young perch, shiners and shad - range shallower. In search mode, start exploring that 6 to 8 foot zone and gradually work deeper. Areas featuring rocks and weeds should be explored first. Another trick is fishing where you see loons or other minnow-eating waterfowl diving and drinking water to swallow. Nine gives you ten that they're feasting on baitfish. Shorelines absorbing onshore winds are generally more productive as well, especially if they've been barraged for several days in a row. The pounding waves drive the entire food-chain toward shore.

Boat control begins with the watercraft itself. Lunds are famous for their ability to track linearly, wind not throwing your boat off-course, which is common and frustrating with the inferior keels of other boat brands. The hulls of Lund Boats are engineered for angler control and wave management. Focus fishing, not getting stressed out trying to get the boat to behave.

In the end, a system is only as good as the weakest link - fishing line included. Invariably, I spool with Sufix 832 in 6 lb. strength, 2 lb. diameter. The Goretex based superline casts light jigs effortlessly. Also, the narrower diameter cuts water cleanly to maintain superior sensitivity between you and the jig.

A long 7-foot, fast to medium-fast rod affords the lengthiest casts with light tackle. The extra inches and softer tip also allow a walleye to get a hold of the jig before feeling any resistance. Once the tip loads, offer the fish a little more tip, and then sweep-set. Power hooksets are for amberjack and barracudas, not walleyes. Rod brands worthy of consideration are Daiwa, Dobbins and the Eyecon series from St. Croix.

Lastly, if you run into an unbearable wind, but know there are fish in the midst, don't be afraid to anchor. Let out rope every so often to reposition over fresh terrain. Literally, you can effectively carpet bomb a piece of water for hours without ever weighing anchor.

Next time you reach for a jig, put it back. Lighten up one size from what habit or instincts tell you. With patience, practice and a little artistry, you'll control the bite instead of it controlling you.