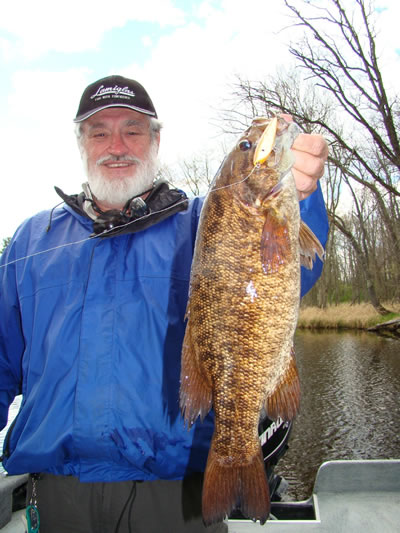 The cool dry summer we experienced last season made for some unpredictable fishing While we did catch lots of smallmouth on many days the bite was light and called for finesse presentations. One would not think that such conditions would make for a great topwater bite. While it was not a great year for topwater fishing on the river, it was a good year. As usual anglers had to adjust and know when to take advantage of the windows that were open to the topwater bite.

Although the topwater bite was sporadic last summer, when the bite was on it was fantastic. July was good but the best fishing occurred from mid August through mid September. The topwater bite last summer and early fall might not have produced large numbers of smallmouth but my clients and I caught and released many 18 inch plus smallmouth. A typical pattern was to use a wacky worm to locate smallmouth then switch to a topwater bait and catch the big fish of the day. Over the years I've learned that the big fish of the day can't pass up a properly placed topwater bait. The key work is properly placed bait, and that can mean finesse presentations for topwater smallmouth.

All topwater baits are not the same; some have a greater tendency to trigger strikes from big smallmouth. One such bait is the Hubs Chub made by HC Baits. The Hubs Chub has a rear prop but the front of the bait is beveled, making it a cross between popping bait and a prop bait. Its vertical presentation attracts huge smallmouth that refuse other surface baits. The explosive surface attacks that you'll experience with this lure are matched by no other surface bait on the market. The three inch bait is ideal for river smallmouth. One day last August while fishing with two clients we caught over 100 smallmouth using the Hubs Chub. In fact I had several days last summer when we caught over 50 fish per day on the Hubs Chub.

I have used the Hubs Chub for over 30 years and have kept it a secret, especially on the Menominee River. The problem was that I thought they were out of production, and since I only had a few baits left, I would use them only on a special occasion. I sure wasn't going to let one of my client toss the bait into a 30 foot pine tree. Then I discovered that they are readily available and manufactured in Pennsylvania so I can let my secret out. HC Baits is in the process of making the Hubs Chub in new colors and they have improved the original bait. www.hcbaits.com The best colors are Crawdad, Bone Shad, Clear, Tennessee Shad and Chrome/Chart. The Hubs Chub will out-catch any other surface bait 3 to 1. Do not Fish a River without one!

Many anglers think color is not important when using topwater bait. When using bait like the Hubs Chub which has a vertical presentation, color can act as another trigger. The Bone Shad and clear colors were the top colors last year. The chrome/chartreuse color patterns has reflectivity that mimics baitfish and will cause a neutral smallmouth to go on a feeding frenzy. Many times a smallmouth will not see a painted surface bait but they will quickly zero in on a bait with a high degree of reflectivity.

While I primarily use the three inch bait, if you are in big fish water and the conditions are right the four inch Hubs Chub can be deadly. It works best right before

"I have used the Hubs Chub for over 30 years and have kept it a secret, especially on the Menominee River..."
a front or at dusk. The four inch bait is a great bait for big largemouth bass, northern pike and muskies.

Last year the Yo-Zuri 3D Popper continued to produce lots of smallmouth on the river. The 3D Popper also has a vertical presentation that will entice a strike from a big cagey smallmouth. The Color patterns of the 3D popper have a translucent finish that resembles baitfish in the water. The internal SS Balls will cause the bait to rattle at the slightest movement while providing longer more accurate cast. One of my favorite tactics is to just shake my rod and let the 3D popper tilt ever so slightly. This technique will produce savage strike from big smallmouth. The Mylar feathered rear treble hook is another trigger mechanism. My favorite colors are Tennessee Shad, natural Pearl Blue and Gold/Black.

With a combination of the Hubs Chub prop bait and the Yo-Zuri 3D popper you can cover just about any topwater situation. One good pattern is for one angler to toss the Hubs Chub and another to use the 3D popper. Even if one angler starts catching fish on one bait, the other should not change. Over the years I have observed that each fish can react differently to a bait. By using baits with different action you will catch more fish. A smallmouth may pass up one bait and crush another.

Putting together all the pieces of the smallmouth bite pattern, using proven topwater baits and choosing the right combination of rod and line for the situation will definitely increase your topwater success. Use a medium or medium heavy rod and if you are using casting rod spool your reel with braided line. When using the three inch Hubs Chub I prefer a spinning rod and spool my reel with Yo-Zuri Hybrid Ultra Soft Line.

For more information on either the Hubs Chub or 3D Popper, or to book a day of topwater fishing, go to my website BigSmallmouthBass.com. You can also order a copy of one of my books. "Catching Big Smallmouth", "It's All In a Day's Work, or " Northwoods Walleye". You can also purchase an E-Book at Amazon.com.