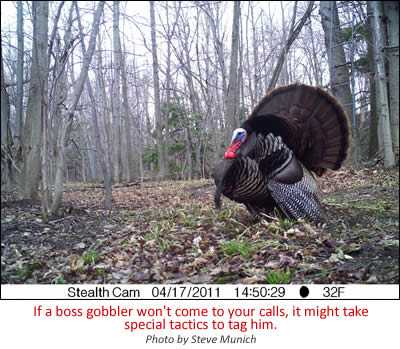 Nothing gets a turkey hunter's heart a-thumpin' like a booming gobble just yards away. Let that tom gobble incessantly without coming any closer, though, and the warm rush slowly turns to frustration.

Spend enough time in the turkey woods, and sooner or later you'll encounter a trash-talking tom that comes so tantalizingly close, only to hang up, retreat or fall silent. Such a bird is usually a boss tom, an old, wary bird whose spurs have turned to hooks because he doesn't come trotting to the first box call of spring.

A turkey like that will teach you a lesson in patience, but when nothing you throw at him brings him to the gun, you can sometimes outflank him and put him in the bag.

Lenny Heisz, the man from Crawford County who taught me how to hunt turkeys, used to say, "A turkey has nowhere to go and all day to get there."

What Lenny meant was that a turkey's concept of time is different from yours and mine. Toms often have somewhere very definite to go, but it's often not where we want them to go, and they do it at their own pace. If a tom won't come to your set-up, you might be able to outflank him and put him in the bag. Since the early season is already behind us, let's look at tactics for mid- and late-season hunting.

Mid-season tactic
Once breeding begins and hens start laying eggs, a boss tom knows he's going to get some action. He'll fly down from the roost, wander to his strut zone and spend most of the day there, strutting and gobbling his head off to attract hens that are ready to breed.
"A turkey has nowhere to go and all day to get there..."
It's tough to call a gobbler off his strut zone, which is usually an open spot in a field, along a logging road or on a bluff, where he can be seen and heard from a distance. Your best bet is to locate a strut zone, then set up there before sunrise the next morning up and be his first and last date of the day.

If you happen upon a gobbler on a strut zone early enough in the day, you can sometimes flush him off it, set up and wait for him to return. He may return and resume strutting and gobbling in a few minutes, or he may wait an hour or more, but you are more likely to intercept him as he returns to a place where he is used to meeting hens than you are to run into him somewhere else by blind luck.

Late-season tactic
Later in the season, most hens are nesting and many younger, dumber toms are resting comfortably in someone's freezer. A surviving boss tom will still be looking for hens to breed. He may move from one strut zone to another, gobbling as he goes and when he gets there. He may also make the rounds of nesting hens to see if one of them needs attention.

One tactic that often works on such "trollers" is to get in their way. A wandering tom that gobbles as he walks gives away his position. Toms usually travel easy routes: logging roads, field edges, ridge tops and the like. If you hear him moving along such a route, move quickly to set up well ahead of him along that route. Rather than call, just wait him out as long as he keeps walking and talking. He may walk right into your lap. 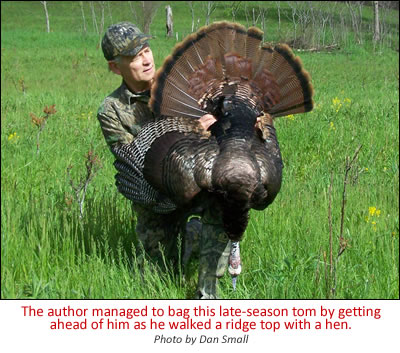 The hung-up gobbler
Early or late in the season, a gobbler will sometimes hang up just out of sight or out of range, where he double-gobbles at every yelp but refuses to budge. These trash-talkers are the most frustrating birds of all. Often, you don't know you're dealing with one until he has pinned you down and fired salvo after salvo of gobbles for a half-hour or more.

If none of those tactics work, sit quietly. Eventually, he may walk off, either with another hen or because you wouldn't come to him. Now you've got a chance to outflank him.

Just because he didn't come in doesn't mean he wasn't interested. He was expecting you to come to him. If you can determine his direction of travel, you may get another crack at him.

If he leaves the area, try to keep him gobbling, using hen yelps or a locator call, such as an owl hoot or crow call. If he keeps gobbling as he leaves, when he is far enough away to risk moving, try to loop around ahead of him and cut him off. The better you know the terrain, the more likely you will be able to get ahead of him. If you do get ahead of him, set up along his route and wait.

If he shuts up, throw a crow or owl call at him to get him to sound off again. Don't use a hen call, or he may just hang up again and you're right back where you started. You might play leapfrog two or three times before you run out of land, time or patience, but keep at it.

The harder you have to work to outsmart him, the sweeter the taste of success when his head finally appears over your shotgun bead at 30 paces.