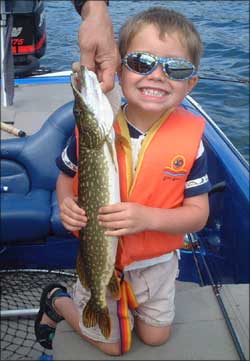 O.K., it's August now, you're sitting at the kitchen table, drinking a cup of coffee with the "Ol Spousal Unit" and wondering "What in the heck happened to the summer?" Like I said, it's August, the kids will be going back to school soon, that's evident by the sales flyers in the newspaper, advertising "Back to School" specials already. So, what does this have to do with fishing? EVERYTHING!!!

I've heard all the answers before. You were too busy, they were too busy, there wasn't enough time, I don't want to fish for bluegills and perch, there isn't enough room in the boat, it's a hassle taking little kids (BAD answer), and probably the lamest of all, "They're too little, I'll take them when they're older."

Well, I'm here to tell you right now, all of those answers won't cut it with me, or anyone else for that matter. There's ways to get around each and every one of these excuses, I know, I've said them all and found ways to combat every one of them as well. I'm a father of four girls and one boy, don't tell me that kids can't or won't fish, that doesn't wash.

Either you or the kids are too busy? Sit down and schedule some time to go fishing. It doesn't have to be a big expedition for a long time for far away. Some of my fondest memories of fishing with my dad were in a rented rowboat on Pike Lake, not far from my Milwaukee childhood home. Yup, we fished for whatever bit, 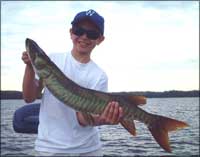 mostly perch and bluegills, but you know what? Those were some fine trophies and even better memories. We'd slip away occasionally on a Sunday morning, I remember those days, over 3 decades ago, me rowing across the lake, weaving like a drunken sailor. I'm sure that we could have had hours more fishing time, but it meant a lot to me to be able to row the boat. I'm not certain but I'll bet that my dad wanted to take the oars away from me and just get out there, but he knew, he really knew how much it meant to me.

We'd talk about anything and everything, I'd ask questions, dad would answer. Man, that man was great, to a 10 year old, he knew it all. Somehow, things that we never could talk about at home came tumbling out when we were in that waterside confessional. Water has that effect on just about everything. Problems that seemed impossible, somehow became less important and more manageable after a morning of fishing with dad. You know what? It worked 30 years ago and it still works today. Even in this highly technical world of computer chips, sound bites and music videos, wind, water and a boat still work their magic on everyone's soul.

Is it a hassle taking kids fishing? It depends on your outlook I suppose. If you're going to be "Super Serious Joe Tournament Angler" and spend your entire day firing pinpoint casts under boat docks or Carolina rigging deep water rock piles for post frontal bass, then maybe it is more than most kids can handle. But don't sell them short. Most kids, if you explain to them what's going on, can and do handle all but the most sophisticated angling methods quite well. Again, I know, I've taught many kids finesse methods of fishing. The only bad thing about this is sometimes, they'll show you up! Sure, you have to lighten up a little when there's "little people" in the boat, but you can still be somewhat serious, it doesn't have to be jerking stunted panfish one after another all the time. Kids are tougher than you'd think, let them try.

It helps to pack some things that you might not normally pack for a fishing trip. Snack foods, fruit juice, crayons and a coloring book used to go with me all the time. This way, when they get a little tired and hungry, or if the fishing is really slow, there's something to keep them occupied. I suppose that today, you could substitute a GameBoy for the coloring book.

I know that there's been a lot of articles written about taking kids fishing. All the "Experts" tell you to go to a lake that has lots of bluegills or perch, something that's going to give them a lot of action. Well, that's true I suppose. If all you're going to do is sit and watch a bobber, then you do need a lot of action. But I'm here to propose something different.

How about taking them to a lake that is known as an action lake for muskies? Or a lake that is chock full of northern pike and bass? If kids today are anything like I was waaay back in the dark ages of my childhood, they love to cast and reel. That's another thing that I remember my dad telling me, "Keep that line still, how's a fish going to eat the bait if they can't catch it?"

Teach them to cast and reel. I've taught kids as young as 7 or 8 to cast a spinning rod AND a baitcasting rod. Now, here's the fun part for them, tie on a lure and let them have at it. Give them an idea of how the lure is supposed to work and let them go. You'd be surprised at how many variations on a retrieve that kids come up with and how many times they work! Floating lures and kids work great. Rapalas are almost impossible to fish wrong, kids will jerk, twitch, pop, rip and crank these back at warp speed. Guess what, all of these retrieves catch fish! Topwater lures like a ChugBug or the old Devil's Horse prop bait are others that are impossible to do wrong. A lure that is great, especially if you're worried that you'll end up in some emergency room wearing some new body piercing jewelry is the Zoom Fluke worm. This 6" soft plastic lure is designed to be rigged weedless, and snagless using a single large worm hook. It can be bounced off the back of your head with a reasonable amount of safety. Again, as long as this lure is in the water, it's almost impossible to fish wrong.

Give a kid any one of these lures and they'll stay busy for hours, casting and working the lures, catching more fish than you'd imagine. And, they'll be developing a love for fishing, spending time with you and filling up their memory banks with lots and lots of good stuff.

Now, all of this sounds pretty good, but how young is too young? Well, recently, I guided a dad and his 11 year old...Muskie fishing! You know what? While we didn't catch a legal muskie that day, we did boat 4 muskies, 3 northern pike and a largemouth bass. Guess who landed the 4 muskies, one of the northerns and the largemouth? Guess who also had never fished with a baitcaster before that day? 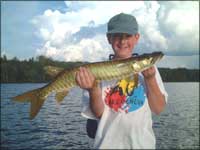 Yeah, O.K., 11 year old Nat was pretty old I guess. Well, how about 10 years old, is that too young for muskies? Nahh, I gave this little lunker hunter a crash course in Baitcasting 101, tied on a Crane Bait and watched him fire away. Poor Zack, he didn't do too well, he only boated 3 muskies that day, but somehow, seeing the look on his face as he held up his trophies, I don't think he minded one bit.

Well then, if 10 is an acceptable age, what it too young? Believe it or not, I had the pleasure of taking a friend and his 2 sons out, ages 5 and 3. "Wait a minute, you didn't take these guys muskie fishing?" Yup, we sure did. This is EXACTLY what I'm talking about. Kids aren't too young if you make adjustments to your strategy. I knew that we wouldn't be out all day, beating the water to a froth, I knew that and expected to be out just a couple hours.

So, when I told John to meet me at my house, I didn't plan a long day and didn't plan to get out too early. We were on the water by 10:00 a.m.. These were the youngest "Clients" that I've ever taken out for toothy critters so definite adjustments to tactics were in order. I figured that Sam, the older of the two could handle reeling. So I put on a TopWalker, a top water bait that has minimal resistance when reeling. I'd fire as long of a cast as I could and hand the rod over to Sam, he'd crank it in.

His younger brother Adam presented a larger challenge. What can you do with a 3 year old? I tied on a heavy duty jig and threaded an 8" twister tail on. Setting the drag a little lighter than I usually do, I let out about 5 feet of line and showed him how to jig the twister tail up and down. He really liked how the lure fluttered in the water and became quite proficient at jigging. For a 3 year old, he actually kept at it for quite some time, far longer than I expected him to.

The boys, being as young as they were, would get bored from time to time. Luckily, my boat is large enough that they were able to spend a bit of time exploring, popping open compartments, examining this, that and the other thing, eating graham crackers and drinking BugJuice. But, they'd keep coming back to fishing, Sam would come up on the front deck with me and I'd fire out some more casts for him to retrieve. 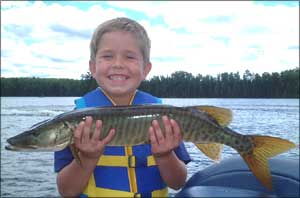 While they didn't have any strikes, they did get to fight some fish. I hooked a couple of northern pike and would hand the rod to one of the boys. Watching them struggle with an 18" pike was fun. Sam also got to land his first muskie, at age 5. Somehow, looking at him, I don't think he was bored. Will they remember this day? I think so, I hope so, I know that John will remember this day with his sons for a long, long time.

So, while it's still summer, put off mowing the lawn, the garage can be cleaned some other time, TURN THE TV OFF and go fishing. Most everything else can wait, but your kids won't. So do yourself and them a favor and make some memories. It won't be long and they'll be grown and gone, wouldn't it be great to know that they'll be taking their kids fishing too?

Oh yeah, I'm sure that you're wondering what the heck the title of this article "Too Short" has to do with this?? Everything! Are your kids too short to go fishing? NO! Is time too short to put this off? HECK YES! So what are you waiting for? Go hunt those kids down and tell them "Hey guys, we're going fishing!!"

So, until next time, See Ya,