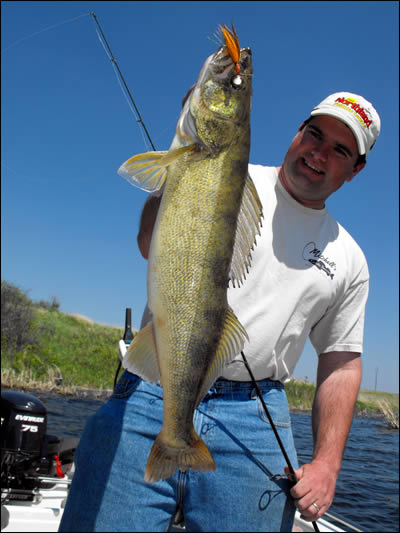 There is a general rule of thumb that fish are often located in shallow water during the spring and fish progressively move deeper as the year progresses. There is often some merit to this general rule of thumb but remember that there are always factors that can change or alter this generic migration. Weeds for example may hold walleyes shallow well into the open water season. Wind or rising water can also keep fish shallow. Every body of water offers a different twist and each year can even be different on the same body of water. Often as anglers, we get conditioned to expect a specific pattern and if the pattern doesn't materialize, we beat the dead horse. Confidence when fishing dictates much of our success and can also fuel failure if we can't switch gears and make adjustments. When fish should be shallow early in the season, we might have a difficult time making the mental adjustment to look deep when the shallow water bites aren't happening.

On many fisheries across the upper Midwest, most of the activity is going to happen in shallow water early in the season particularly on reservoirs and natural lakes. There are a few factors or conditions however that can push fish deep and being able to recognize those factors and adapt can make you a much better angler. Remember that every lake is different with different characteristics, structure, water clarity and forage. As a guide, I had the opportunity to spend several days on the water in a row (for several years) and this time on the water offered a great education on how conditions can change.

Most of the time on Devils Lake, North Dakota where I spent my career guiding, most of the fish were in less than ten feet of water during the month of May. The problem arose when those fish weren't where they should be most of the time. There are times where fish are ahead of schedule with their traditional movements into deeper water or away from shore towards more isolated offshore structure. There are also times where conditions momentarily push fish deep or out. The most common factor that can really shake up traditional spots and locations is unstable weather.

Some fish movements were really noticeable where for example we might be catching fish shallow along a particular shoreline for a few days and then adverse weather rolled in and the bite shut down. Often the first step when trying to find another bite after the ace in the hole has dried up is repeating the same pattern somewhere else. The hard part as an angler is forcing yourself to try a different pattern but if you eliminate half a dozen good spots and there is no activity, it is time to make a change. Flipping that switch and making major adjustments while there is still time left in the day really does separate the great anglers from the good anglers.

Before making a major adjustment however, fish through similar good spots where you know you gave the spots justice and if you are fishing for walleyes, let other fish species indicate exactly what is happening. If you are a walleye angler, non targeted or incidental fish of other species give you a lot of information. If you are still catching northern pike, bass, drum and other species shallow… give the location more time, stay close and let the pieces fall together. When you can't catch anything with fins which often accompanies a crash in water temperature or dirtier water created by really strong winds or a severe front, pull the trigger and make some major changes in your approach.
"Confidence when fishing dictates much of our success and can also fuel failure if we can't switch gears and make adjustments..."

There are occasions where we would find fish located out and away in deeper water merely a football field or less from where we caught fish in shallow water so deeper water nearby is always a good starting point. Often, the kinds of spots however that really seemed to attract fish during these adverse conditions were the most traditional spots a month or two down the road. Classic points, humps and structure that would traditionally would hold fish mid-summer would often load up with fish early in the year momentarily when weather became really ugly. This wasn't often a long term pattern as you would only find the fish on these spots for a day or two but this fast forward pattern where you fish ahead and hit spots that normally don't produce early in the season put fish in the boat when nobody else could get bit. Some of these spots were a considerable distance from the traditional shallow water shoreline areas that get the most attention in the spring. Often, the fish were washed out in color or pale which seems to happen on many lakes when fish make massive movements. Usually, some of the best spots were regarded as "community spots" but since we were fishing them much earlier than what tradition dictated, we had the spots to ourselves. Typically, a community spot is large, obvious and stops and routes fish movement. When fish are moving a lot, community spots often charge up with fish.

When fishing these deeper spots (some of them were as deep as thirty feet) early in the season, vertically jigging accounted for many fish but we also trolled lead core line with crank baits. Usually, the profile and characteristics of the spot dictated the best presentation. Complex rock spots that had many indentations, fingers and points were often all about boat control and jigging vertically over the top of the fish. Even with jigs however, we often approached these spots aggressively where this isn't a sit and wait game. We often used heavier jigs where we could get down and thump the bottom hard which seems to really attract fish and we often used an aggressive stroke that seems to trigger a reaction bite out of the fish.

Tipping the jig with a soft plastic or water soluble synthetic tail really worked well in this situation. For most wind and depth conditions less than twenty five feet of water, a very productive jig is the 3/8th Ounce Northland Tackle Eye-Ball jig for this thumping vertical jigging presentation. The metallic finish seemed to show up well especially in turbid dark water and the long shank hook with the barb holds plastics in place extremely well. Tip this jig with a Trigger X Swimming Grub for the best combination of action and scent. The Trigger X definitely gives anglers a big edge early in the season before the water warms up.

Looking deep during times of the season when fish should be shallow can salvage a day or two when things get tough. As an angler, it can be important to recognize the factors and changes happening on the water and becoming comfortable fishing locations that might not feel right at first. Once you become flexible however, make these adjustments and stick some fish, you will become much more comfortable with different situations that keep many anglers from catching fish.