By Dan Small - April 1, 2011
This spring, nearly 200,000 hunters will take to the woods in Wisconsin in search of a turkey. If this season is like others before it, less than a third of them will bring home a bird. Successful hunters usually prepare well in advance for their hunt, devise a game plan and then adjust their plan according to how the turkeys respond. Here are some tips that can help put you in the success column this season.

Scout Sooner and Later
Even if you're hunting familiar land, now is the time to start scouting that land to get an idea of how many birds it holds, where they might be hanging out and whether there have been any changes on the landscape since last spring. On one place I have hunted, there is an active gravel pit. Every time I check it out, the power shovels have gobbled up a few more acres. There are still woods, fields and turkeys, but the birds use new areas as their old haunts disappear. To hunt there, I'll have to find new places to set up, too. Logging, home construction and even crop rotation or plowing can also alter turkey behavior patterns. Check now, or scramble later.

Spend an afternoon or two glassing open areas for birds wandering around or feeding. If your spot has small woodlots, check them just before nightfall for roosting birds. If there is still snow, it will help you see turkeys in fields and open woods. You can even hike around and look for tracks. Gobblers have larger feet than hens. A gobbler's central toe is about as long as your index finger. Look for wing marks - straight lines a couple feet apart on either side of a tom's tracks - evidence that toms are starting to strut and display. If you scout thoroughly now, plan to go back at least once closer to your hunting period. Use the first two weekends in April or the Monday and Tuesday before your hunt to pinpoint turkey activity and choose several places to set up. Ideally, each will have a large tree you can sit against and offer a clear view of approaching toms. If you drew a late-season permit, remember that foliage in May will restrict visibility in woods that appear bare in April.

Location, Location, Location
Every turkey hunter hopes to locate a bird the night before his hunt, or at least before dawn on the day of his hunt. The classic way of doing this is to "roost" one the night before. To do so without spooking him is a tricky proposition, however. Bust a tom at dusk or dawn and he may fly a half-mile, forcing you to start all over.

To roost a bird, sneak into the area you plan to hunt before dark and look and listen for birds. On a clear, calm evening, turkeys usually fly to roost just after sundown. In rain, snow, wind or on cloudy days, they often fly up earlier. If you see or hear a bird fly to roost, wait until dark and use a locator call to try to get it to gobble so you're sure it's a tom. If he gobbles, sneak out and come back well before dawn.

If you fail to roost a bird, you can often locate one the next morning before daylight. Sneak into an area where you know there are birds well before the sky begins to lighten up. If you hear songbirds as you walk in, you are starting too late. Avoid walking any distance in woods because you may spook roosted birds. They can see just fine in the dark and will usually fly if you walk under them or even within 75 yards of their roost.

In the morning, it's a toss-up whether to wait for a tom to gobble or use a locator call to get one to gobble. If you call too loudly and a bird is too close, he may spook. Once you 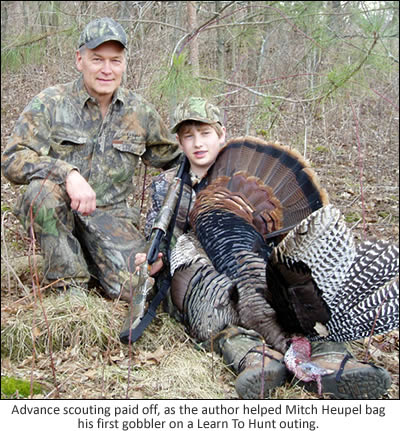 hear a gobble, however, you need to get into position quickly and quietly before he flies down. When I locate a tom before dawn instead of the night before, I usually set up by the nearest big tree and hope I am close enough to work him when he flies down. Too often, I have spooked a tom off his roost when trying to close the distance between us before setting up. On a calm morning, if you can hear him gobble, he can hear you call.

When Your First Set-up Fails
Notice I said "when," not "if." No matter how well you scout and how close you set up on a gobbler you have located, more often than not you won't shoot him at first light. He may fly off the other way, fly down and run off with a hen, clam up and never give you a clue to his whereabouts, or simply hang up and refuse to come close enough to shoot. Or, you may not locate a tom before dawn and be forced to find one when they're already on the ground.

When one of these things happens, you begin to earn your turkey-hunting merit badge. Anybody can locate a tom, set up near him in the dark, yelp a few times to get his attention and kill him when he comes strutting to the call. Far fewer hunters can turn a busted set-up into success.

There isn't enough space here to address every scenario, but I'll name some to give you an idea: tom with hens, silent tom, hung-up tom, rainy day. Then what about camouflage and blinds, call selection, when to call, decoy placement, time of day strategies, hunting strut zones, and on and on?

These are things you learn by putting in time in the woods. A good book, video or seminar can substitute for a lot of woods time for a novice, but even a seasoned hunter can learn from others. Put the pros' advice together with your scouting, locating and other planning and you'll be well on your way to a successful hunt.