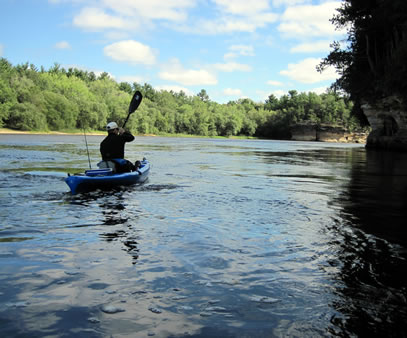 Steve Starr, a good kayak fishing friend of mine, was back in Wisconsin for the summer. After kayaking for peacock and largemouth bass with him in South Florida I was looking forward to kayaking for some Wisconsin River smallies. We talked about it a number of times, however the river seemed to be running high all summer, but finally we had our chance on September 10th. I do most of my kayak fishing on lakes, but had kayaked the Wisconsin in the Sauk City area a few times and caught and released a bunch of smallies. Having fished that stretch from Sauk City to the Ferry's Bluff takeout, Steve and I decided to try something new.

We met at the Rivers Edge Resort in Wisconsin Dells, dropped our kayaks and gear, and then ran my Subaru Outback and Malone MicroSport kayak trailer down to the launch at Pine Island. Steve would be fishing out of a Wilderness Systems Ride 135, which has a pontoon hull and allows him to easily stand to fish. I was in my Wilderness Systems Tarpon 140. Both are sit-on-top fishing kayaks that are fast, very stable and have tankwells behind the seats for plenty of gear and built-in rod holders.

We caught a break early. As we were pushing off for the day, I remembered that my car keys were still in Steve's SUV. We wouldn't have been happy ending our day and having to hitchhike back to Rivers Edge for the keys. The day was warm and sunny, although the 10 to 15 mph wind was hitting us in the face as we headed down river, which gave us an even better workout than normal. We took off at about 10:30 a.m. and enjoyed the beautiful rock formations dotting the first third of the trip. The last two-thirds offered both sandy and rocky shorelines that we worked with our favorite river smallie lures. For me it was the Rebel Teeny Wee Crawfish that I've literally caught thousands of smallies on and my other recent go to lure, the Kalin's Lunker Grub on a Gopher Tackle Mushroom Head jig. In the four and five inch versions I was using Blue Pearl Salt & Pepper along with Smoke Salt & Pepper. Steve loves his Heddon Torpedo topwaters and his "modified" rattle trap type lure. He takes the back trebles off this small lipless crankbait and adds a small willow-leaf blade to add more flash. For the front treble he uses one with some sort of feather dressing. I've seen his success with this in Florida for both peacock and largemouth bass. It also works on those river smallies.

We began catching smaller smallies soon after launching, working our way back and forth across the river to take advantage of rocky shorelines. We were after smallies, but you never know what you might catch on the Wisconsin. I was bit off after quite a fight with a big northern and then caught one on the Kalins that was 30 inches. The other thing that makes the Wisconsin River such a pleasure to fish, and just paddle, is the wildlife. We enjoyed the many blue herons, kingfishers and the eagles. A highlight of the trip was seeing an eagle in a tree along the shore and quietly floating closer and closer, to finally float right unem der it. At that point with camera ready, I was hoping it would take off, but no luck. Overall it was a pleasure to be on the water, even though we were a little disappointed in the fishing. Our largest smallie was between 16 and 17 inches and for the day we caught about 30 smallies. But, the day was more than just fishing, which is always a bonus when on the water on a beautiful day. We'll head back next season, and find those bigger smallies.

The Wisconsin River offers great kayak fishing for smallies the entire length as it runs from northern Wisconsin to its confluence with the mighty Mississippi. Steve and I were fortunate we took the opportunity to go when we did. Shortly after our day on the river the area experienced tremendous rains that caused significant flooding in the exact area we used as our takeout point.

As always, I'm happy to answer your questions related to fishing for smallies, whether in a kayak, wading or a motored boat. I can be reached at [email protected].