The fact that fish move into shallow water during the early part of the open water season is no secret. This general pattern is fairly universal with both warm water and cool water fish that spawn in the spring. Whether the targeted species is bass, walleyes, northern pike or even pan fish, anglers are often finding fish shallow providing that the weather is stable and that this shallow water is warming up. This stratification where shallow water close to the shoreline warms up ahead of deeper, offshore water is crucial for many of these shallow patterns to develop. On reservoirs and lakes, anglers often find fish of several species under the generic "bay within a bay" rule where you look for a shallow bay that comes off the main lake and once you get in this bay, look for more bays that eventually get smaller, shallower and more protected. These areas are often warmer, weeds are ahead of schedule and anglers can often pinpoint key locations by using a temperature gauge.

Warm water is relative but what anglers are looking for is water that is warmer. Sometimes, a column of warmer water gets pushed up along a shoreline from a light wind. These pockets or pools of warmer water often seemingly float around and areas that are protected from the wind seem to offer the most consistency. Today's anglers often talk about the importance of high definition sonar, structure scan, GPS mapping and all of the other new technology that has revolutionized fishing but early in the year, two tools that are irreplaceable are still a good pair of polarized sunglasses and a surface temperature gauge.

Polarized sunglasses not only enable you to look into the water for fish but to watch behind the lure for following fish. Good polarized sunglasses also enable the angler to look for physical structure whether it is flooded timber, emerging weed growth, cattails, bulrushes, rock or boulders. So often, carpet grass or algae on the bottom will give the bottom a dark color while bare sand or gravel will look much lighter and you can see the contrasts. Often when the sun is out, many fish will position themselves over the dark spots and when the sun is bright, some fish even seem to rise up and hang just under the surface where the sun can hit their back. On sand or gravel bottoms with scattered boulders, the shadows created by the larger rocks often create dark spots as well. These observations are pretty universal and can be applied to largemouth and smallmouth bass, walleye, bluegill, crappie, perch and northern pike during this pre-spawn period. All of these different fish species spawn at different water temperatures however with bass and bluegills building nests. So the timing will be staggered amongst different species of fish. 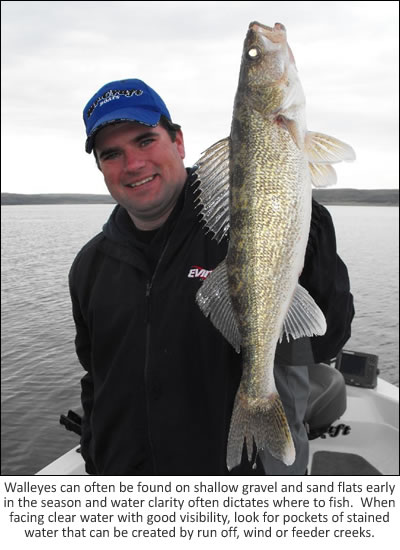 As a general rule of thumb, water clarity is often relatively clear early in the season because on many lakes, the water will green or brown up as the water temperature climbs. This still cold and clear water presents many challenges for the angler. For example, later in the year… we can often catch fish right below or behind the boat in surprisingly shallow water but for reasons listed above, fish are often much spookier and harder to approach during this spring period. There are a couple of options we have as anglers. We can look for stained water which sometimes happens from runoff, feeder creeks and wind. If stained water can be found, a good rule of thumb is to fish the depth of water that is just slightly deeper than what you can physically see. For example if you can see down three feet, try fishing in four to five feet of water unless you can physically see fish shallower.

When stained water can't be found, fishing in shallow clear water often takes some adjustments in order to be successful. Fish are often just much more difficult to approach in clear water. Boat noise seems to be overrated in the sense that it seems like fish have a comfort zone around them and when you come within that comfort zone, they merely scoot away regardless. The water displacement of the boat seems to be what fish key in on. When fish follow the lure closer to the boat, sudden movements by the angler seems to spook the fish more than anything else. Early spring can be much different than other times of the year in that big fish often move up into expansive shallow areas that are a considerable distance from deeper water. These fish that are in these types of locations just seem much more on edge and have to be approached with some long casts. People often talk about stealth when fishing these types of situations but in a twenty foot boat, it is hard to be stealthy. The fish know where you are. The key is to control the boat so that you don't drift over good spots and to hit the spots with long casts. Many presentations often work better with monofilament line as fluorocarbon sinks and often seems to speed up the retrieve and the best retrieves are often subtle and slow. With good polarized glasses, casting targets are often some type of cover or actual schools of fish.

" Today's anglers often talk about the importance of high definition sonar, structure scan, GPS mapping and all of the other new technology that has revolutionized fishing but early in the year, two tools that are irreplaceable are still a good pair of polarized sunglasses and a surface temperature gauge..."
When targeting an actual fish, long casts ahead of the fish are often the most productive. A slow presentation that can be worked in a matter where the fish actually swims up to the presentation is often the most productive. Soft plastics really shine during this time for all species. For walleye, pike and bass, a paddle tail body on a jig head is tough to beat in open water where the lure can simply be swam back to the boat. Northland Mimic Minnows are really tough to beat and catch a lot of fish. The tail gives off a strong vibration and the pointed head tracks through the water true. Once the water warms up and the fish become really aggressive, many different soft plastic formulas will work but early in the season, some soft plastics have much better scent and action at slow speeds. Other good soft plastic options are any of the Trigger X products as these baits really shine in cold water. For more flash and displacement in the water, traditional suspending stick baits can also really shine. An under used stick bait on many bodies of water that really catches fish is a lure called the Salmo Suspending Sting. This lure puts out a lot of vibration you can feel on the rod tip and has a loud rattle chamber but most importantly, this lure just catches fish. The key to working these baits early in the year is to pump the lure forward and just letting it hang motionless for at least five seconds or more between strokes. Experiment with the cadence and duration of the pause.

When picking out a good pair of sunglasses just for fishing, don't make the mistake of focusing on cosmetics or style. On most water we fish in the upper Midwest, amber or brown lens really allows you to see further into the water and look much further across glared surface water. The best lens I have found for sight fishing is the Acu Tint lens made by the Flying Fishermen sunglass company that is based out of the Florida Keys where these lenses were developed for flats fishing applications. Each species (whether you are targeting pan fish, bass, walleye or pike) might require different tackle or the details of the pattern might differ from species to species but what is universal is that some of the largest fish each season regardless of species can be caught in shallow water right before the spawn if the weather is stable and warmer water can be located.