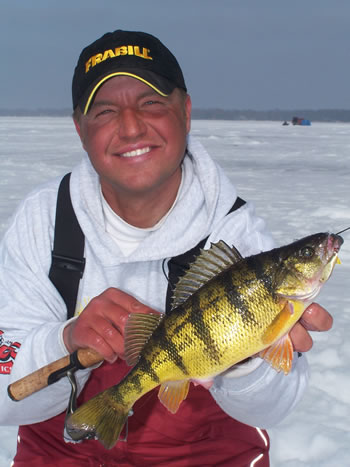 We are entering what many ice-anglers declare to be their favorite time of the year for ice-fishing. The weather is warming up, the days are getting longer, and the fish are really starting to eat. During mid-winter there can be a time when getting bites can be kind of a tough deal. From now until the end of ice-fishing season, bites will be more frequent and your nose is going to stay a lot warmer when you're on the ice. Here's how you can get in on the action.

First thing, and this is very important: Don't push your luck on the ice. Know when enough's enough. Falling through the ice is no fun! If you're not sure of ice conditions, get sure. Just like you don't need to be the first person on the ice early in the season, you don't need to be the last person out there late in the season. Use common sense. If no one else is out there, there's probably a reason for that. Be safe!

Also, know the rules. The regulations change from state to state. In some areas walleye, bass, and northern pike season is open year 'round, in other places those seasons close at some point. Most areas allow you to catch and keep panfish all the time, but nonetheless, make sure you know what you can fish for.

Now for catching the fish. Just as in open water fishing, it's important to figure out what the fish are doing and where they're doing it. The "where" part is really important. I've caught late season perch through the ice in South Dakota in five feet of water, and a couple days later in North Dakota in twenty five feet of water. Different lakes have different habitats and the fish behave differently. Pop a bunch of holes until you find where the fish are.

Once you find them, you've got to put a bait down there. When you can see the fish on your depth-finder, it's a good idea to keep the bait a little bit above them. Fish can see up better than they can see down, so they're more likely to move up for a bait than to move down. As you drop your bait to the fish, keep an eye on how they're reacting to it. If they aggressively move up to meet it, that's good. It's a sign that they're willing biters.

If they don't move up to it, lower it slowly to them. Don't let it fall right down to them, lower it slowly, stop it, shake it a bit, then lower it more. Eventually you'll have to lower the bait right into their face. If they still won't eat it, try a different bait. If that doesn't work, move to other holes to find more active fish. Don't spend too much time fishing for fish that don't want to eat. There will be others nearby that are willing to eat.

In most places perch and other panfish will be the most sought after species this time of year. All you'll need for bait are a few of Bro's Gill-Getters, Slug-Bugs, and Blood Worms, some small Buck-Shot Rattle spoons, and some Gulp! Alive! Minnow Heads, Gulp! Maggots, and Gulp! Earthworms to tip the spoons and jigs with. Keep moving until you find the fish, give them what they want to eat, and enjoy your time on the ice during the late ice-fishing season.