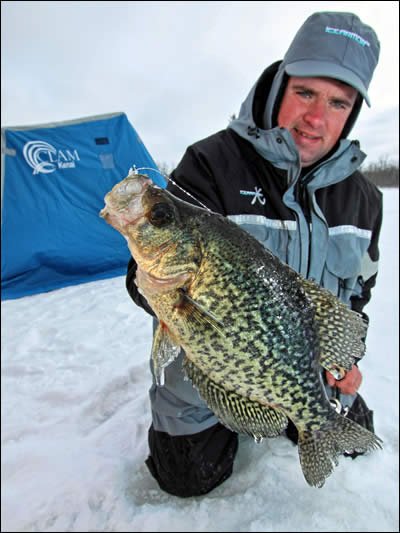 The late ice period is often a prime window for anglers targeting panfish. Bluegills, jumbo perch and crappies often stage in somewhat predictable locations as the ice begins to rot. A top strategy for locating fish is to identify weed beds and structure that is located between wintering holes and massive basin areas where many fish winter and shallow bays that typically see spawning activity. One overlooked pattern however that often rewards anglers with larger fish often takes place in relatively deep water. The deep basin areas that intersect the mouths and necks of shallower bays where these fish will eventually spawn are often a major staging area that produces big panfish.

Deep is a relative term but essentially, this deep water is the transition of a basin at the mouth of a shallower bay that will eventually warm up and will hold fish the first month of the open water season. Typically, the sweet spot is the transition where the bottom is comprised of a sticky, silt muck. Usually, when we are finding panfish during late ice over deep water… it is near this sticky muck bottom. On some water, this basin transition might be fifteen or twenty feet, other lakes might be much deeper. On Devils Lake for example, we are often finding enormous perch in water as deep as fifty feet or more at late ice. These fish seem to build up in these locations and skip the transition between the deep water and the shallow water where they will eventually spawn. The underlying factor that keeps some of these fish deep is often midge larvae and other invertebrates that really seem to pop when the days become longer.

Anglers have long realized how the longer days in March seem to rejuvenate shallow water and weed beds in particular but a transformation also occurs over deep mud. The deep patterns aren't always a numbers game but the fish that do hold in these locations are often large, mature fish.

Plastics often shine particularly at late ice but their effectiveness in deep water can be evident because plastics are very durable. When fishing deep water, there is a peace of mind that you still have something on the hook after missing a fish… to reel up and check when fishing water than deeper than fifteen feet cuts into fishing time. Plastics also allow you to get back down into the water faster after unhooking a fish. Getting back down to the fish takes longer when fishing deep water and the longer it takes to get a fish unhooked and the lure or jig back into the zone, the less fish you are able to pluck from a school. Plastics can make you more efficient.

The Northland Hexi-Fly Jig is one of my favorite horizontal panfish jigs for fishing deep water. This particular jig rockets through the water fast and shows up well on electronics in deep water. The wide profile on the neck also seems to show up well to the fish particularly in deep water where light penetration might be lacking. These jigs also quiver and work well in conjunction with plastics.

Most of the time when we find fish relating to this pattern, the fish are relating to the bottom or possibly suspending off the side of the break if the basin has an abrupt break but note that soft bottoms that do have a sharp break are somewhat unusual and hard to find on most lakes. Often, the big females even seem to rub their stomachs on the bottom which seems to help the egg development. The jaws of the fish will sometimes even have mud in them and look red. The digested residue in the stomachs will often look inky black when they are feeding on these bugs where as freshwater shrimp will often look orange.

What I find surprising is just how late some of these fish will stay on this pattern. We have caught enormous panfish using this strategy on some of the last days of the season where we could barely walk out on rotten ice. This pattern is often overlooked by many anglers because typically, there will also be fish holding in locations that are related to the shoreline and these locations usually attract the most attention from anglers. Exploring deep water at late ice goes against the popular grain of what is preached by many ice anglers but these deep water midge patterns can produce some of the largest panfish of the season.