The Art of Drilling Holes 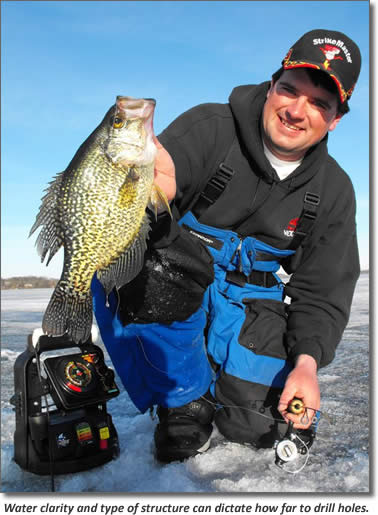 When you look at some of the best ice anglers, there often is some strategy in how and where they drill holes. Ice anglers might not be able to drift or troll but they can drill holes in a pattern and discipline themselves to fish the holes in a set time to cover water. There is a method behind the madness and successful anglers often have a strategy behind the drilling. Just drilling a bunch of holes for the sake of drilling holes can be counter productive if there is no purpose.

The reality is that some of the better days I have had on the ice were days where I didn't have to move a lot and was able to catch a lot of fish out of a handful of holes. For whatever the reason, there was enough fish underneath me and new fish moving in below me where I didn't have to move. There is also the play it safe scenario during tough conditions where patience and small moves on a spot that holds fish can be the best call.

I don't like the idea of big moves where anglers drill lots of hole and attempt to cover a lot of water without a purpose. Too much time is wasted. Pick spots, pick structure and have a game plan where there should be fish. If you fish a few spots through and don't contact fish, the next step is gather more information so that you can make a more educated guess on where fish could be as finding fish is often the process of elimination. Even on a small lake, you can't look at the whole lake through an eight inch hole. You have to be smart and pick your battles. Once promising areas are found, let lake maps and GPS guide and suggest where and how to drill the holes.

There are several factors that often dictate how and why to drill and fish several holes. One common scenario occurs when fish are not sorted by size, big fish mixed right in with small fish where the big fish are the minority. Most of the time, the big fish will be the dominant fish and usually, the first fish out of a hole will be the largest. As the big fish get plucked, the size drops off. This is particularly true in thick stands of weeds, underwater cribs and planted structure where anglers are finding isolated pockets of fish.

Another factor that can demand drilling a lot of holes to catch fish are roaming fish that move across the basin of a lake. These fish might suspend or school vertically versus spreading out across the lake bottom. These fish are also generally moving, typically about the speed of a slow walk. This type of situation generally takes some effort to find these fish and sooner or later, the school will

"I don't like the idea of big moves where anglers drill lots of hole and attempt to cover a lot of water without a purpose. Too much time is wasted..."
drift off where you either have to drill more holes to stay on the school or find another school of fish.

Time of day is another element that can dictate the strategy as low light conditions often see the best fish movement for not just walleyes but even panfish. When fish are moving and the movements are somewhat predictable, you can set up on good spots and drill less holes because the spots are recharging with new fish. Often when the sun gets a little bit higher, this strong fish movement stops and you have to drill holes to hit fish.

In a perfect world, we would always be fishing familiar water where we know the details of the lake bottom like the back of our hand and also have a GPS with this information saved but the reality is that some really good water doesn't have good GPS mapping available or the detail might be lacking. New or unexplored water can only be dissected one way and that is by drilling a lot of holes. Even on familiar water where there might be good mapping available, there are often little subtle sweet spots that will never show up on a map. The only way to hit these gold mines is to drill holes and basically stumble on to them so maps and GPS are a reference but remember that some of the best spots don't look that good on a map.

Applying good strategy to drilling holes separates the best ice anglers from the average. The first variable is how far apart to drill holes. When exploring basin areas or expansive shorelines on big water, we often begin our search by stretching the holes far apart. Much like open water fishing, we make big moves to find fish. Once productive or potentially productive areas are found, we focus on specific areas and drill holes much closer together. A good rule of thumb when searching through an area that you know holds fish is to consider water clarity. Ten foot visibility means drill your holes ten feet apart. I usually use the water visibility factor when I first move through an area but there are other factors that might cause me to slow down and drill holes even tighter.

We often drill holes much tighter if we are fishing in groups so that if somebody gets on a hot school of fish, there is another hole available. Structure like weed growth, flooded timber or large rocks might also create windows of visibility where there is an obstruction to how far the fish can see you. A massive rock pile for example might take several more holes to fish through because fish five feet away on the opposite side of a boulder for example can't see you. The other factor already touched on is the mood of the fish. High sun, clear water, fronts or other factors that push those fish down where they won't come underneath you means more holes. Really touch fish require more holes because you have to drop right down in front of the fish, much like a bass angler trying to find the right angle. When things get difficult, you can't assume that the fish will swim over four feet or even turn around.

Above are several reasons why an ice angler should be willing to drill a lot of holes. What really good anglers will do however is slow the day down by also spending enough time in an area so that the bite can develop. Remember that big moves find fish but small calculated moves catch fish. If you are in a good area that has slowed down and can't sit still… make short, small moves where you can be in position to slide back to spots that produced fish earlier. If you are over a basin or type of structure, good spots will recharge with each new school of fish that moves through. Weeds can sometimes be different in that some pockets take longer to recharge because the fish might not get funneled into them the same way as fish relating to a point or depression for example. Remember to slow the day down and adjust the presentation so that you can catch the fish below you. There have also been occasions particularly with shallow walleyes where we found that we caught more fish by drilling just a few holes in the best spot on the spot and let the commotion settle down as a lot of activity shut the spot down. Heavy snow also can create a lot of slush and water on the ice so again on a good spot, drill fewer holes so that you can fish the spot the next day without having to stand in a foot of water.

In order to fish aggressively on the ice, you need a few essentials for equipment. To find fish and make the big moves, I am often fishing out of my pickup or off my snowmobile but to really scour an area for fish, nothing beats fishing out of a portable one man Fish Trap or fishing outside. To fish outside in extreme conditions, you are going to need the proper clothing which I highly recommend the Ice Armor suits as they allow a lot of mobility, are dry and most of all warm. When you are fishing outside or off a snowmobile and a twenty mile per hour wind is hitting your back, you need to have Ice Armor. The other piece of equipment that makes this style of fishing much more productive and enjoyable is a fast, lightweight auger like the StrikeMaster Solo. After you use a Solo, everything else feels too heavy and slow, kind of like picking up a much heavier shotgun.