By Steve Huber - July 1, 2001
Last month, I talked about finding muskies, giving you some simple ideas on getting into a muskie's home range. Click here to read last month's article. As I said before, finding them is the tough part. It's real simple, if you can't find muskies, you're going to have a bugger of a time catching them. So, with the simple, easy, "Steve Huber's Open Your Eyes and Look" method of muskie locating, it now comes down to catching these swimming bags of attitude and teeth. 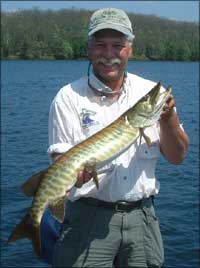 One of my favorite winter past times is hanging out at the local DNR office and pestering the fisheries guys. I've said it before and I'll say it again, "TALK TO THESE PEOPLE", there's a wealth of information that they possess, they'll give you all kinds of good stuff, but they won't help you if you don't ask them. Winter is a good time to talk to fisheries personnel, their work load is sometimes lighter and they'll have more time to spend with you. One of the things that I learned is that a "Good" muskie lake might have only .5 to .7 muskies per surface acre of lake.

Think about that last statement. .5 to .7 muskies per surface acre. That means that a typical 500 acre northern Wisconsin lake might have 250 muskies in the entire lake! Now, you have to find these elusive critters, they're not spread uniformly around the lake, they're clustered in certain areas, areas that I told you to find last month.

Ok, you're in the area, there's been panfish anglers around, you've got nice weeds, there's a deep hole nearby, maybe a downed tree or some stumps scattered here and there, the perfect area. Now what? Now, you only have to choose the correct lure, cast it in front of a muskie, finding one that's in a positive feeding mood, and hope that the lure you chose interested the fish enough that it's going to want to follow and strike that lure. If I think about this too much, I'm amazed that anyone catches a muskie on a lure at all!

Well, unless you can sweet talk them into surrendering, you have to again be observant. What types of forage fish are around? Most times, you'll see small bluegills and perch, which makes lure selection easy. What are the weather conditions? Water temperatures? Time of day?

If the water temps are up, as they are now, faster moving lures are usually the "Ticket to MuskieVille". Bucktails, spinnerbaits, and crankbaits will trip a muskie's trigger, presented properly. Casting these lures out and retrieving them will catch the occasional muskie, but there's some little tricks that make them more interesting to "Ol Esox". Let's break the above lures down into separate categories and talk about them individually.

Bucktails, more muskies are probably caught on bucktails than any other lure type. While this sounds great, it's somewhat misleading. I say this because it's real simple, anyone that has aspirations of catching a muskie goes

out and buys a black muskie bucktail with a chrome blade. So it comes down to sheer numbers of lures being thrown. If a crescent wrench with a 9/0 treble had a reputation for catching muskies, I'm sure that everyone new to the sport would run out and buy a crescent wrench, put hooks on and throw it. People would catch fish too. But bucktails are good fish catching tools. Yes, throwing them out and retrieving them will get you fish but there's things know and do with bucktails to get them bit more often.

First of all, when the lure hits the water, give it a quick snap to get the blade turning. It's one of the most common mistakes that I see new muskie anglers make. Half of the casts that they make, the spinner blade isn't turning, making the cast ineffective at best, a waste of time and effort.

Work bucktails shallow over the tops of weeds, work it deep along deep weed edges and down points and work it in between. But remember, as you're retrieving the lure, you can steer it around weed clumps by moving the rod tip from one side to the other. You can change the running depth by raising or lowering the rod tip or speeding/slowing the retrieve. One thing that I like to do with bucktails is to give the rod tip a twitch or two as you're retrieving the lure. While a steady retrieve will sometimes get fish, I almost always twitch the rod on occasion as I'm retrieving the lure. This causes the hair on the lure's tail to pulse, giving it the appearance of life, sometimes triggering a strike. I will sometimes thread a 2-3" white PowerGrub onto one of the rear hooks, adding additional flash, bulk, vibration and in the case of PowerGrubs, a scent trail.

Bucktails with long, narrow blades (called WillowLeaf blades) will run deeper than any other blade type. Use spinners with this type of blade when you want to fish deep or work a lure fast without it breaking out of the water. WillowLeaf blades offer the most flash and the least amount of vibration and resistance when retrieving. Typically, these lures are used during the warm, summer months when the water is at it's warmest and muskies want a lure traveling quickly.

The most common spinner blade is one that is almost round in shape. This is called a Colorado blade. Colorado blades will give you the most vibration, the least amount of flash and the most "Lift" to the lure. These blades are easy to fish slowly over weed tops and the lure of choice when fishing dark and/or stained water. Colorado spinner blade lures are also the best choice of spinner blade type for night fishing.

In between these two extremes is the Oklahoma blade spinner. The blade is rounded but slightly elongated. It is an excellent compromise lure. Slightly less lift and vibration than a Colorado, slightly less flash than a WillowLeaf blade and not quite as deep of a runner. Personally, I like this style of spinner blade.

Spinnerbaits are used in most of the same situations and conditions as are bucktails with some exceptions. I like to use spinnerbaits when I'm fishing heavy cover. When the weeds are close to the surface of the water and a standard bucktail's treble hook is snagging too much crud, it's spinnerbait time. This single hook, riding in the up position, will come through most weeds clean. I will run a spinnerbait right over fallen logs, tree branches, bump right against stumps and generally throw into places that bucktails would fear to tread. There are muskie sized spinnerbaits, but last season, 42 of the 107 muskies boated by clients and me came on « to 3/4 oz. bass sized Secret Weapon spinnerbaits. So don't let the small size fool you. They can produce big time!

Crankbaits...Ah, the "Big Stuff", the really cool looking lures. I mean, these look like something that's real, something edible, not something abstract like a bucktail or spinnerbait. These look like a fish, kind of swim like a fish and like I said, "They look cool." Crankbaits have a built in action, cast them out and retrieve them, they'll wobble all the way back like a happy puppy. Sometimes, that is enough to trigger a strike. But, there are things to remember when fishing a crankbait.

These lures require the hardest hookset of all. When a muskie strikes a bucktail or spinnerbait, there's not much for a muskie to hang on to, just metal, feathers, hair and hooks. Often, a muskie will hook itself on the strike, not so with crankbaits. When a muskie strikes a crankbait, they want that lure and they'll grab it tight, tighter than my wife's grip on the checkbook when I mention Gander Mountain. So when a muskie strikes, not only do you have to set hooks into that hard, boney mouth, before you can do that, you have to break it loose from that trophy's grip. Sometimes, that's not easy, especially with wooden lures. I've had lures with embedded teeth stuck in them!

Things to do or remember with crankbaits. First of all, the faster you retrieve a crank, the deeper it will dive. So if you're fishing them over weeds, if you are getting weeds, slow up the retrieve a bit and/or hold the rod tip higher. This makes the lure run shallower.

One weed bed tactic that I really like to use is Twitching. This is a "non-standard" use of shallow running (small lipped) cranks. What I do when twitching is use short, downward snaps of the rod tip. This makes the lure dance and dart from side to side, looking like an injured baitfish, easy prey for an opportunistic muskie. This retrieve also doesn't run the lure too deep, making it perfect for over the weed tops presentation. Twitching a crank presents a lot of flash and vibration without a lot of horizontal movement. This is a great early season or cold front tactic.

Muskies under these conditions don't (and won't) chase a fast moving lure, but sometimes they don't want a slow moving lure. Twitching gives the illusion of speed, yet the presentation allows a sluggish muskie every opportunity to grab that lure.

Great twitching lures are the 6" JakeBait and the similarly sized Crane Bait. I'm sure that there are other fine twitch baits, it's just that I've had great luck with these and "If it ain't broke, don't fix it."

The major mistake that I see beginners make twitching is that it can be tiring work. You have to SNAP that rod tip down hard, making the lure dance in place if possible. Many start out doing this, but before too long, they're pulling the lure through the water, not the same action at all, and not usually as productive.

So, if you get some of these lures, remember the points that I've covered in this article, you've got the basics covered. With a little intelligence (I catch muskies all the time, how much intelligence do you need?), diligence and perseverence, you'll be able to brag about the one that didn't get away.

So, until next time, see ya,