Poof - The Magic's in the Draggin' 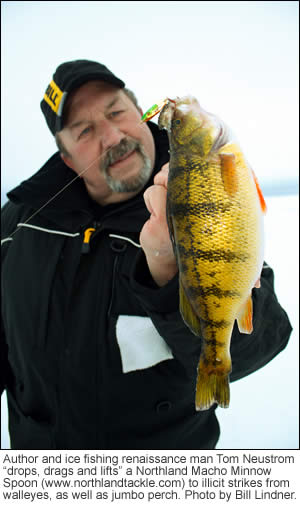 A sudden stop, drop, drag and lift can produce fiery strikes when all else fails
Today's ice angler has sled-loads of advantages over the pioneers of yesteryear. Take present-day lures, for example. Tackle technology offers the capacity to mimic the size, shape and color of forage to a tee. And with nothing more than a simple rise and fall of the rod tip, they have the curb appeal to flip-flop on the drop and trip the trigger of passerby's.

But a fish's mood may change like the wind - literally. Foul weather fronts, as well moon phases in the minor, can take a good bite south in an instant. When I'm hunkered over fish and they're either in a negative state or quit biting, I change from the 'normal' jigging motion to a quick drop to the bottom, a drawn-out drag over the lake floor, and then a sudden lift, which causes a poof of silt or sand to follow the lure's path. The sequence often induces fiery strikes when all else is failing.

Noise Makers
What's my reasoning for a sudden drop of a lure to the lake bed? It creates a ruckus like no other as it bashes the bottom. And the occurrence often induces an instinctive strike from even the most lethargic loiterer. But not all bottoms are created equal when it comes to trying this technique, nor are the lures that best perform in this situation.

The best bottom for the job is firm; especially ones with rock, gravel, and my favorite - covered in clams. Quite a clamor is created as a lure crash lands on any of the aforementioned substrates, but when a lure collides with clam shells there's a distinctive hollow clacking sound that summons fish, predominately perch and walleyes.

But I'll go beyond just dropping the lure to bottom and then lifting it back up and waiting for a strike. Often, I'll get the lure pulsating and drag it along the lake floor before lifting and letting it set.

Pulsate and drag it, you question? How is that done when I'm ice fishing in such tight confines, actually across only inches of linear space? Nowadays, even the heaviest lures are designed to impart an action all their own, and, the best of the best will flutter out to the side as they tumble towards bottom.

Take, for example, Northland's Macho Minnow - my hands-down favorite for this technique. The Macho Minnow is a heavy solid brass spoon that plummets fast and hits hard. But its underside is forged at an angle that causes the spoon to sashay off during the fall. Another heavy-weight champion to consider is Northland's new LIVE-FORAGE Fish Fry Minnow Spoon, a lifelike lure that has baitfish flanks digitally imprinted onto the lure. Couple this perfect impression of the real deal onto a lure that's heavy, yet has a curvaceous shape that allows it to waver wide and you have the perfect lure for creating chaos.

Muscle Mayhem
Once reaching the bottom, the a heavy spoon will end up a foot or less off dead center below the hole, but that's more than enough to allow me to shake my rod tip like I've had one pot of coffee too many. This gets the lure's head hopping as it lays on bottom. The quaking motion also pulls my line taunt and the lure starts to slowly drag. As I lift the rod tip, I slowly reel in to the point where the spoon and line are completely vertical.

The rod best engineered for this ploy is Frabill's 27-inch Bro Series Quick Tip-which has the perfect nimble-action tip that allows fish to grab the lure off the bottom, as they often do, without alarming them that they're about to be hoodwinked.

After the lure's to the point that lifting the rod tip will bring it straight up, I let it lie motionless for a few seconds, even up to a minute, in case a fish has been eyeballing the action. If the spoon is not plucked by an onlooker, I'll give it a quick lift, firm enough that bottom sediments plume up behind the lure. Now I hold the lure motionless for several seconds a foot or two off the bottom before repeating the process. Often, this is when it gets smacked.

Because line twist is a real problem when jigging aggressively, I'll factor in an InvisaSwivel-a neutrally buoyant swivel constructed with an advanced fluorocarbon material called "Fluoro-Clear"-which is literally invisible in the water. Obviously, the invisibility of the swivel is a positive note when dealing with fickle fish in clear water. But the neutral buoyancy of the InvisaSwivel is perfect for plucking-the-lure from the bottom as the swivel hangs static in the water column, rather than gravity pulling it downward.

Tipping required
To tip, or not to tip: This is not even a question when dealing with meat lovers. Tipping the spoon with a lively minnow's the only way to go - full minnow when the fish are chomping, snipping down to a head-only otherwise.

The minnow to be as lively as possible, too, even when dragging lures on the bottom. I keep bait well-oxygenated and insulated from freezing in a Frabill Aqua-Life Bait Station. And to keep them active even after hooked, I go through the tail rather than their lips. By hooking a minnow this way it not only keeps the minnow alive longer, but encourages it to swim harder, especially when the lure's lying on bottom. This way, when the spoon is idle, the minnow still struggles and draws attention.

Rock bottom
Hitting rock bottom is a good thing, especially when the bite turns bad. When fish refuse your offering, seek out clams, gravel and rock and drop a heavy lure hard. Get the lure clacking and then drag and lift it along to create mini-clouds of bottom sediments. And hang on because this technique can produce fiery strikes when all else fails.

Tom Neustrom
Tom Neustrom is one of the best fishing guides in Minnesota and a tireless promoter of the fishing industry with 33 years of experience backing him. Tom has been recognized by In-Fisherman, North American Fishing Club, Fishing Facts Magazine, and Minnesota Sportsman as one of the top walleye fishing guides in the country. Working closely with numerous publications, Tom writes constantly from his home in Grand Rapids, Minnesota, and enjoys sharing his knowledge and expertise in the sport of fishing with thousands of readers.Tom leads fishing seminars and workshops throughout the Midwest. He has led seminars and workshops in Denver, Buffalo, N.Y., Chicago, Milwaukee, Detroit, Mich., Bismarck, N.D. numerous cities throughout Minnesota, and many smaller towns and cities across the Midwest. For more information on Tom visit his web site at www.mnfishingconnections.com.
TRENDING DISCUSSIONS
Advertise here