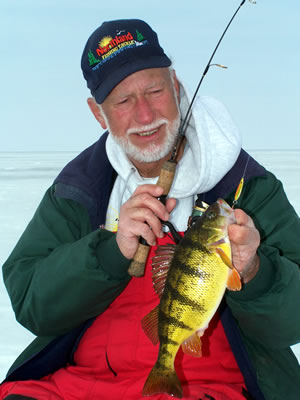 Early ice can provide some outstanding action for a variety of fish. Walleyes, crappies, perch, bluegills and northern pike are all willing to eat your bait when the ice fishing season starts. As soon as you know the ice is safe, you should get out there. Once you're on the ice, there are a few things you should keep in mind to maximize your chances for ice-fishing success.

First of all, it's important to keep noise and motion to a minimum. In many bodies of water, especially if you're after panfish, they'll be in fairly shallow water, ten feet or less. Think of that: You're directly above the fish, only ten feet away. If you make too much noise or move around too much, the fish are going to get spooked. They'll probably move away from the area you're fishing, and if they don't, it'll be hard to get them to take your bait. There are some things you can do to reduce noise and hide your motion.

Get to the area to be fished early. Determine where you want to fish and what time you expect the bite to start. There will often be a flurry of fish activity an hour or so before the sun goes down. If you think the bite will start at five o'clock, get to your spot and get set up by four-thirty. Get some holes punched and have everything ready to go when the fish move in and start eating.

Early in the ice season there often isn't much snow. If there are patches of snow on the ice, set up on snow if it's over a good area. The snow will muffle any noise you might make, and it will also hide any movements you make.

If you'll be fishing during the day, fish from a shelter. If you're in a shelter, the fish can't see you move as well. If you're outside and back-lit, every motion is detected. Frabill shelters are black, so the fish can't see you moving around inside it, all they see is a big black blob. Big black blobs don't spook them nearly as much as something that's moving directly overhead. And, those Frabill shelters are super comfortable to fish from. Don't move around any more than you have to. I find that if I don't drill too many holes, I'm less tempted to move around a lot. Later in the year moving around is a good thing, but early in the year in shallow water, it can reduce your catch.

If the fish are spooky, go with lighter line and smaller lures, especially if you're after panfish. At times panfish are incredibly easy to catch, and at other times they can be pretty tough to fool. Light line and small baits make them more willing to bite.

Two or three pound test Trilene Cold Weather or Micro Ice line does a great job when the panfish are shut off. Tie a small Bro's Bloodworm or Slug Bug onto your line and drop it down there. Much of the time you'll be sight-fishing: You can watch the fish come in and look at your bait and hopefully eat it. That's fun stuff.

Again, make sure the ice is safe, and as soon as it is, grab a few of Bro's Bugs and get out there. If you're quiet, and if the fish are there you'll catch a few of them for supper.