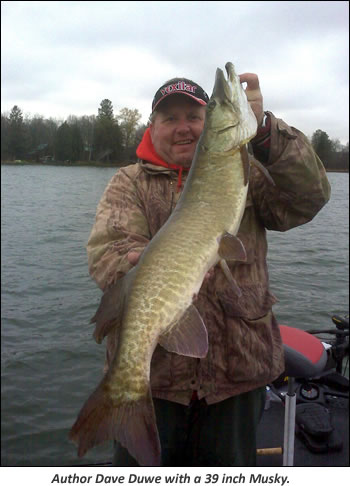 The full moon in October has come and gone and as I wrote last month, I was fishing in Polk County for full moon muskies. As a rule, the full moon in October is the best time to caught muskies! We settled on Bone Lake, which has been a favorite selection for several years. Although the lake sometimes varies, the annual trip itself has been taking place for close to 20 years; I've only missed the outing once due to double knee surgery: last year. This is more than a fishing trip for me; I look forward to spending time with two of my closest friends from college. Those years since college have gone by faster than Tim, Steve or I have been able to fathom, now we all have kids, wives or girlfriends and even we have to admit that we are fortunate to be able to continue this fishing tradition with all of our adult responsibilities and that fact that sometimes when we are together, we act a bit like college kids. It gives us a chance to compare and contrast each other's lives.

We spent part of this year discussing just how many fish we've caught on these trips, and this led to some serious debate. We finally settled on a number between 60 and 80 muskies. The biggest one is actually a tie, as we've had two fish at 45 inches. The lakes we tend to fish don't really have that many monsters.

Now on to this year's trip. We met up with each other on Thursday afternoon in Amery, WI, home of the Apple Flowage. As the word flowage indicates, it is a river impoundment controlled by a dam. We have found throughout the years that the muskies will choose the outside bends of the channels instead of the large expansive weed flats. Our approach was jigging a black reaper on an Esox Cobra jig from Bait Rigs. As part of our presentation, we drag suckers around as well, one on a Thill Big Fish slip bobber and the other two lines were fished straight beneath the boat. All three lines had quick strike rigs. Anyone who has ever sucker fished realizes that the worst part is the weeds, both submerged and floating. This year the Apple Flowage was full vegetation, even the channels which are usually just smooth hard bottom. Two hours after launching the boat, it was back on the trailer. We did have one bite on the jig, but we weren't successful in landing the fish. This year, the weeds won. After speaking with a local angler, he said that they had never killed the weed growth this year, so the condition of the flowage made perfect sense.

Day two was met with beautiful fall weather, south winds at 10-15 mph, air temperatures near 70 degrees and water temperatures in the mid 50's. Today, we were ready, 10 suckers, and a few adult beverages. We spent day two and three on Bone Lake, this is my friend Steve's home lake as his parents have had a cabin on this lake since he was a young boy. The great thing about being on your home water is you know all the secret honey holes that most people don't. Every spot we fished had a story whether it was near a spot on shore that held memories of a campfire back in high school 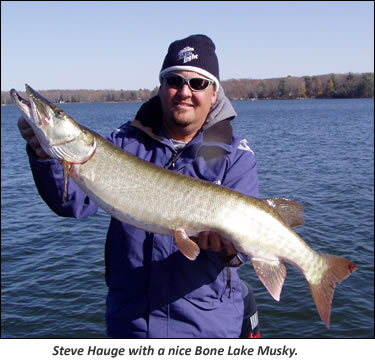 days or a memory of the "big fish" that got away. Because there weren't a tremendous amount of weeds, we chose to run 5 rods; three down poles with suckers and two bobber poles. The structure we concentrated on were windswept points. All points are not created equal, the like the steepest breaklines the lake will offer. You will find points associated in close proximity to weed flats hold more fish. The depth of water we worked was 12-15 feet. I like to position the live bait 1-2 feet off bottom, and slowly use our electric motor to work down the shoreline.

With perfect conditions on day two, we boated two muskies, one 36" and one 38", and one northern pike at 30 inches. Even though Bone Lake is a good jig lake we chose to use only suckers.

Upon arrival back at the cabin, we found that the weather for day three looked horrible; wind, rain and cold. You can fish in one or two but all three makes the outing absolutely no fun. Thankfully, when we awoke the next day, the weatherman had been off a bit. There was a bit of wind and some clouds with sprinkles but the temperatures remained pleasant. It was another great day to fish. The game plan was much the same as the previous, although we added other breaklines close to weed flats that had hard bottom. It took almost all day to get our first bite, and it was my turn on the pole. We don't let the fish eat the suckers too long, if you choose the quick strike hooks, they could harm the fish. Before we set the hook on a fish, we like to position the boat above the musky. We believe that it is the best way to insure you get a hook into the fish. With that said I reeled down until I felt the fish and then set the hook. It came to the surface, an average 36 inch fish; it then rolled once and threw the sucker back at us. Our bad luck changed less than a minute later when we had another bite. In fall muskies will school up on a good structure, this has been a common theme through our years of fishing. Always concentrate on the key structure; fishing fishless water is a waste of time, unless of course you are just in it for the boat ride. The second fish measured 40 inches, not our biggest ever, but now we had all caught a musky this year, so with that fish our day ended.

Day four arrived, cold, rain and wind. We all decided that today would not be a day for fishing and it was already scheduled to be our last day of the outing, so we headed home to our respective families. Just a short 6 hours later, and I was home in Elkhorn, WI, Steve was back in the Twin Cities and Tim safely landed back in Phoenix. The muskies will have to wait another year for us. Even if we hadn't caught anything we still would have enjoyed a great time with friends.