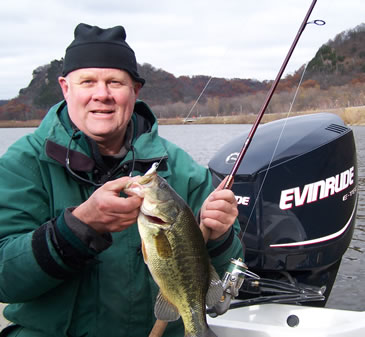 I just returned from a late-season fishing trip to the Mississippi River. We were fishing near Lansing Iowa. My fishing partners were Jim Hunt and Terry Fitzpatrick: Both work at the Cabela's store in Prairie du Chien Wisconsin and are expert anglers.

The Mississippi River had been at flood stage for several weeks, but was back down to normal levels.

A very strong windstorm had just gone through, with the wind turning the water to a chocolate milk color in the main channel and many of the backwaters.

And the water temperatures had dropped about ten degrees in the past few days. Often, these conditions create tough fishing. Often, but not always.

The first thing we did was locate a backwater area that had been protected from the wind. The water in that area was a little clearer. It was still cloudy, just not as cloudy as the rest of the area.

We started off throwing spinnerbaits and swim jigs. No action.

Then we switched to crankbaits. Jim and Terry were throwing short, fat crankbaits. That shape is very appealing to largemouth bass. I was throwing a #5 Flicker Shad, one of my favorite crankbaits. This bait is longer and thinner. That shape, I believe, appeals to a wider variety of fish species. Since there were walleyes and smallmouth bass in the area, I thought I could perhaps get some of them to eat the bait. I was wrong.

Jim and Terry were catching fish consistently. Since I wasn't getting bit, I decided to switch baits. I went to a #7 Flicker Shad and on my first cast caught a nice bass. I started catching bass just as fast as my boat partners. Here's why.

Remember, the water was cloudy. The #5 size bait ran down three or four feet on the cast, while the #7 size ran down about six feet on the cast. The bigger bait was bumping the bottom. It was running into rocks and disrupting the bottom. It was making noise, which made it easier for the fish to find. In cloudy water, you want a bait to make noise so the fish can find it easier. A small detail, but an important one. The #7 size is also just a bit larger than the #5 size, so the fish could see it just a little better. Another small detail.

We also noticed that some bass had the entire bait in their mouth, others were just hanging onto the back hook. After a few fish, it became apparent that the bass were inhaling the baits that were brighter in color, and just nipping at the baits that weren't so bright. They could see the bright baits better, so they ate them more aggressively. Bright baits are often better in stained water, more natural colored baits are better in clear water. Not always, but often. Another small detail that will put fish in the boat.

Too much of the time we attribute fishing success to a "magic" bait. And, sometimes there is a bait that's special. But if you pay more attention to the small details when you're fishing, I guarantee you're going to catch more fish.