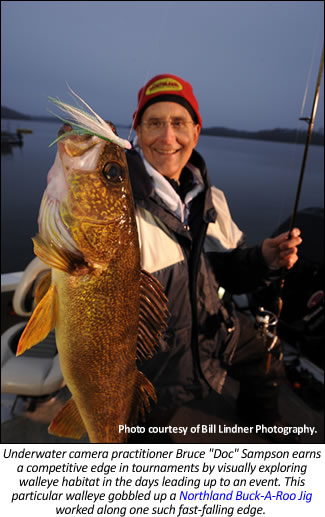 It's a little amusing to consider the level of technology that's been applied to the humble pursuit of angling. For a quest whose only core requirements are a hook, line, bait and sinker, the addition of military-level gadgetry can at times leave you feeling a little sheepish. Not that we mind the advantages.

Satellite-enhanced mapping software pinpoints our location on the lake, and guides us to potential hotspots. Sonar, too, continues to advance with brighter pictures and finer features. And thanks to once top-secret technology, it's even become possible to scan the water on both sides of your boat. There's nowhere left for the fish to hide, right? Perhaps not.

The reality is, despite how far we've come, most of the time, we still don't know what we're looking at on sonar-is it weeds, rocks, a sunken tree, a school of baitfish or a hefty gamefish? And even then, if the mysterious marks on the sonar screen are fish, how do we know whether they're bass, walleyes, or carp? (No self-respecting bass angler wants to burn valuable fishing time casting at the "bugle-lipped" variety.) Even more perplexing is the process of finding fish that hide in cover-burrowed into weedbeds, encased in brushpiles, hugging boulders or hunkered under boat docks. For a sonar unit, the task must seem a little like playing an unsolvable game of "Where's Waldo?"

Beyond all this is the fact that bass, walleyes and most other fish relate strongly to drop-offs. All anglers know this, and take it for granted. Yet due to the nature and shape of sonar signals, many of these drop-off fish never appear on the graph screen. As a result, anglers are bypassing some of the most untouched fish in their lakes.

It's for all these reasons and more that many topflight fishermen still rely on an underwater video camera, such as the breakthrough MarCum VS380. Whenever these elite anglers need to find fish and 'learn the lay of the land,' they bust out the camera. There is simply no better tool for finding fish-the "right" fish-as well as understanding their habitat. Unlike the virtual fish seen on sonar, camera information is reality.

It's roughly the same difference as watching the movie Bambi, or taking a long walk in the forest. The movie might give you a virtual slice of the wild, but a day spent in the woods gives you an authentic backwoods experience-the crack of twigs beneath your boots, the smell of pine needles, and a face-to-face encounter with a wild buck whitetail.

Bass anglers such as the famed Roland Martin, Bernie Schultz, Joe Balog and many others have at one time all relied on the visual advantages of a camera. The reality is, when bass need to be found, especially larger tournament winning fish that hide in heavy cover, tournament-tested anglers pull out their camera, and they certainly don't tell anyone about it. These devices truly are one of the only secrets left in the tournament game.

Bass Viewing Strategies
Whether bass are spread across broad shallow wood or weed-strewn flats, hidden under boat docks or concentrated along drop-offs, a camera remains the finest means of determining their location. The camera also reveals the species and size of fish, as well as precisely how they're positioned relative to cover or the bottom.

Viewing bass and the cover they live in is best accomplished by moving slowly along a breakline or over a flat with a foot-controlled trolling motor. With a compact system, such as the MarCum VS380, an angler can sit and cradle the monitor on his lap, while feeding and retrieving camera cable with a casting arm over the side of the boat. The entire system is protected from the elements with a weatherproof padded soft pack. 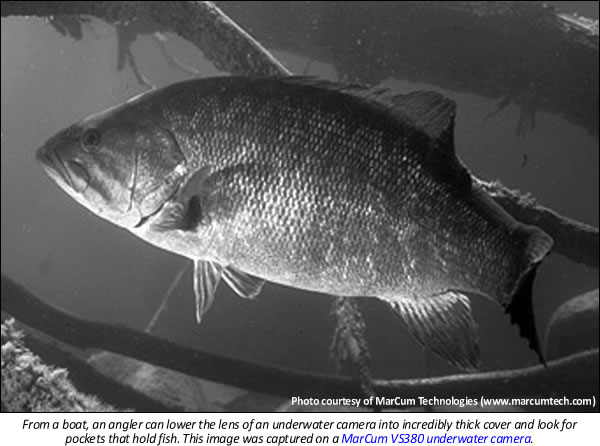 Meanwhile, specialized light-sensitive optics on MarCum's premium Sony Super HAD CCD adjusts to water clarity, and yields the sharpest picture possible at all times. The video is so vivid that several national fishing show producers record footage right off the MarCum system.

While cruising along at a steady speed, the camera "swims" along below, providing a wide 90-degree view of the underwater terrain. You can maneuver it easily through dense vegetation, over and alongside thick wood cover, even bump right up against boulders that conceal giant smallmouths. Some anglers even position their camera to peek under boat docks or thick matted cover, such as lily pads and hydrilla. By attaching the camera to a 15-foot telescoping pole, as Roland Martin has often done, it's also possible to see largemouths tucked well up under docks and other floating objects.

As many anglers have learned, it's one of the best ways to prefish a tournament. Use the camera to find big groups of large bass, all without having to put hooks in them or reveal to other anglers your winning school. Punch in a GPS waypoint, and return on tournament day to load the livewell.

"The reality is, despite how far we've come, most of the time, we still don't know what we're looking at on sonar -- is it weeds, rocks, a sunken tree, a school of baitfish or a hefty gamefish..."
Revealing Walleyes that Sonar Misses
Walleyes love drop-offs, but sonar signals don't. As the cone-shaped sonar beam reads along a steep break, blind spots occur that obscure fish from coming into view. Walleye tournament ace Doc Samson explains the phenomenon. "Often, the closest solid object to the transducer is the sloping edge to the side of the boat, even though it's not directly beneath the transom. In these drop-off scenarios, the sloping edge blocks or screens out a section of water. Usually, this sonar "dead-zone" lies at the pivot point between the base of the drop and the deeper flat. This is a key walleye concentration zone, which is often overlooked."

Samson suggests taking a camera for a test drive along one of these drop-offs. Watch how many walleyes you spot on the camera screen that don't show up on sonar. You might be amazed by how many fish you've been missing; how many fish you could have been catching.

Beyond the powerful fish-finding abilities of underwater cameras is the confidence they lend to your fishing. Rather than a virtual mental image of "pixel fish," the camera fills your mind with a clear and accurate picture of the whole underwater world. You see the low-slung jaw of a heavyweight largemouth, the white-tip of a walleye's tail. You picture precisely how they're positioned in relation to cover and structure, which tells you exactly how to present your lure. Almost before it happens, you perceive the strike-gills flare, the bait disappears, and your rod bends with deep surging arcs.

Most commonly associated with fishing on the ice, the underwater camera is the perfect companion in the boat - it's willing to stick it's head underwater and file reports; won't cut off your casts to the best spots; doesn't talk back; and stows easily away at the end of the day so you don't have to cover its tab at the tavern.