Where To Find'em In The Fall 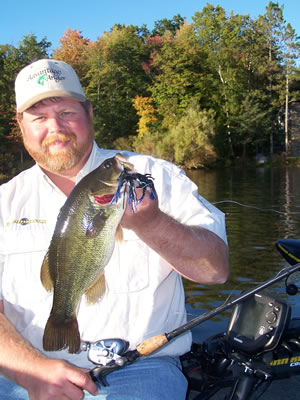 When you go fishing, if you want to catch a fish, it's really important that you put your bait where a fish lives. That might sound extremely basic, but the most basic concept of fishing is to fish where the fish are. You can have the nicest boat in the world, and you can have lots of expensive rods and reels and tackleboxes full of lures, but if you don't put your lure near a fish, all that other stuff is going to do you no good. Here are some ideas for finding different species of fish in the fall months throughout the Midwest.

Let's start with crappies. Crappies are abundant and popular almost everywhere. In the spring we catch them near cover like rushbeds and docks and timber in shallow water. In the fall, for the most part, if you fish those areas you won't be eating any crappies for supper. They're just not in the shallows in large numbers.

In some lakes the crappies will be on or near the deep weedline. The clearer the water, the deeper they'll be. Sometimes they'll be twenty five yards off the edge of the deep weedline. On a calm evening you can see them creating dimples as they suck bugs of the surface of the water. Throw two inch Power Grubs or Slurpies Swim'n Grubs on sixteenth ounce jigs and you'll catch crappies.

Crappies will also be found on the bottom in the basin of some lakes. Cruise the basin in twenty five to thirty feet of water with a close eye on our sonar. When you see a concentration of fish, work them with eighth or sixteenth ounce Fire-Ball jigs tipped with minnows. Walleyes can be in a lot of places depending on the lake. Different lakes provide different hang-outs. In shallow lakes, you can find walleyes on windblown points in two feet of water.

In deep, clear lakes they'll be in twenty feet of water or more on deep structure like rock piles or deep points. They'll suspend away from structure near baitfish in some bodies of water, and they'll go on a night-bite in some lakes. Research the lake you'll be fishing to determine where you should focus your efforts.

Largemouth bass will also be in different areas, but as the weather gets colder, you'll find fewer of them in the sloppy shallows that many inhabited during the summer. However, on a warm day in the fall, especially at mid-day, you can find them cruising reed-beds near deeper water. Reed-beds in six to eight feet of water that are close to cabbage beds in twelve to fifteen feet of water can be very good. The bass hold in the deeper water during cold conditions, then move shallower when there's a day or two of warmer weather. Throw a Pro-Model Reed-Runner spinnerbait, and add a four inch Power Grub to increase the bulk. Big bass like bulky baits in the fall.

The thing we need to recognize is that some lakes have a lot more options than others for fall fish. In some lakes there will be just a couple of types of structure that will hold fish: On other lakes you need to try different things to get bit. Keep that in mind and you'll find yourself getting lots of bites.