By Ted Jarosh - April 1, 2001
As the days begin to lengthen and warm, something stirs in the souls of coho salmon. They have spent the frigid winter as far south on Lake Michigan as they can go, in the belly of the bowl off Indiana. But as the lake ice breaks up and drifts away and the angle of the sun allows more precious solar penetration into the blue-green water, coho mass together like an invading army intent on taking and holding Sheboygan, Wisconsin.

They are the vanguard of the major Lake Michigan summer runs. First the coho march northwest, sweeping past the Illinois ports, breaking through the Illinois/Wisconsin border and marching through Kenosha,

Racine, Milwaukee as well as Port Washington, Wisconsin before they begin to disburse around Sheboygan. Next, chinook salmon move shoreward like silver reel stripping battleships in July and August, and finally the mature coho hit the ports in early September, to be followed by matured coho in October.

But it is this, the first coho run of the year, that trollers await with eagerness and anticipation. For there is no species of Lake Michigan trout or salmon more suited for the beginning or occasional big lake troller than the coho salmon, and there are no months better for pursuing coho than late April through May. It is then that coho are proximate to the shoreline and predictable in the presentations that will take them.

As mentioned, coho winter in Indiana, where they are taken by trollers right inside the harbors using No.3 J-Plugs in silver as well as red dodgers and green, blue or purple flies. From there, they migrate through Illinois, appearing off Land of Lincoln harbors by April 1st. By the third week of April, they show up off Kenosha, Wisconsin then Racine, and by the first week of May they are making a good showing off Milwaukee. From there, they move to Port Washington and Sheboygan.

Coho look for the warmest water available. That means in spring they occupy the upper 1/3 of the water column and key in on the stained water for its better heat holding ability. This water is most commonly found around and inside harbors. They will also set up over the tops of shallow reefs such as the lighthouse reef in Racine and the Green Can Reef south of Milwaukee.

Though they are rightly thought of as open water fish, in early spring coho can be right off rocky shorelines. I've often taken them in the little corner of the Milwaukee harbor where the rocky breakwall off the South Shore boat launch meets the concrete of the southern-most pier of the harbor.

The salmon's needs are few. They want to occupy water as close to their preferred temperature of 54º as they can locate. This warmer water stokes their internal metabolic engines and turns them into feeding machines. This is important because the two- to three-pound salmon you encounter now are the same eight- to twelve-pound egg- and milt-laden specimens that will show up off river mouths in October.

They need to pack on weight and do it fast. All this is good news for the owners of modest 17- and 18-foot boats, for the coho can be reached in the relative safety of inner harbor water. They also occur just outside the harbor gaps or, at most, after only a short run a mile or so offshore. When periods of west wind lay the water near the western shoreline flat, salmon fishing for spring coho is as safe and easy as it gets all year. 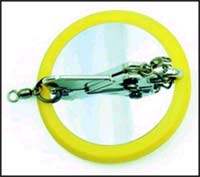 red dodger and another nine inches of stout line to a fly. Most flies are combinations of white or pearl and blue, green or purple. They range in length between one-and-a-half and four inches and some feature little spinners as an added attraction.

About the only modification I make on my flies is the addition of a tiny treble "stinger" hook to the main hook shank, held in place by a plastic sleeve. If you don't have anything else, a short cross-section of plastic worm will work to hold the stinger, but this plastic quickly is scarred and weakened by the mouths of salmon and should be replaced often, lest you lose your little treble and a salmon with it.

There is a single drawback to the stinger hook addition, which is being the propensity of coho salmon to twist and turn once netted. These little trebles are unusually adept at finding net mesh to split and hook, which makes the unhooking process take longer. It could be that you would rather just stick with the single hook on your flies and suffer through losing a few more salmon during the fight. That's up to you.

One mistake I once made is that I tied up a bunch of coho flies on some thin wire Aberdeen hooks. They worked just fine for the coho and were so good at holding fish that I didn't have to resort to the bothersome stinger hooks in order to hold onto most of the fish that hit. However, I paid the price whenever a big steelhead would hit. The torpedo would smash the bait, make a sizzling run, straighten out the overmatched hook and leave me reeling in a dead line. So don't make that mistake. I've made it for you.

Twenty-plus-pound line between the dodger and fly not only provides safety of line breakage should a big steelhead snap up your fly, but it also is less flexible than thinner diameter line, telegraphing the snap of the dodger more effectively to the fly. The salmon are not at all line shy and don't seem to mind this thick connection as much as you might imagine they would. This total package of diver, dodger and fly are as effective a coho salmon taker as you can find, day in and day out. While tiny spoons and diving plugs will take some fish, the dodger and fly are far and away the most consistent producers. My first inkling that this was fact was back when I used to observe the charter boats going out from the harbor with their groups of paying guests.

Through May and June, virtually every rod was adorned with a dodger and fly. Only in July when chinooks began to appear did this change to a predominance of spoons. If the guys who make their living salmon fishing choose dodgers and flies, who was I to argue? About the only way you can err with running dodgers

and flies is to run them at the wrong speeds. The key to boat speed and thus presentation speed is that you must realize you actually need to key in on two separate speeds. You need to find the speed that will cause your dodger to snap back and forth but not spin when trolling with the wind, and then you need to find the somewhat higher speed that will attain the same results when trolling back over the school of fish against the wind. Failure to do so will create a situation where the fish will only hit when you troll in one direction. This eliminates half your fishing time as you move back through the fish unproductively until you can turn back over your school and again begin taking fish.

So, the trick is to find a speed that will get that dodger snapping back and forth, but not spinning, on your downwind pass. If you are over fish, you should be taking them. Then, mark that speed in your mind by viewing the throttle or through your RPM or boat speed indicator. When you turn and troll into the wind, raise a dodger and fly and watch it. It may now be hanging limply in the water or exhibiting only the laziest of wobbles due to a trio of influences: wave, wind and current action up against your boat. Now keep that dodger combination at boat side as you nudge up the throttle until the dodger begins giving you the action you need. Once that is attained, reset the "test" rod and troll back towards the fish. Mentally mark your upwind speed setting. Now you have very effective trolling speeds in both directions, and that is what you need to keep the action coming.

Your targets are one- to three-pound "jack" coho salmon. They are without question the best tasting salmon or trout you will take from the lake all year. Since these salmon are stocked using sportsman's dollars and since reproduction on our side of the lake is minimal, there is certainly nothing wrong with taking a limit for the freezer.

On those rare times when you can't get coho to hit using this dodger presentation, go to planer boards. I have had trips, admittedly few, when coho seemed to be boat shy and simply would not hit Dipsy Divers, which by nature remain proximate to the boat hull. That is when you need to get out the planer boards, either individual boards like Yellow Birds or big mast boards, which you can use to run multiple lines off the heavy board line by means of clips.

Let out 10 winds of line on level wind reels with a dodger and fly with a few magnum-sized split shot or snap weight, replacing the Dipsy. This weight is needed to sink the dodger and fly so that it doesn't simply wallow on the surface. Then clip the line into a Yellow Bird, Off Shore or other planer board and run them out beside the boat. Strikes are detected when the rod starts bouncing and the planer begins moving back behind the boat.