By Bill Schultz - July 1, 2010
It's mid-summer. You are on a clear water lake, working the shallows with a Booyah Buzzbait, looking for that trophy bass. All of a sudden, the calm surface explodes and flying from the depths is the biggest bass you've ever had on the end of your line. After an amazing battle, you lip a six-pound largemouth. By the time your heart stops pounding; you've quickly taken a photograph and released the beauty.

What makes this picture even more special is that you're on a lake with no boat launch and a shoreline that would make shore fishing or wading difficult. This isn't a problem for 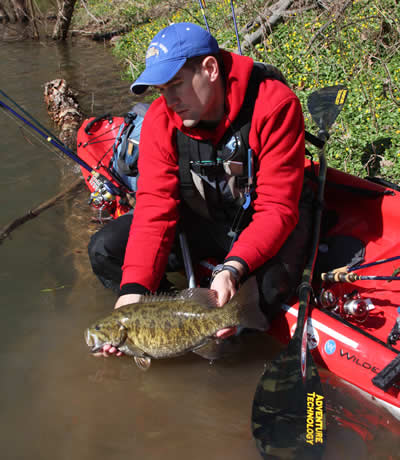 you because you are fishing from your kayak. After parking along the road closest to the lake, you were able to easily launch, opening the door to some spectacular bass fishing.

This scenario is playing out more and more as kayak fishing is becoming ever more popular for a variety of reasons. Yes, some of this type of fishing could be done from a canoe or other carry-in craft, but many are finding the stability, speed and ability to maneuver in wind, evidence that the kayak is a great fishing craft. In fact, Jeff Little, author of In Pursuit of Trophy Smallmouth Bass - My Life in a Kayak, owner of Blue Ridge Kayak Fishing and fellow Wilderness Systems Kayak Pro Staffer says that "wind" is what got him into kayak fishing. He tells me, "fishing the upper Potomac, soloing a 17' aluminum canoe on an intensely windy day got me thinking of a different way." Jeff discovered that kayaks, with their lower profile, allowed him to get to some great spots and not be blown off of them if the wind is howling. He found immediately, "when the bite is on, as is usually the case on windy days, that alone is worth making the choice to kayak fish."

Paul Lebowitz, editor of Kayak Angler magazine, notes, "I can fish where others can't, in the weediest and rockiest locales where fish rarely see a hook. I don't need a road or a launch ramp, the faintest trail will do." He says, "the kayak is amongst the least expensive ways to go from a shore pounder to an on the water fish-seeking missile. These rides are tough too, there's no need to baby them or go all spit and polish. That means I spend my time fishing, not paying bills or cleaning the boat (again)."

Lebowitz tells me, "I like kayak fishing because it's as close as I can go to battling fish in its own element without swimming. Success or failure rests on my shoulders alone; there's no charter captain to blame. Kayak anglers are immersed in the elements, rain, sun, wind salt spray, and fade into wild surroundings. You can feel nature's pulse."

Chad Hoover, Wilderness Systems Pro Staffer, author of Kayak Bass Fishing and founder/owner of www.kayakbassfishing.com, states, "the most amazing part of kayak fishing to me is the water it opens up and the economic barriers that it tears down for all of us to enjoy the great outdoors to a greater extent that we could before."

I love chasing smallies on the big waters of Door County in my Crestliner with Mercury OptiMax, but there are so many lakes and rivers in Wisconsin and other states that just scream for a kayak. These are bodies of water that I can now fish, where in the past I just wished I could. I actually enjoy combining my wading and kayaking on some of the rivers I fish. Using the kayak to get from one good wading location to another is much more efficient than trying to traverse deeper water by walking the shoreline. And, some of those deeper holes that do hold fish can now be fished efficiently.

Hoover firmly believes, "the kayak is the most effective and versatile platform for pursuing trophy bass anywhere, offering virtually unlimited flexibility and access. I believe that state and world records for the major bass species will eventually be challenged or felled by a kayak fisherman."

In talking about George Perry's 22-pound, 4-ounce world record from 1932, Hoover believes, "the guy who caught the benchmark fish was in a small boat that was quietly maneuvered through some secluded, nameless oxbow - not perched on the deck of a logo-emblazoned bass rig in a popular lake where the catch would be expected."

Scott Null, co-author of Kayak Fishing - the Ultimate Guide and owner of Let's Go Fishing Guide service in Texas, says, "it sounds crazy to those who have never heard of it or experienced it, but kayak fishing is currently one of the fastest growing sports in America. Even the most ardent wade anglers and skiff anglers are easily lured into kayak fishing by its ease of use and the access it provides to new waters."

Like many, I don't enjoy crowded boat launches. For me this has been another great advantage to my kayak fishing and something I've talked about for years in my "wading" for smallies seminars, not having to deal with boat launches. Hoover points out, "in more accessible fishing waters, driving past a line of angry fishermen at a boat ramp waiting to launch will remind you that your experience is untainted by that frustration and anxiety."

He also makes the point, with which I agree, that, "the popularity of kayak fishing will only broaden as rising fuel prices, a global recession and increasing environmental regulations force fishermen to consider alternative methods."

I'm not a tournament angler and have always tried to enjoy as much as possible the "experience" of fishing, whether in my Crestliner, kayak or just wading. Hoover agrees, and notes, "the kayak offers a fishing experience like no other. It is an enjoyable way to fish if you're just trying to catch more fish, many fish or just any fish."

There are so many positives to kayak fishing, with one being its simplicity and cost, compared to fishing out of a powered boat. I fish from a Wilderness System's Tarpon 140 Angler, which is a sit-on-top (SOT) and the new Commander 120 Angler, which is a hybrid kayak/canoe with pontoon hull that is extremely stable for standing to sight fish. In the angling versions, these kayaks range in price from $1,050 to $1,195, and without the angling package, from $875 to $995. The two other key pieces of equipment are a personal

"The popularity of kayak fishing will only broaden as rising fuel prices, a global recession and increasing environmental regulations force fishermen to consider alternative methods."
floatation device (PFD) and your paddle. A PFD can range from $25 to over $100 if you get one like I use by Harmony that is designed specifically for kayaking. I have become a big fan of the ergonomically designed paddles by Adventure Technology that are extremely light, comfortable and help align your wrists, elbow and shoulders, which reduces stress on your body. These start at under$200.

As noted, I've kept it simple. I do have a rudder on my Commander, which is very helpful in the wind for tracking and to hold a position easier. Rudders can add about $200 to the price of a kayak. As anglers get more into it, they might add a locator, additional rod holders, anchor trolley and tackle storage. To this point I've been fine with two flush mount rod holders that come with the angler package with the Wilderness Systems kayaks. These are located behind the seat and just in front of the tankwell. This year I've begun using a PrecisionPak CratePak in the tankwell. This great piece of gear holds tackle, small cooler, additional clothing, rain gear, and even has built in rod holders to carry additional rods.

Many of us enjoy the exercise bonus to kayak fishing as we paddle to our favorite spots and then from spot to spot. The past few years some fishing kayaks have been designed with or set-up for, trolling motors. A couple even have pedal-powered propulsion. Kayak length should be a consideration. Kayaks less than 11 feet are considered short. Those from 11 to 13 feet are considered medium length and longer kayaks would be those over 14 feet. I prefer a kayak of at least 13 or 14 feet for lake fishing, as they are faster and will cut through waves better. If you primarily fish rivers, then a 10 to 11 foot kayak might be best, as they are more maneuverable. And, if you fish both lakes and rivers, you might consider a medium length kayak.

Another consideration as you think about kayak fishing is how you are going to transport your kayak. Trucks work great, and a number of companies make car racks and kayak trailers. I've had great success with my Malone Kayak Racks and have just begun using their MicroSport Trailer, which can be pulled by vehicles of all sizes and eliminates lifting your kayak to the roof of a car or SUV. However, Malone's SeaWing racks have a Stinger Load System that makes getting your kayak on the vehicle by yourself very easy.

All three of the books I mentioned earlier can be a great way to get started, along with Kayak Angler Magazine and Kayakbassfishing.com. I would also be happy to answer your questions. You can email me at [email protected]. Give kayak fishing a try; you will come to love it like I have.