For the Love of Muskies

By Ted Pilgrim - May 1, 2010
Catch-and-Release lessons from a toothy-critter master - with Pete Maina 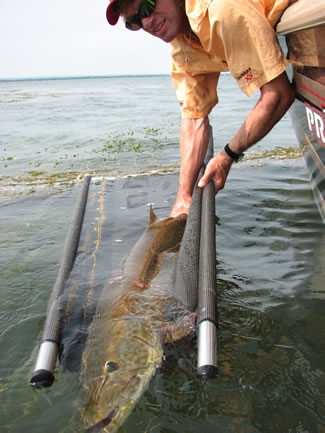 Pete Maina has in his day handled thousands of big muskies. Ex-guide, lure inventor, TV personality, angler extraordinaire, Maina has worn many hats. Today, while he remains a zealous hunter of the big green fish, his real crusade is a message of placing fisheries first.

"No one is handling more muskies each and every day than we, the anglers," states Maina from his home in the muskie-rich region of Hayward, Wisconsin. "Not biologists, not lakeshore associations, tackle salesmen or legislators. Fishermen play such a huge role in actively determining the health of our muskie waters-in essence, we're the real managers of the fishery.

Maina continues: "If it's good for the fish, it's good for the fisherman. What's happening with our muskie waters is proof enough. We really owe ourselves a collective pat on the back. Attitudes on catch-and-release have vastly improved. Our muskie fisheries are largely in great shape. In many waters record-class fish aren't just a dream, they're a realistic goal for any hardcore angler. That's because catching and releasing muskies properly works; if it didn't, fishing wouldn't be nearly so good today."

Still, despite great strides in catch-and-release fishing, Maina believes anglers continue ignoring two essential practices for safe, healthy releases. "Preparation, along with the use of proper release tools are key. Most of us labor for hours studying the things that help us catch fish. We'll spend big money on rods, reels, electronics and lures, but neglect buying the proper release tools.

"Just as important," Maina offers, "is the planning and execution of a solid muskie release plan; a premeditated strategy that helps you safely, quickly return muskies to their habitat. Doing this throughout the season goes far toward sustaining a healthy muskie fishery. That means more and bigger fish available for everyone to catch."

The first part of a release plan, Maina says, is assembling a "conservation kit"-a collection of tools that ease the unhooking and release process, while also assuring the health of the fish. "Start with a premium fish landing device. I don't think there's a better net for landing and releasing muskies than Frabill's Kwik Kradle. It's really a net-cradle hybrid-an intelligently crafted design-that simplifies the landing process, as well as facilitating easy unhooking and measuring of fish."

The Kwik Kradle, a completely original concept in large landing nets, couples a unique "open" hoop design with a specialized padded, knotless netting material. "The soft, treated netting offers the most tangle-free solution I've seen-it's easy on fish, prevents them from rolling in the netting, and it seems to last forever. Plus, the net is easy to use if you're fishing alone."

While this all sounds good, Maina mostly judges a net's merits by fish pictures. "I see a lot of photos of muskies with net damage. Some nets tend to scrape and cut the skin of muskies; this is usually caused by rough mesh material or nets that let fish thrash and roll. During the years we've used the Kwik Kradle, I have yet to see net damage on fish in our photographs."

Maina also likes the fact that the net acts like a muskie 'holding pen.' "My first priority is to separate the fish from the lure, then to be certain that the fish's head is in the water and breathing properly. I've got all the necessary tools at arm's length. Slip the fish into the cupped hoop, and let her relax inside. Its weight is fully supported by the Kwik Kradle's flat bottom panel. I can easily reach in with a longnose pliers and grab a hook, or use a Knipex to cut deeply imbedded hooks or hooks planted in sensitive areas (eyes, gills.) For inside-the-mouth hooks, I'll employ a good set of jaw spreaders, too, which can save your hands, your lure and the fish. A set of split-ring pliers can come in handy to replace cut hooks on lures."

Hook removal aside, he cautions that two of the biggest stressors for muskies are warm water temperatures and big waves. "Hot water contributes greatly to delayed mortality of fish that are already stressed from fighting and release. When surface waters exceed 70-degrees, fish handling should be minimized. Meanwhile, big waves stress fish further because it's harder for them to maintain their equilibrium at the surface. Time spent photographing and measuring fish in these scenarios should be kept short."

Although the current trend in gauging muskie and pike size is to measure length and girth, Maina offers a compelling alternative. "In Europe, where giant pike are repeatedly caught-and-released, the standard procedure has long involved weighing fish in a 'weigh sling.' The benchmark for sizing European pike-even for released fish-isn't length, but weight. It's the most accurate measurement of true size we have.

"Same thing should apply to muskies. It's popular now to take length and girth measurements, plug them into a formula, and estimate the fish's weight. But why? Doing all the things necessary to take accurate length and girth measurements takes time and effort; often requiring the fish to be out of the water and handled extensively; this where a lot of damage is done to fish."

"Nowadays, some of the better anglers I know aren't so worried about the exact size of the fish. A safe release is more important. Still, if you've got a fish that's tickling record size, consider a method by my friend, Georgian Bay guide Johnny Dodson. He uses a cradle to weigh fish with a handheld scale. It's faster, much easier on the fish and infinitely more accurate." With the fish safely inside the mesh, you can even hang a scale right on the landing net's hoop and weigh everything (ultimately subtracting net weight). Or you can quickly transfer the fish from the net into a damp Frabill Musky Cradle. Attach a scale to the middle of both poles, and weigh. The Musky Cradle even includes a built-in 60-inch measuring stick, if a quick in-water release is desired.

Maina offers a few additional comments on preventing damage and assuring safe releases. "Right now, for instance, we're developing a new series of big game hooks for Mustad that feature reduced barbs. By reducing the barb size on large single or treble hooks, you can minimize potential damage to the fish. Reduced barbs hold just as well, yet make boatside unhooking chores easier. Simply file a three-sided knife-edge from barb to hook point, shaving down barb size by half or more." It's another positive move in the name of fisheries first.

"Something retired Wisconsin Department of Natural Resources Chief of Fisheries Lee Kernen once told me sort of puts things in perspective. Kernen said, 'There simply aren't enough trophy muskies alive for each angler to keep one as a personal trophy.' I'll take this one step further, and say that even if only 1 in 100 muskie fishers wanted to keep one, there still wouldn't be enough big ones swimming out there.

"Muskies can be one of the meanest freshwater predators swimming-it's part of why we cherish catching them. But once they've been caught, they become one of the wimpiest, most fragile fish. Getting people excited about fish health should be the goal of the next generation. Because the bottom line is, you can't catch fish that aren't there. Lucky for me," Maina jests with a grin, "I know a lake or two where the fish and I are on a first name basis."