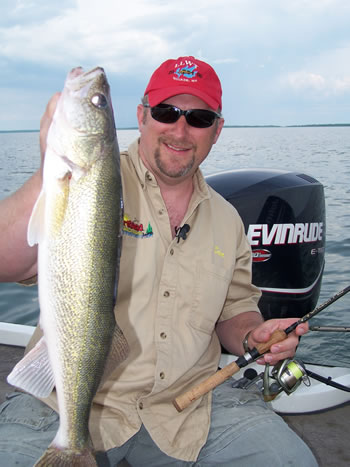 For other folks, there is also no decision. They are going to keep the fish. Fish are good to eat. If I can have fun fishing and take a few home for the supper table, I will. Nothing wrong with that either.

But there are lots of anglers in the middle. They go fishing mostly just to go fishing, but every now and then they want to take a couple home. If you're one of those anglers, it's really important that you consider the fish you take home. Some fish are better for the table, others are best put back to catch again next time.

In the spring, crappie and bluegill action can be pretty good in some bodies of water. Over-harvest is a real possibility, especially in areas that have no limits on these species. It used to be thought that if you wanted to keep fish, panfish were the species to keep. It was thought that keeping them in good numbers would prevent the population from stunting. It is now apparent in many areas that over-harvest prevents them from reaching a decent size. It's ok to keep a few panfish for a fish supper, but it's good to release them also.

If you're after walleyes, you really need to pay attention to the regulations. Many lakes have gone to a slot limit. In most slot-lakes, all walleyes between, for instance, seventeen and twenty five inches, must be released. You can keep a few walleyes under seventeen inches, and one over a certain size. Lakes with slot limits like this are usually very good lakes for fishing. On the right day you'll catch a bunch of fish and be able to keep a few. That's a win for most anglers.

Some fish, for the most part, should be released. In most situations, largemouth and smallmouth bass should be put back. Same is true with muskies, and also with northern pike over five or six pounds, and walleyes over four pounds. There are exceptions, but for the most part, these are good rules of thumb.

There is certainly nothing wrong with keeping a few fish, but when we take too many for too long from a body of water, we're harming that body of water. Next time you go fishing, keep the fish population in mind before you put too many on your stringer.